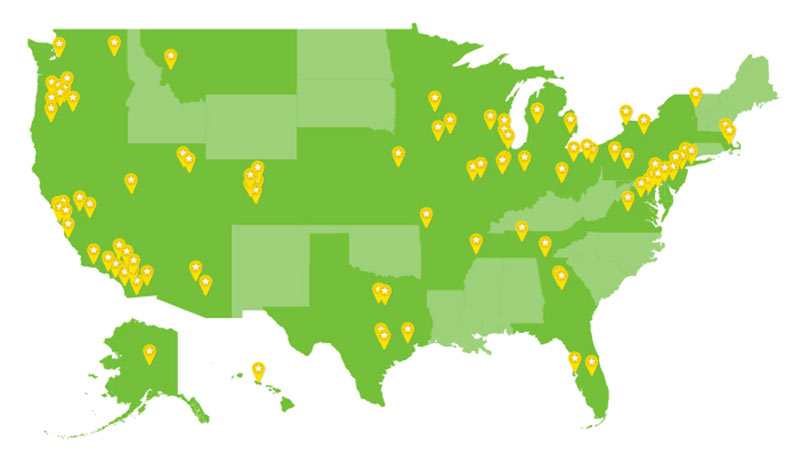 Have you ever pedaled along a real Protected Bike Lane? A bike lane separated from the stress of fast-paced streets filled with speeding motorists that gives cyclists of all ages the security and safety to travel in a way that makes them feel comfortable? There’s no comparison between a standard bike lane and their protected counterparts.

Louisville still doesn’t have a true Protected Bike Lane. And Kentucky is one of 16 states without any such bike facilities. According to a new infographic from PeopleForBikes kicking off that organization’s National Protected Bike Lane Week, some 82 cities in 34 states already boast Protected Bike Lanes and the boost in cycling numbers they bring with them.

Let’s walk through some of the data collected by PeopleForBikes in its infographic to learn a little more about what makes Protected Bike Lanes so special. And, of course, don’t forget to make a public comment to Move Louisville saying you’d like to see Protected Bike Lanes built in our fair city (you’ve got to scroll all the way down for the form).

The best Protected Bike Lanes, of course, offer the most separation from the street, whether with raised planters, a parking lane, or even just a sturdy concrete curb. Check out some great examples from around the country here and here and here.

While Louisville’s best bike lanes try to offer as much of a buffer from the stresses of traffic, the infamous “door zone,” and more, they’re still limited by their design, especially along many state roads like this example along Westport Road.

As mentioned above, Protected Bike Lanes are growing up across the country, with residents of 82 cities in 34 states already enjoying their benefits of safer, stress-free bicycling.

According to PeopleForBikes, Protected Bike Lanes have doubled every two years. And with cities like Louisville with so much potential for implementing these kinds of designs, there’s plenty of room for growth.

But beyond simply making bicycling more pleasant, data show Protected Bike Lanes are really effective at building a booming bicycling community and getting people out on two wheels. That’s something that could help us achieve the goals set out under the Move Louisville plan.

According to PeopleForBikes, new Protected Bike Lanes built in other cities boosted bike counts by an average of 75 percent in the first year alone. Big winners included Austin’s Rio Grande lane that boosted counts 126 percent and Chicago’s Dearborn lane, which sent bike counts soaring. And that means as more people see others using the bike lanes, more are likely to do so themselves.

As I began above, one of the greatest strengths of a Protected Bike Lane is its ability to make riding a bike easy and comfortable—and that’s what it’s going to take to build upon Louisville’s already growing bike network. According to PeopleForBikes, a well-designed Protected Bike Lane designed with a landscaped buffer to traffic is seven times more likely to attract cyclists than a conventional striped lane.

That comfort—combined with a meaningful design that separates lanes from traffic—easily translates into increased safety associated with Protected Bike Lanes. According to PeopleForBikes’s research, installing a Protected Bike Lane on a street cuts injury risk to bikes by 28 percent.

But also according to PeopleForBikes, Protected Bike Lanes benefit everyone on the street—bicyclists, pedestrians, and even motorists. “Protected Bike Lanes bring order to the street,” the infographic reads, “chilling everyone out.” Among non-biking adults, a 2013 survey shows that 79 percent preferred driving on a street with a protected bike lane versus a 68 percent preferring a street with no bike markings.

There’s more, too. Protected Bike Lanes are correlated with spikes in economic growth. The PeopleForBikes infographic points to the wildly successful Indianapolis Cultural Trail that opened in 2010. After that bike path opened, the number of building permits of issued in the surrounding Zip Codes rose 112 percent as a share of citywide permits.

Among the theories that go into this type of build it and they will come infrastructure is the physical investment in the streetscape they bring, helping to further beautify a place for all people. A typical painted stripe of a bike lane doesn’t instill confidence that a high-quality bike lane will continue to be located there. It can fade, be rerouted easily and any investment a shopkeeper wants to make could go down the drain with it.

Back to safety, Protected Bike Lanes continue to promote safe streets for everyone. As we’ve discussed here before, sidewalk biking is a symptom of the larger issue of bike safety in cities. It doesn’t make it right, and we’re certainly not encouraging sidewalk biking, but we need to figure out what’s keeping bikers on the sidewalk and off the streets.

In Hawaii and across the country, installing Protected Bike Lanes has helped solve problems of bicycle riding on sidewalks in very elegant manner.

Besides, Protected Bike Lanes add another layer of safety for pedestrians trying to cross the street. In New York City, the infographic points out, “pedestrian injuries plummeted on streets where [Protected Bike Lanes] were installed in NYC.” It’s all about design, and these bike lanes help organize a street around safety.

Here in Louisville, where our 20-year transportation plan, Move Louisville is trying to remake dangerous state arterials like Dixie Highway, Preston Highway, and others, Protected Bike Lanes offer one distinctly successful way in which to reorganize our streets, making them safer places for cyclists, pedestrians, and motorists.

For sure, just adding a Protected Bike Lane to a street and calling it a day is never the right solution—attention to detail, targeted investment, and good design are all needed to make Louisville’s streets safer. Let’s get busy with Protected Bike Lanes.