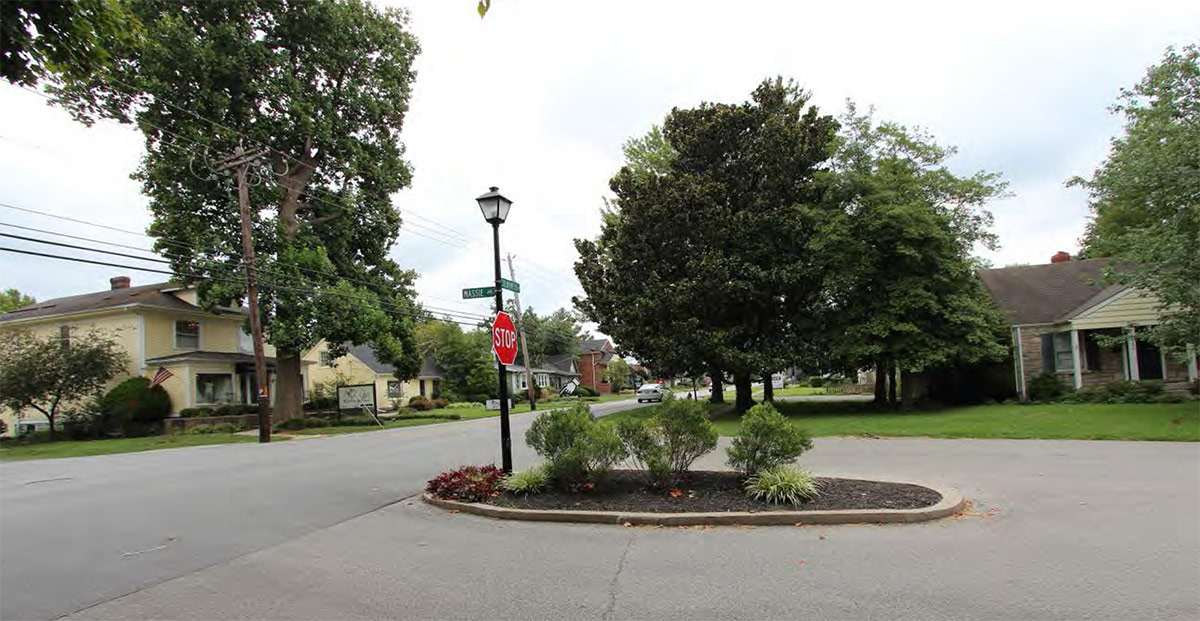 The Kentucky Transportation Cabinet (KYTC) sponsored another public information meeting this week at Broadway Baptist Church to discuss Chenoweth Lane through St. Matthews. The Monday meeting was ironically situated along one of KYTC’s own dangerous-by-design corridors, Brownsboro Road.

As at previous public meetings, the now-revised proposals to update Chenoweth Lane were presented via video, traffic animations, and stationary displays attended by a variety of contracted and state traffic engineers and representatives. There was no formal presentation, nor opportunity for public Q & A. Near-unanimous opposition and a lack of supporting traffic data have prompted the removal of an option to widen the corridor with a third center-turn lane, as previously reported by Broken Sidewalk.

The only vestige of this speed-inducing component is a center-turn lane at the intersection with Massie Ave., which was itself met with some controversy.

Additionally, bike lanes and shared-use paths have been deleted from the proposals.

The remaining discussions focused on drainage improvements, curbs-and-gutters, addition and improvement of sidewalks to ADA compliance, repositioning of utilities, and the like.

Neighborhood advocates expressed cautious optimism related to these outcomes, and the seeming responsiveness of KYTC to community input. Councilman Bill Hollander (D-9) mirrored this sentiment. “I am glad that KYTC listened to the views and concerns of constituents and removed the option of 3-lane widening throughout the corridor,” he said. “This is the way the planning study process is supposed to work.”

The optimist in me agrees with the councilman.

On the face of it, the community spoke up for safe, sustainable, and sensible neighborhood design. The government listened. A compromise was reached. A grassroots neighborhood organization, STOP The Widening of Chenoweth Lane, set an admirable example for organizing to oppose unwelcome and unnecessary government expenditures. And they did it in a way that protected the individual property owners in the neighborhood, but also served the common good of the city—a city struggling to promote fiscally and environmentally sustainable development, safe and livable streets for all users, and independence from an overbearing and unchecked state DOT.

All the same, I wonder.

I wonder why—in this era of decreasing traffic projections, increasing budget constraints, and a growing focus on complete streets—why this project to widen Chenoweth Lane (and yes, the intent of KIPDA ID #213 was widening, despite KYTC’s party line to the contrary) came to the table in the first place? Money to burn?

And what happens in our other older, walkable, and often less-prosperous neighborhoods, when no one’s really watching? What if there is no organized, dedicated, and persistent resistance as there was in this scenario?

The latest transportation development plans represent a frustratingly persistent mantra which equates pavement to progress, and a stack of highway regulations and industry-funded studies supporting regulations which are too-often antithetical to safe and livable neighborhoods. Which other city streets might suffer the fate of “improvements,” which, at best, are one step forward and two steps back?

And, from a broader perspective, why is this always such a battle? Why is it vastly easier to snuff out a road diet (think Brownsboro Road from Ewing to Hillcrest, think Lexington Road from Grinstead to Liberty) than it is to stop a road-building binge?

How many levels of malfunction within our various federal, state, and local transportation and planning agencies does it require to justify spending $1.8 million to widen a neighborhood thoroughfare that works just fine as it is?

I’m reassured, somewhat, by Chris Glasser’s recent piece at Broken Sidewalk regarding a new way to look at funding for Louisville’s streets—streets which prioritize the safety of all users. Will our transportation agencies get on board?

In the meantime, shift your focus down Frankfort Avenue to Stiltz Avenue and Hillcrest Avenue. That unique, neighborhood-defining, traffic-calming node is on the list (KIPDA ID #287), too, with a stated budget of over $1.4 million. Not that a few safety improvements there wouldn’t be welcome. But we know how that goes.