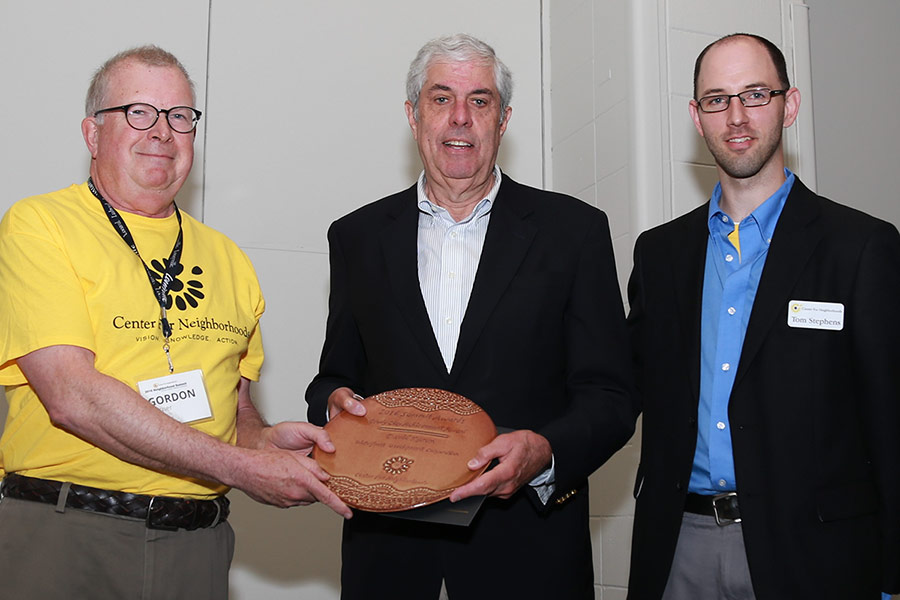 In the past couple months, a number of important awards have been handed out across Louisville and Kentucky. Here’s our roundup of some of the biggest in the worlds of urbanism, design, preservation, and neighborhood achievement. Congratulations to all the winners!

First up is the Grady Clay Award, given out by the Center for Neighborhoods to “a citizen whose public life and work emphasize local and regional planning and design; and who has operated at a national level while maintaining nourishing roots within their home community.” It’s the center’s highest honor. The award is, of course, named after Louisville’s famed urbanist Grady Clay who spent decades observing Louisville as urban affairs correspondent at the Courier-Journal, editor of Landscape Architecture magazine, and as a contributor to WFPL.

This year’s Grady Clay Award winner is David Karem, president of the Waterfront Development Corporation (WDC), pictured at top. The WDC noted that Karem was selected for the award in part because of “the once pie-in-the-sky dream of revitalizing the industrial Louisville waterfront” into Waterfront Park.

Speaking of Waterfront Park, the landscape architects behind the project, Hargreaves Associates, were awarded the prestigious Cooper Hewitt National Design Award in Landscape Architecture this past May. The firm will be feted alongside prominent winners in architecture, communication, and interior design, among others, during National Design Week, this October 15–23 in New York City.

An awards gala at the Cooper Hewitt National Design museum is planned October 20. First Lady Michelle Obama is this year’s Honorary Patron for the National Design Awards, now in its 17th year.

Besides Louisville’s park, the San Francisco– and New York–based firm has also worked on the 274-acre parklands for London’s 2012 Olympics and Crissy Field in San Francisco, among many other high-profile projects. Hargreaves has been a leading practitioner for more than three decades.

Back in Louisville, the Center for Neighborhoods also handed out its first award for the Neighborhood Association of the Year. The award recognizes “a neighborhood association or homeowner association that has used innovation and visionary thinking to positively impact the future of its community and its organization.” The award is named for the center’s retired director, Jack Trawick.

This year’s co-winners are the Shelby Park Neighborhood Association and Portland Now. The center noted that Shelby Park was chosen in part due to its “work over the years to improve vacant and abandoned housing, creating public art, planting hundreds of trees and working with a number of organizations including New Directions Housing Corporation, MSD on the Logan Street CSO Basin,” and many others.

“Lots of work remaining, but the acknowledgement tells us all that we are on the right path,” Rogalinski wrote in an email to his neighbors. “Thank you all for contributing to the improvements and assistance in the Shelby Park neighborhood.”

Other awards from the Center for Neighborhoods included the Neighborhood Leadership Award, presented to Lisa Santos of the Irish Hill Neighborhood Association; the Collaborative Community Partner Award, given to the West Jefferson County Community Task Force and accepted by Interim Director Arnita Gadsen; and the Local Government/Public Official Award, bestowed upon Mayor Bill Dieruf of the City of Jeffersontown.

In May during National Preservation Month, the Ida Lee Willis Memorial Award was given to an individual “who has demonstrated outstanding dedication to the cause of historic preservation in the Commonwealth.”

This year’s winners are 21c Museum Hotel founders Steve Wilson and Laura Lee Brown. The team has renovated historic buildings in Louisville, Lexington, Cincinnati, and many other places to house their award-winning modern art museums and hotels.

Additionally, the Ida Lee Willis Memorial Foundation and the Kentucky Heritage Council recognized one Louisville project (of three award winners across the state) for a Preservation Project Award. The project award recognizes “outstanding examples of rehabilitation or preservation of historic buildings, or other types of projects that have had a significant impact on Kentucky’s built environment or historic or prehistoric places.”

The Louisville winner was the renovation of the Ouerbacker Mansion in the Russell neighborhood by Oracle Design.

The 7th annual Joan Riehm Memorial Environmental Leadership Award is a distinction for “public service employees, volunteers or students who have gone to great lengths to make Louisville a clean, green and healthier place to live, work and play.”

This year’s award was presented by Mayor Greg Fischer to 13-year Metro Councilman and 8-year Alderman Tom Owen. Owen will finish his term as Metro Councilman this fall and continue on as a professor at the University of Louisville. He has served as a history instructor, archivist, and community relations associate at the university since 1968, according to the city.

“Councilman Owen, like Joan Riehm, is a model public servant,” Mayor Fischer said in a statement. “For decades, he has not only advocated for but also led by example on issues like biking, recycling, reuse, historic preservation, and more.”

The award is named for Joan Riehm, the first female deputy mayor of the city of Louisville in 1985. Riehm also helped add the city to the Partnership for the Green City, a joint effort of Metro Louisville, U of L, Jefferson County Public Schools, and the Jefferson Community & Technical College, to improve sustainability in the community.