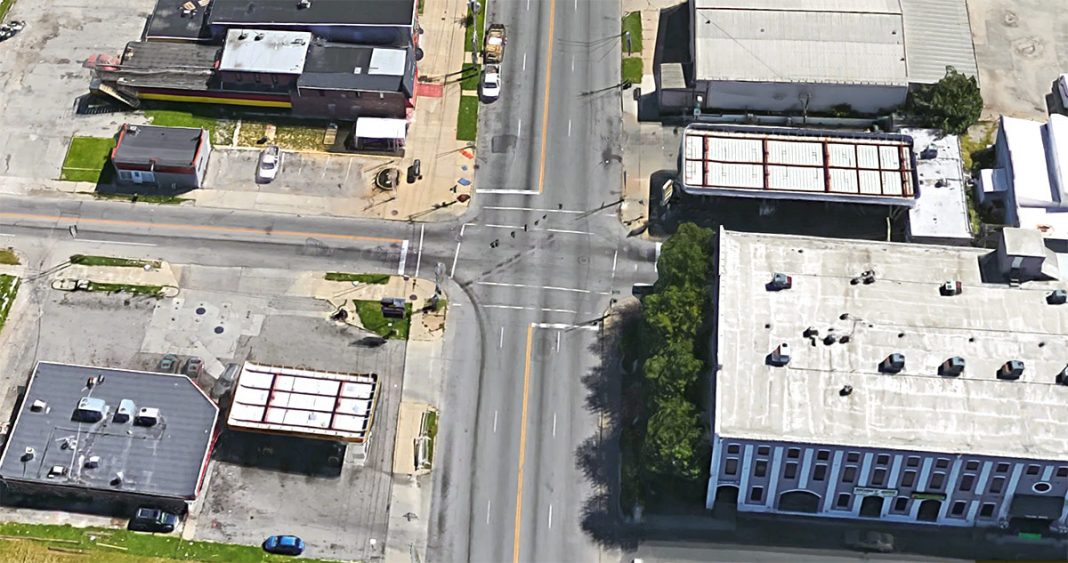 Tonight is the first of two meetings to discuss proposed changes to the configuration of West Broadway between 22nd Street and Louis Coleman, Jr. Drive. Metro Louisville Public Works is prepared to restripe the stretch following a repaving and has put forward a design that would add a center turning lane while eliminating a parallel parking lane.

Now Chris Glasser, executive director of the nonprofit Bicycling for Louisville, has put offered an an alternative design that could recreate West Broadway as a multi-modal street in the image of a complete street proposed under the Move Louisville plan.

The concept also calls for adding a center turning lane—two feet wider than the Metro plan. But instead of eliminating the parking lane, proposes a similar road diet treatment as was implemented on West Market Street and Grinstead Drive, where traffic counts are similar.

Glasser explained B4L’s proposal to Councilwoman Cheri Bryant Hamilton (D-5) and Public Works’ Dirk Gowin and Jeff Brown in a letter over the weekend. We caught up with Glasser to ask him about the details of B4L’s design.

“In terms of pedestrian safety, it’s important to keep on-street parking on both sides of the street,” Glasser told Broken Sidewalk in an email. “A row of parked cars is a protective layer for people on foot, and it has the effect of traffic calming.”

Glasser suggested looking at Bardstown Road as an example of how parked cars calm traffic. “If you want to see the difference in how a road feels with and without protective on-street, walk along Bardstown Road during rush hour and then after rush hour,” he said. “At 5:30p.m.—when all lanes are driving lanes—there will be a car driving 40 mph five feet from you. At 6:30p.m.—when on-street parking is allowed—cars will be going slower, probably closer to 30 mph, and you’ll have a protective 2-ton car between you.”

“And If we want the road to be bike-friendly, which is a stated goal of the project, we have to have bike lanes be part of the road redesign,” he added. “It’s a must. A road with 10-15,000 cars per day won’t be safe for people on bikes without a dedicated facility.”

Gowin responded to the plan on Facebook, saying that any turn lane is a safety improvement and noting that the city planned to study such a concept in the longer term. “Metro is exploring a study of Broadway in its entirety as a premium transit corridor as recommended in Move [Louisville],” he wrote.

Among the Move Louisville plan’s priority projects is an ambitious Bus Rapid Transit route along Broadway that would require additional study, but in the meantime, we say make West Broadway multimodal with just a little paint.

For comparison, here’s the Metro Louisville plan one more time.

If you’d like to support B4L’s multi-modal plan for West Broadway, attend one of two public meetings scheduled for the project. The first one’s tonight.

You can also contact Dirk Gowin, Louisville Metro Public Works, at 502-574-5925 or Dirk.Gowin@louisvilleky.gov.