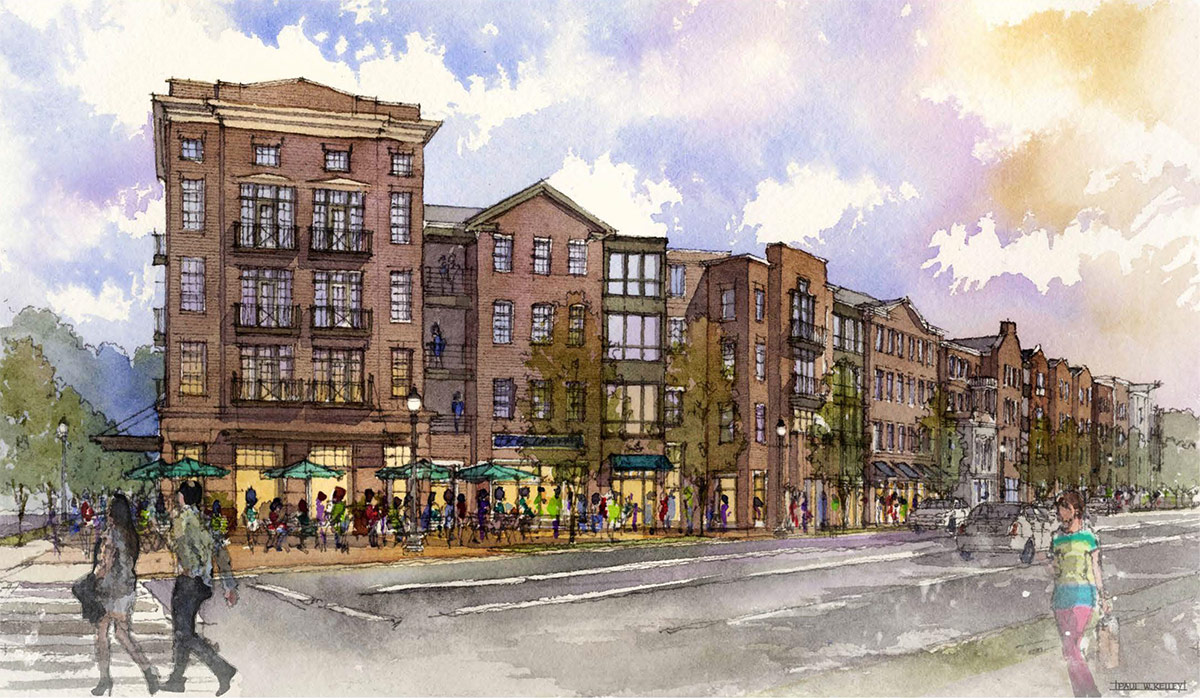 A large mixed-use apartment project is one step closer to construction with this week’s design approval from the Bardstown Road/Baxter Avenue Overlay Committee.

The $52 million project by Columbus, Ohio–based Edwards Companies calls for 280 apartments over 30,000 square feet of retail on the acute triangular corner of Baxter Avenue and East Broadway known as the Phoenix Hill Tavern site.

According to the Courier-Journal‘s Sheldon Shafer, that could mean up to 12 commercial tenants on the Baxter Avenue side of the building. Shafer added that rents in the complex could range from $800 to $1,700 a month.

The project drew early criticism for plans to demolish several houses and two commercial buildings on the site, but as I wrote here on Broken Sidewalk, the benefits of this project far outweigh its negatives.

Still, the committee had some reservations about the Baxter Apartments project, according to Samantha Chatman’s report at WDRB. Those included its overall height of four stories.

“Our concerns are making sure the scale of the overall overlay is respected,” Committee chairman John Warmack told Chatman. “We’re trying to maintain a character and a sense of scale and comfort along the corner.”

The overlay guidelines generally limit new construction on the corridor to three stories, but remains flexible. “New structures greater than three stories high may be permissible if taller portions are set back from the street frontage so that overall sight lines are compatible,” the guidelines read, “and if the increased height is not intrusive towards adjacent structures.”

Given the project’s location at a prominent intersection and across the street from two cemeteries, this is one of the best locations in the entire corridor for such density. We’d say this is a clear case of a situation where flexibility is in order. The developer’s attorney, Bill Bardenwerper, also said the project requires four floors to make it financially viable.

The Baxter Apartments project still has a long way to go before full approval. With the design approval in hand, the the developer must now coordinate design details such as signage with Metro Planning & Design, according to Shafer. In the next couple weeks, the overlay committee will again debate the project as it moves toward full approval, according to Chatman. Shafer added that the site must also be rezoned, requiring approvals from the Board of Zoning Adjustments and then the full Metro Council.

A block west on Broadway, Edwards Companies is also developing the former Mercy Academy site into nearly 200 apartments. That project has already been approved, but, according to Chatman, Bardenwerper said the two developments’ viability is closely tied together.

“We’d like to see this one across the goal line before we make a total commitment to that one,” he told Chatman, upping the stakes of the overlay committee’s decision. That line could just be a scare tactic, as Shafer reported that Edwards Companies’ Vice President Jeff Wood said construction on the Mercy Apartments could begin this spring, well before final approval for the Baxter Apartments comes through.