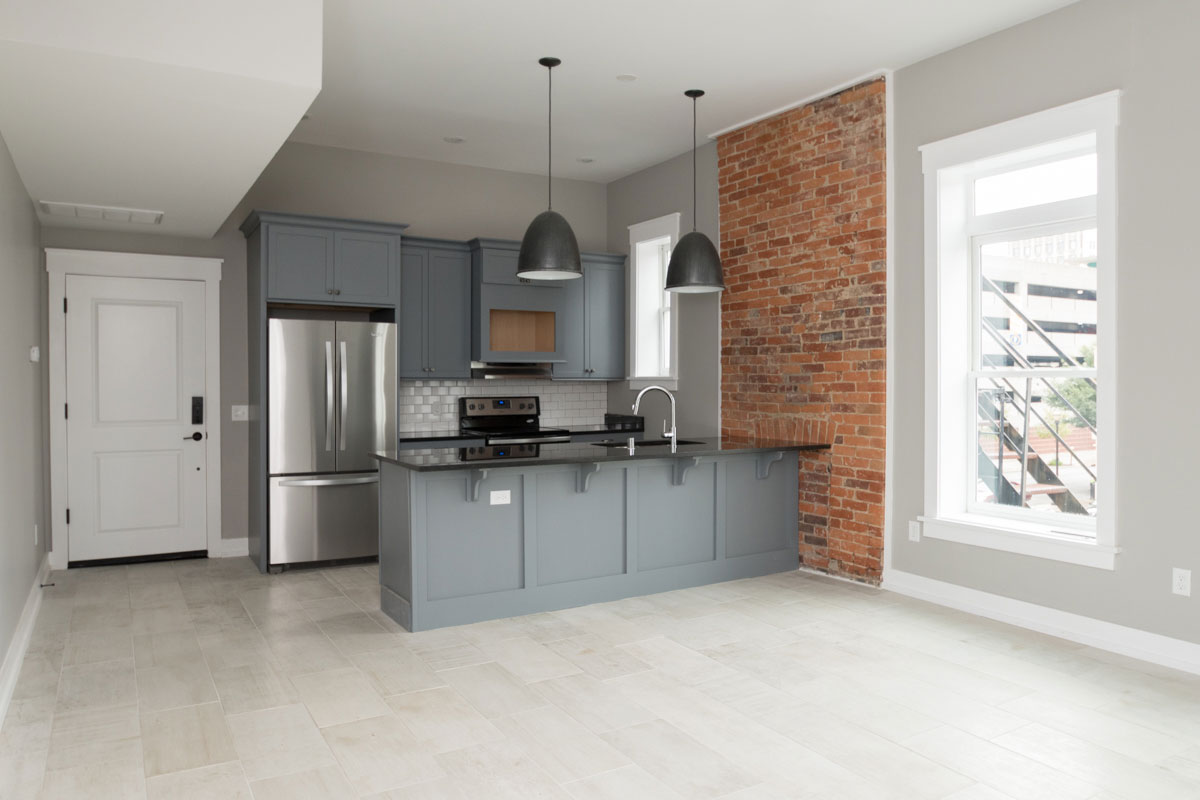 Back in the summer of 2012, a trio led by Griffin Meredith purchased a ragged row building at 514 South Fifth Street and planned a complete overhaul. By the end of this month, that project should be complete, with a retail tenant signed on Wednesday.

“It all went relatively smoothly,” Griffin Meredith told Broken Sidewalk. “It took time because we did it ourselves. For the most part, we ended up doing exactly what we set out to do.” Work included abating lead paint and asbestos in the 7,000-square-foot structure, tuck-pointing the entire building, and installing a new electrical system. “”We took our time and tried not to get stressed out,” Meredith added.

Filling the full block between Fifth Street and Armory Place, the development includes a ground floor office space and retail space with three apartments, already leased, above. A law office took the office space at Armory and a high-end barber is now under construction along Fifth. Beards & Bears is the creation of long-time hair cutters Lindsay Doogs and Melissa Gray. Doogs told Broken Sidewalk that the concept combines “quality haircuts for men” with craft beer. She has been a barber for 12 years, most recently at Market Street Barbers in Nulu.

“One day after work, I had a great day cutting hair, and I had an ‘aha moment’ with the name,” Doogs said. Beards & Beers combines the duo’s hair-cutting skills with craft beer for a growing population in Downtown. The shop accepts appointments and walkins.

While you’re getting a haircut or if you get there early and have to wait, Doogs said patrons will be able to sip bottled craft beers at a window bar looking out onto Fifth. “If they would like a craft beer while the services are being done, we’ll give them a craft beer bottle,” Doogs said.

“In addition to keeping their products local to support Louisville’s economy, the team at Beards & Beers has partnered with local craft breweries to provide you with a unique and redefined barbershop experience,” Doogs and Gray wrote of the business.

With a lease signed this Wednesday, construction is in full swing for a March 31 grand opening. Lindsay’s husband, Chad Doogs, is a contractor and will build out the space. She said he previously worked on the Hub and Copper & Kings.

Doogs said the aesthetic would be “industrial but warm at same time,” and fitting with the overall concept of a “barbershop steeped in tradition for the modern man.” Walls will show off exposed brick, a window-bar faces Fifth Street, and benches and a reception desk will fill the front of the space.

An opening night reception is scheduled to introduce neighbors to the concept. Beards & Beers just launched its Facebook page and a full website is expected soon.

Above, three apartments fill two upper floors. Those include two, two-bedroom units and one, single-bedroom unit. Rents for those units range from $1,400–$1,900 per month.

Meredith and his team worked with Lexington Architect Jack Stewart of Stewart Architecture on the project along with RKO Architects following a $50,000 facade loan from Metro Louisville’s facade design program. A new storefront was added and two balconies installed for the above residential units.

Griffin Meredith lives just down the street at 550 South 5th Street where he’s working on a solo project to convert another street-level space into 2,700 square feet of retail. “We want Downtown to be a place that people want to be, and not just from nine to five,” Meredith told us in 2012. This project should help move the needle on that goal.