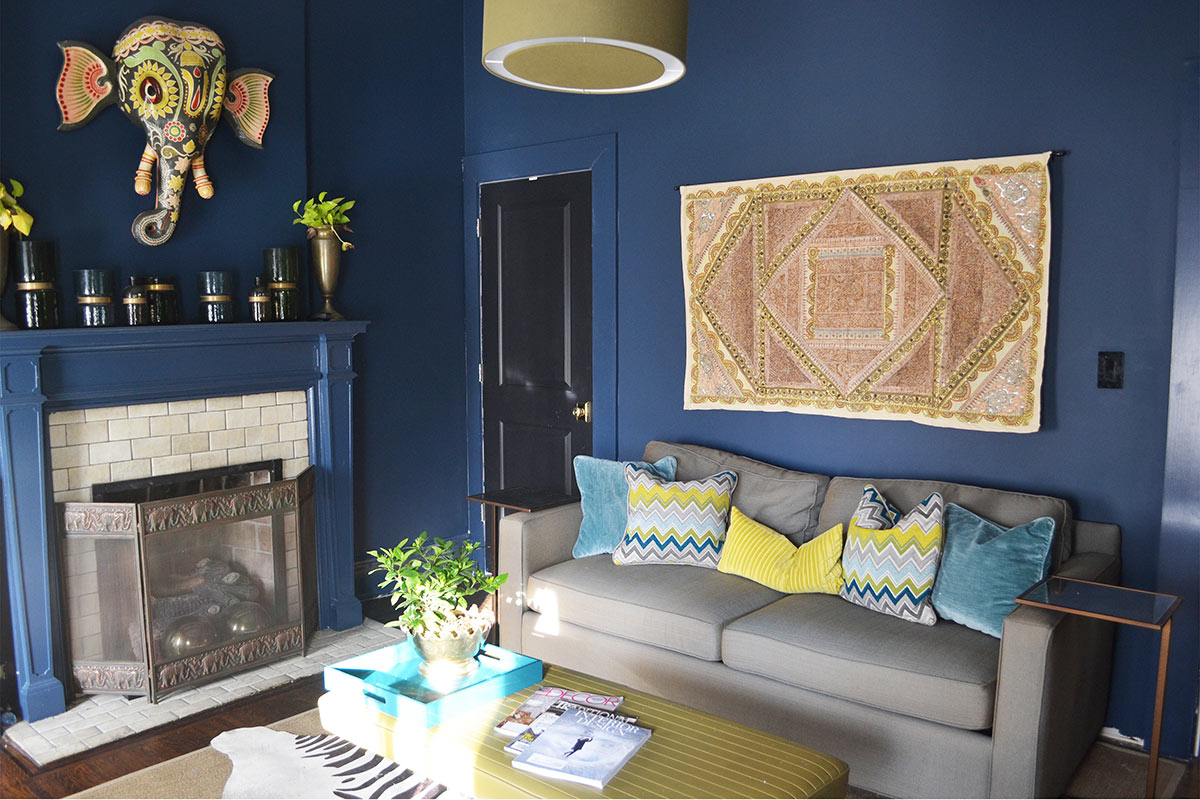 Leading up to the Home Tour, we’ll be highlighting each of the architects and their houses in exclusive interviews. Designer Bethany Adams thoroughly updated her 1870s brick Italianate home in Old Louisville with a new layout, a modern mix of color and texture, and a strong sense of detail. Before the near-gut renovation, the 2,000-square-foot home, the Adams Residence, 1211 South Sixth Street (map), had been a rental and was in poor condition. Adams quipped that while “a designer’s home is never finished… it’s safe to say the renovation was complete in April of 2016.” Broken Sidewalk: Why should I come tour the Adams House?
Bethany Adams: This house is unique on the tour in that I’m both the Interior Designer and homeowner. While I always design projects with the homeowners’ particular taste in mind, you’ll get a really good sense of my own personal style and abilities. Potential clients sometimes confuse being an Interior Designer with being an Interior Decorator (understandably so, as decoration is one of the services I offer and many well-intentioned decorators refer to themselves as Interior Designers). In this house, though, you’ll see how I put my education, training, and certification in Interior Design to good use by modifying the floor plan, adding windows and exterior doors, renovating the kitchen and bathrooms, as well as how I decorated it once the dust had settled.

As an Interior Designer, I always try to imagine not just how a home will look at the end, but how it will feel to the homeowner to actually be in the space on a daily basis. There are a million details that take a home from just looking good on paper, to feeling good to be in, and you’ll be able to experience some of those details for yourself when you visit.

Also, you should come because it’s so close to the After Party!

What is the heart of this home?
The heart of the home is definitely the kitchen. One of the changes to the floor plan included adding an additional opening into the kitchen from the living room. I also removed banks of closets from the kitchen and an adjacent mud-room, adding windows in their place, and replaced the fiberglass back door with a salvaged wooden French door. This opened up enough space to create a small dining room, which is perfect for our family of three.

Now in the morning the light streams through the French doors in the dining Room, into the kitchen, and all the way into the living room, making the house feel bright and cheerful and also giving the individual spaces a wonderful sense of connectivity to each other.

What was your strategy for outdoor space or landscape?
A few months into the renovation, my husband decided to track down the owners of the small, seemingly abandoned and dilapidated cottage next door and try to buy it from them. It turns out they were happy to sell and so we purchased it with an eye to expanding our very small outdoor space and moving my design studio next door. Both our house and the cottage had been used as rentals for a very long time and were surrounded by chain link fence and tremendous overgrowth.

Our landscape architect Phil Bevins of Bevins & Co. Landscape Design removed it all then graded both properties to deal with a drainage issue, laid sod, prepped a patio area off the back of the house with gravel and mulched everything else to prevent weeds. Our neighbors who own River City Window Works have built us a beautiful wood fence.

We’re excited to plant some more trees and plants in the front and back this fall, but probably the most exciting thing is that in October the city has plans to plant trees in front of our house on the sidewalk, which will help the curb appeal of the home immensely.

Can you explain the historic aspects of the house?
The brick portion of this home was built in the early 1870s in the Italianate style. There is an addition off of the back that is hard to date, but I’d guess it was from somewhere between 1910 and 1930. There is another, smaller, addition beyond that that dates from, perhaps the 1990s as the building components are modern.

Compared to some of the homes you see in Old Louisville, the home is quite modest, but it is obvious through small touches like the mahogany inlay in the living room floor, that the original owners were proud of their house. Unfortunately, a series of renovations and additions by previous owners removed most of the original wood windows and moldings, but the floors were left and the fireplaces upstairs have their original tile and mantels.

On the one hand, I was disappointed by the lack of historic detail, but on the other hand it was a tremendous blank slate, which allowed me to really get creative in ways I might otherwise have avoided because I really am a preservationist at heart.

What is the physical context of this house?
This house is located on a stretch of Sixth Street just to the south of Oak Street. There is a large historic corner commercial building on the corner, but the rest of the neighborhood is late Victorian and Italianate.

We moved to Louisville almost two years ago from the Hyde Park neighborhood of Chicago, which in many ways is very similar to Old Louisville. My husband teaches at U of L and we like the idea of living where we work. Still, we were surprised when people we met after moving here cautioned us away from Old Louisville. It is one of the most beautiful neighborhoods I’ve ever lived in (and I’ve lived in Georgetown in Washington, DC, and Paris!), and all of our neighbors are wonderful.

I think perhaps some of the concern over Old Louisville is outdated (I understand the neighborhood has changed a lot in the last 5 to 10 years), and having lived in bigger cities our perspective just might be slightly different. We’re excited to see what’s going to happen on Oak Street over the next few years. The street we lived on in Chicago—53rd Street—was very similar to Oak when we moved there in 2004. By the time we left in 2014 it had a new Indie movie theater, a burgeoning restaurant scene recently written up in the New York Times, and a planned Whole Foods. So, we are optimistic!

Where do you see the your (residential) practice headed?
After working for years in Chicago for high-end residential design and architecture firms, I am excited to have just launched my own practice this year. So far, I’ve worked on a kitchen renovation in Old Louisville and consulted on a renovation in Germantown. I’ve also had a lot of fun with my website, which has some pretty, “shoppable” illustrations of my designs as well as info about me as a designer and a blog. I’m currently renovating my design studio, which is next door to my home, and I’m looking forward to finishing that project so that I can welcome my clients in a style that more closely reflects what I can offer as a designer.

What trends do you see homeowners leaning toward?
I’m definitely seeing a push towards a kind of modern bohemian look with lots fabulous textiles like Moroccan or Hmong wedding blankets and African Mud Cloth, patterned tile in kitchens and bathrooms, and finishes in aged brass or black.

If you visit my house, you’ll see that I love a good, classic subway tile, but I’m also dying to use these amazing Moroccan-patterned concrete tiles somewhere. That’s the fun thing about being a designer—even after you’ve completely redone your entire home, there’s always a new, fun project to work on!