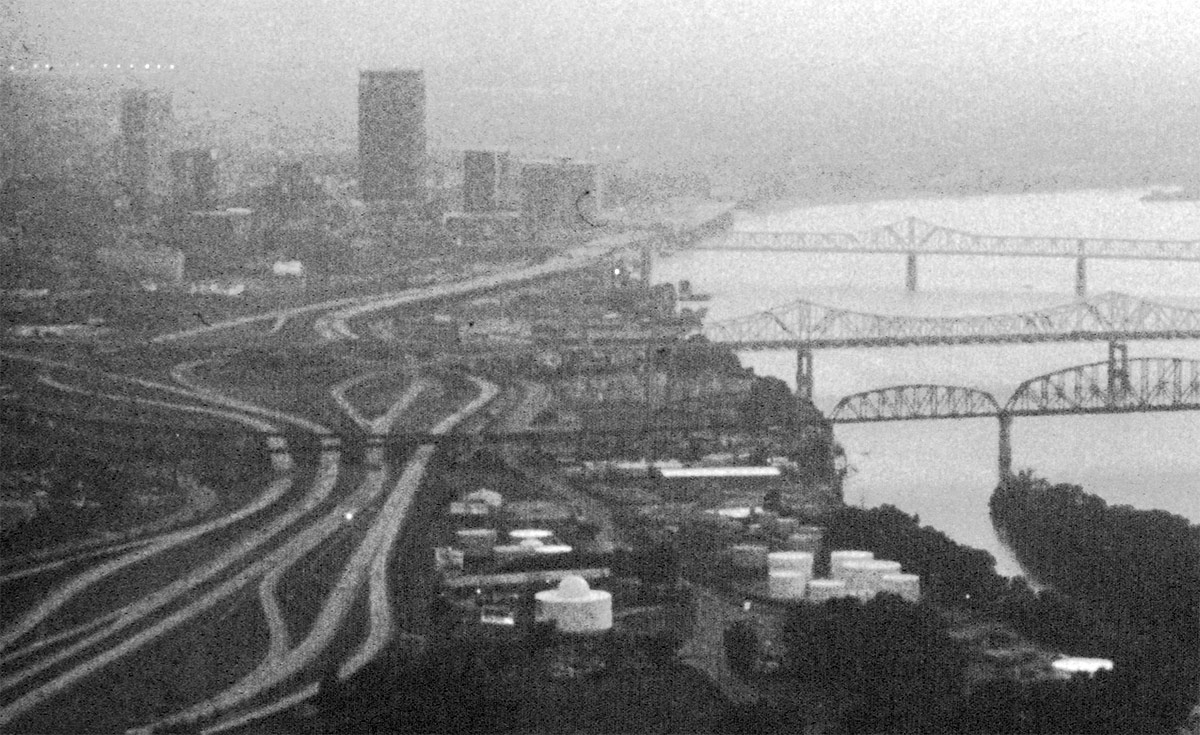 There’s no denying that the Big Four Bridge is among the best things to happen to Louisville (and Southern Indiana) in a decade. Walking across the pedestrian and cyclist span across the wide Ohio offers an experience of the river and the city unlike Louisvillians have ever seen before.

There’s no automobile traffic, except perhaps a subtle hum from highways in the distance, river breezes work their way through the intricate ironwork of the bridge, and time seems to slow down ever so slightly while traversing the span between Louisville’s Waterfront Park and Jeffersonville’s Big Four Station Park in the heart of the small town.

In some ways, Jeffersonville has had it better than Louisville so far. Business has flourished at the base of the bridge that drops pedestrians and cyclists a block from the town’s main drag. Development is starting to pick up as well, with plans for a new hotel and rowhouses fronting the park in the works.

On the Louisville side, we’ve got a dramatic elliptical ramp that offers its own unique perspective on the park and river, and certainly Waterfront Park is no slouch. But once you’re at the base of the bridge, you’re a bit isolated from the surrounding city. The enormous Spaghetti Junction cuts the park off from Butchertown and Nulu and Downtown is still just a skyline in the distance.

But what if we took a page from the history of the Big Four Bridge and connected it with Louisville’s burgeoning neighborhoods for a potentially bigger economic impact from the already successful project?

Back when the span carried railroad traffic, both freight and passenger rail, its old approach ramps extended south, forking with one side heading to a rail spur in Butchertown and another leading to the Big Four and Chesapeake & Ohio Freight Station, better known today as Slugger Field.

Above you can see the approach ramps winding through flood-inundated area in 1937. The ramps are also visible on historic maps here and here. Back in those days, the Big Four also had a pedestrian lane that likely followed along with those ramps.

According to the 1997 book, An Insider’s Guide to Louisville & Southern Indiana, by James Nold, Jr. and Bob Bahr, the approach ramps of the Big Four helped earn Spaghetti Junction its name. Because the highway interchange had to be built around the structural piers of the bridge ramps, narrow individual lanes were built rather than a single, wide expanse of concrete. These strands resembled spaghetti, and the rest is history.

The ramps were scrapped sometime in the ’70s, erasing evidence of the story.

So here’s the idea. What is we created a pedestrian and bicycle flyover that connects the Big Four Bridge, Waterfront Park, and eventually Jeffersonville with Downtown Louisville and Butchertown?

Now we’re not talking about removing the elliptical ramp—that one is great—we’re just thinking about adding another spur that connects with the city. The Big Four Bridge, in its current form, was designed with an oversized circular landing pad at the Waterfront Park end, where the elliptical ramp spirals off on a tangent at the edge of the circle. Let’s add one more ramp spiraling off, this time leading due south, across Spaghetti Junction, before splitting in two and sloping down to neighborhood streets.

The eastern side leading to Butchertown would slope down along Campbell Street, with a potential connection to the city grid at Campbell and Water Street. Another option is to continue the spur at grade as a shared-use path running through the woods alongside an existing rail line, wrapping around to connect with Franklin and Washington streets between Buchanan and Cabel streets near Copper & Kings. That path could also be extended to connect with the future extension of the Beargrass Creek Greenway.

The westward spur leading toward Downtown would require a little more ingenuity as it slopes down to grade beneath a new Ohio River Bridges Project flyover ramp paralleling Witherspoon Street. Once at grade, a shared-use path running on the north side of Witherspoon would connect with the city grid at Clay Street and Shelby Street. There, the path would join an existing shared-use path leading to Preston and Witherspoon streets at Slugger Field.

Why not just bike or walk along River Road at Waterfront Park as is an option today? That will, of course, still be an option under the above proposal, but there are a number of problems with River Road, namely that it’s design is dangerous for anyone not driving an automobile.

River Road was designed with very wide lanes that promote speeding, and because there are few controlled intersections along its route, motorists take full advantage of those wide lane conditions. From personal experience, it’s not uncommon for motorists to travel at speeds 45 miles per hour—or higher—despite a posted speed limit of 35 miles per hour (itself already too high for a street paralleling a major park). Those are deadly speeds that add unnecessary risk to commuting by bike or talking a walk through the park.

Other reasons for the bikeway in the sky concept is that River Road can flood, isolating the bridge and anyone who relies on it for a daily commute—and plenty do. Further, the elliptical ramp is approximately a quarter mile long before it lands in an area far from any city life. For human-powered transportation, reducing distance even slightly can have great benefits.

But the proposal also is an opportunity to show that Louisville takes cycling seriously. Many other cities around the United States and the world have bike flyover ramps that give cyclists the same benefits as motorists in terms of ease of mobility.

And on top of that, there’s an opportunity here to introduce some great design. I won’t begin to speculate what the approach ramps or their ensuing shared-use paths might look like, but Louisville could build an iconic piece of infrastructure that’s visible to the thousands of motorists stuck in traffic on Spaghetti Junction, reminding them of how easy it can be to bike rather than drive.

But perhaps the best argument for this proposal is its ability to knit together Louisville’s urban fabric and connect its neighborhoods in ways that can drive economic development. Jeffersonville’s urban approach ramps in the center of town show that it can work.

It’s worth a thought.

[Top image of the Big Four Bridge and Downtown Louisville in the ’70s courtesy the Environmental Protection Agency.]