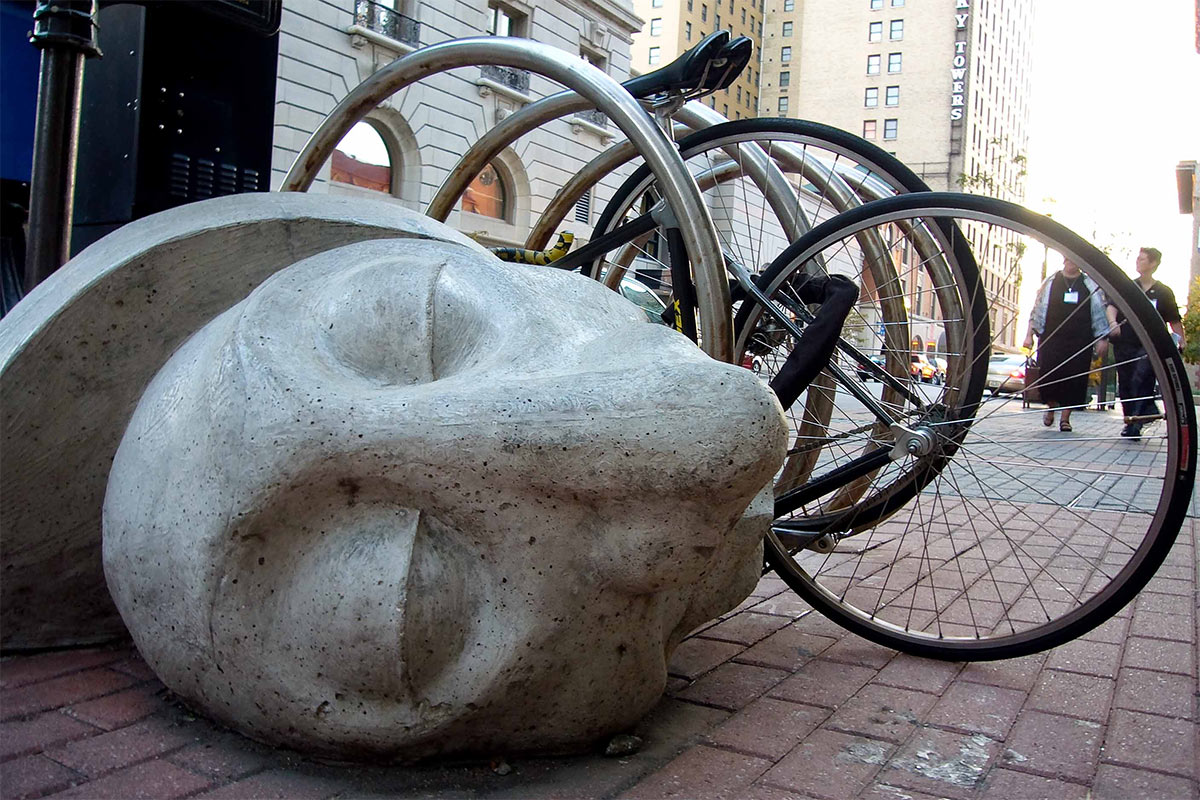 We’re entering the final stretch of National Bike Everywhere Month, and May’s signature event is upon us tomorrow, Friday, May 20: National Bike to Work Day. Are you pedaling in? Or at least pedaling in part way with one of the city’s three park-and-ride events launching from parks around town (details below)? Besides Bike to Work Day, there’s still a lot planned this month from the city’s Bike Louisville department and the nonprofit Bicycling for Louisville. Let’s check in with biking in Louisville going on all this month.

As we said, Friday’s Bike to Work Day is the city’s big event, and Mayor Greg Fischer and Councilman Bill Hollander, among others, have already pledged to ride. As usual, an annual celebration will again be held at 4th Street Live! from 11:30a.m. through 1:00p.m. Officials will be on hand to discuss bike commuting in Louisville and distribute the city’s newest bike maps, vendors will have booths set up in the street, and prizes will be given away. You can, of course, bike alone or with friends from anywhere in Louisville, but the city if offering four ride launches from local parks for those interested. Those are scheduled from Seneca Park, Shawnee Park, Iroquois Park, and from Jeffersonville, Indiana’s Big Four Station Park at the foot of the Big Four Bridge. Cyclists of all skill levels are invited to meet up and ride together in a larger group captained by experts from Bicycling for Louisville.

This is great for those who live way out in the county, those who’d like a little extra support from a biking community, or those who prefer a more social ride. Here are details on each ride (also don’t forget to register for a ride here for a chance to win a fully-loaded Giant Momentum commuting bike from Louisville’s Parkside Bikes).

All group rides will offer a ride back to the starting point from 4th Street Live! at 5:15p.m. Friday. A bike helmet is mandatory to participate in the city’s group rides (despite tenuous links to actually promoting real bike safety). But if you take your helmet into a Heine Bros. or Vint Coffee store on Friday, you will get a dollar off your purchase.

As an aside: While Louisville has made great strides in becoming a more bike friendly city, increasing its bike infrastructure and garnering praise from the League of American Cyclists, what’s it say that the Courier-Journal can’t properly spell pedal to work in its very pithy coverage of tomorrow’s Bike to Work event? “People who work in Louisville are encouraged to use peddle (sic) power for their commute on Bike to Work Day,” the paper’s un-bylined blurb reads to this day. There’s certainly a lot of room left for for improvement.

Besides Friday’s Bike to Work Day, B4L has a variety of additional events lined up as part of its Bike Everywhere Weekend.

On Saturday, May 21, the first specific event targeted around that group’s “Streets for People” initiative will partner with the Civic Data Alliance to conduct an on-street parking inventory of Downtown Louisville. “While downtown Louisville is flush with surface parking lots, it restricts many areas for on-street parking,” B4L wrote of the event, “which can be a great, simple tool for traffic calming that makes the street more walkable.” The data set will then be shared with the city.

If you’d like to participate, meet at the corner of Sixth Street and Jefferson Street in Jefferson Square Park at 10:00a.m. Please RSVP for the free event here.

On Sunday, May 22, B4L will host the second leg of its Spring Ride Series, the Beargrass Creek Trail Bike & Paddle. The popular event is free for B4L members or $25 (plus ticket fee) for others. Membership information can be found on their website. The ride launches from Rugby Field on the Scenic Loop in Cherokee Park at 12:00p.m. and the group will ride along the Middle Fork of Beargrass Creek before locking up and transferring into canoes with help from River City Paddlesports for a new perspective of the creek (no paddling experience is necessary). You can RSVP for the event here.

Later on Sunday, May 29, another B4L ride will explore the Neighborways of West Louisville. “West Louisville is a great place to bike,” B4L wrote of the event. “With flat terrain and gridded, numbered streets, it’s easy to get just about anywhere on low-speed, low-volume, low-stress streets. From Shively to Portland, downtown to Shawnee Park, there’s a whole network of streets in West Louisville that make biking a simple pleasure.” Chris Glasser, the group’s executive director, will lead the tour, launching at 10:00a.m. from Jefferson Square Park. RSVP here.

And finally, on Sunday, June 5, another tour titled “Historical Transportation Alternatives” will take a look back in time at transportation choices of the past, including “horses, trains, streetcars, trolleys and a variety of other modes prior to the heyday of the car in Louisville.” The bike would certainly fall into that category as well. The ride launches at 1:00p.m. at Louisville’s historic Union Station, 1000 West Broadway, that’s today the headquarters of TARC. RSVP here.