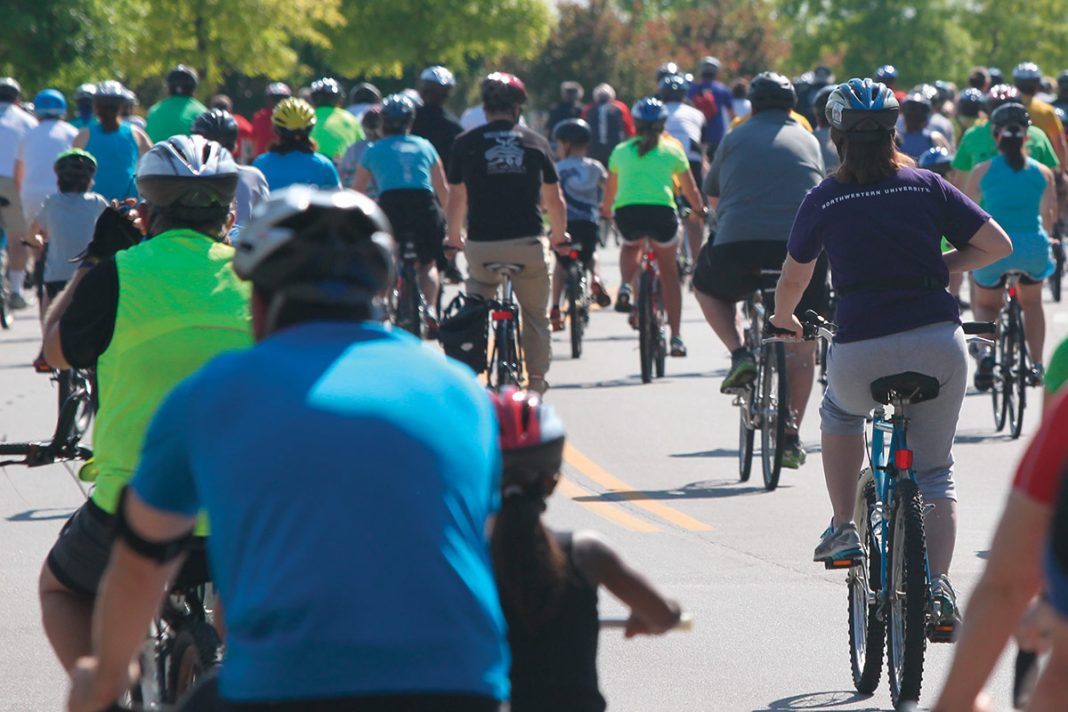 Bike Louisville is busy building the city’s bike network into a connected grid of bike lanes and neighborways that will help Louisville cyclists better navigate the city—or perhaps encourage a few more to take to two wheels. Just take a look at this Gif of the Louisville’s bike infrastructure expanding year by year.

And this year is something of a challenge to keep up with last year’s pace. After receiving its first official budget allotment—$300,000—back in 2013, a number that was renewed in the 2014 budget, Bike Louisville jumped up to $400,000 last year. It had hoped to grow again this year to $500,000, but Metro Council slashed the bike budget to just $350,000 for the next fiscal year. Still, Rolf Eisinger, pedestrian and bike coordinator at Bike Louisville, has a lot planned.

While its name has “bike” right there front and center, Bike Louisville actually covers pedestrians and cyclists in the city. As such, Eisinger said he tries to promote “more of a complete streets model” when approaching a street redesign. “We’re looking at it more in a wholistic point of view,” he said. “When we touch a street, it’s more than just bike improvements. It’s safety for pedestrians and motorists, too.”

Some of the changes that benefit more than just cyclists are pedestrian bumpouts or neckdowns that make crossing a street easier. Eisinger also noted that his agency has been adding plastic  delineator posts throughout the city to make safety improvements more visible. “Those are the small, low-hanging tools,” he said.

Keep an eye out for more bike infrastructure in the coming year. Eisinger said the city’s neighborways network of low-traffic, low-stress streets marked with sharrows will continue to grow. While some physical barriers associated with neighborways in other cities like traffic diverters aren’t on the table, Eisinger said he continues to push for adding new signage to help cyclists find their way. “Signage is on our short list as a priority,” he said. “And getting additional shared lane markings per the implementation plan, catching up with that.”

There will be additional new and revamped bike lanes as well. Eisinger said lanes on Seventh Street between Broadway and Chestnut Street will be redone to be more in line with what Sixth Street looks like. A bike lane on Goldsmith Lane from Bonair to Bardstown will also get an major redesign. “That bike lane is going to get overhauled,” Eisinger said. “We’re going to try to do a separated bike lane and add some delineator posts to show motorists where they should be driving.”

New bike lanes along 12th and 13th streets that got under construction in June are almost done. “We’re waiting to get some delineator posts in,” he said. Also coming up, Bike Louisville will be reworking a block of Fourth Street between River Road and Main Street. “We’re really trying to make those connections to the river better,” he said. “It really helps connect the network a little more. Not that long ago you couldn’t ride from one bike lane and turn onto another bike lane to get to your destination.”

There’s also a lot of maintenance planned on the bike network. “Immediately, we’re going to move a couple of the linear posts so they stop getting hit so frequently,” Eisinger said. That include moving posts at Third and Breckinridge streets to better accommodate TARC buses.

If you’re interested in staying up to date and adding your input to what gets built around Louisville, Eisinger recommended following along with the Louisville Metro Bicycle Master Plan (PDF). “The plan does a really good job of outlining the projects we’re hoping to implement,” he said. “I’m foreseeing there being an annual plan update. With that comes public involvement.” He said the next opportunity to update the plan will likely be this November or December, but said no details are ready.

Bike Louisville continues to follow a number of other longer term projects. One of those projects identified via public meetings is potentially installing bike infrastructure along Jefferson Street, he said. But he noted that with construction beginning on the Kentucky International Convention Center, any activity along Jefferson would be a couple years away. “We try to coordinate and work around other projects,” he said. “We’ll see where that lands.”

Eisinger said he will continue to push for an increased Bike Louisville budget in coming years. He said a lot of progress could be made educating members of Metro Council on the benefits of biking could go a long way. “I think highlighting the number of people who either can’t afford a car or choose not to get around by car in their districts so they hear both sides of the coin,” he said, noting that it often feels like they hear mostly from constituents who drive.

It’s about “changing the conversation so that it’s not bikes vs cars,” Eisinger said. “Roads are our public asset. How do we want them to function?”