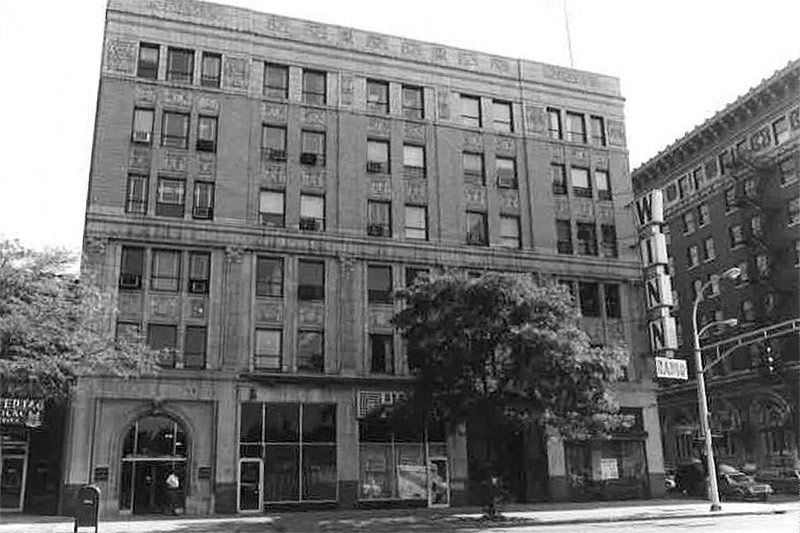 When local developer Frank G. Breslin first eyed the corner of Third Street and West Broadway in the early 20th century, he had visions of skyscrapers in his mind. What ended up on the corner is one of Downtown Louisville’s grandest buildings by today’s standards, but surely Breslin and his contemporaries wanted much more than the six-story structure today known as the Fincastle Building.

Back in Breslin’s day, the corner of Third and Broadway was one of the last remaining vestiges of a much older Louisville when Downtown’s streets were lined with elegant mansions and proud townhouses punctuated by larger corner commercial buildings. A 1926 photo, pictured, shows that the corner was occupied by a pair of townhouses facing Broadway with a three-story mixed-use building on the corner. All of these structures were built in Louisville’s now-rare vernacular architecture—the design of the city from the mid-19th century often when no architect was involved—and by the ’20s were showing their age in a rapidly modernizing era. An electric traffic signal suspended over the intersection was not yet active and a police officer can be seen directing traffic.

To Breslin, the corner would have looked downtrodden and shabby. Broadway was quickly becoming Louisville’s most modern street, with the completion of the YMCA Building (now St. Francis School) in 1913, the Weissinger-Gaulbert Apartments in 1912, the Brown Hotel in 1923, its adjacent Brown Theater in 1925, and the Heyburn Building in 1928. It’s pretty easy to see why the intersection of Fourth and Broadway was known locally as the Magic Corner. Louisville was booming.

Breslin, himself a general contractor, built his eponymous office building with help from Joseph & Joseph Architects in 1927 during Broadway’s heyday. The six-story structure was no slouch next to its taller neighbors in terms of design. The structure is clad with tan brick and terracotta with Renaissance-style bas reliefs, a specialty of Joseph & Joseph, according to the building’s National Register listing prepared by Marty Hedgepeth. (The listing was written in 1983, but the structure was not placed on the National Register until 2013 due to an objection by owners at the time.)

According to the National Register listing:

The lower floor is sheathed in terracotta with entrance in the western-most bay. The entrance consists of an arch with incised, classical motifs, the large keystone is adorned with an acanthus leaf. The arch is flanked by two columns with twisted rope-like shafts and stylized acanthus leaf capitals.

The second and third stories are also sheathed in terra cotta. The bays are articulated by fluted pilasters with stylized Ionic columns. The two end bays are more elaborate in treatment with rope-like columns. The wall surface is adorned with bas-relief motifs of shields and griffins. The end bays have three coupled windows on each floor and the central bay has paired windows. This pattern of fenestration continues on the fourth and fifth floors. The wall area of these floors is sheathed in buff brick. Terra cotta panels adorned with shields, ribbons, and torches articulate the windows of the two floors. Above the fifth floor windows are terra cotta panels with cartouche, ribbon, and cornucopia motifs. The sixth floor fenestration pattern repeats that of the lower floor and is sheathed in terra cotta. Between the bays are large terra cotta panels are Hermae-like figures (female form rather than that of Hermes). On the parapet is a central panel with a fleur-de-lis and rinceau decoration and two panels with wreaths and sways.

Two years later, though, and Breslin wanted more. In March 1929, he announced plans to top the structure with nine more stories, bringing the building to a total of 15 floors. The $675,000 addition, according to a Courier-Journal article at the time, would “be used by doctors and dentists and [the building] renamed the Medical Arts Building.” The structure’s original foundation was designed to handle the expansion years before (similar in fashion to how the now-demolished Commonwealth Building added a skyscraper to Fourth and Broadway.) Those plans were quickly dashed by the economic collapse and ensuing Great Depression of the 1930s, and today, we see only the original 1927 design.

A mystery remains about the design of the enlarged Breslin Building. According to a rendering published in Gary Falk’s 2009 book, Louisville Remembered, the taller tower would have reconfigured the block, which doesn’t appear to be the case based on news accounts in the ’20s. The rendering shows the building’s base as similar to how it appears today, but with three-story Ionic columns and a reconfigured number of bays and window arrangements. Perhaps this rendering predates the original building or was simply a marketing tool—or perhaps it’s flat out a different building. But nonetheless, we decided to see what the structure might look like had it simply been stretched up or reconfigured as the rendering shows. Take a look at the results.

Today, the Breslin Building is called the Fincastle Building and it’s in for another major change. Developers are busy converting the more-than-70,000-square-foot building at 305 West Broadway into 40 apartments. The project was posted to the website of the Louisville Downtown Partnership last December, but now the Courier-Journal‘s Sheldon Shafer sheds light on the conversion plans.

The Fincastle Building’s owner, Taurus Capital Management, and investor Amar Khadey plan to lease the first apartments in the building by the end of the year, according to Shafer. Khadey owns the Weissinger-Gaulbert building across Broadway. The project was brokered by Gant Hill. Taurus purchased the structure in 2006 for $4.3 million, Shafer noted, and has not asked for any public subsidy for the project.

Still, developers aren’t revealing many details until more work is complete. The one- and two-bedroom units don’t have a rental price yet, but Hill told Shafer the units will be market rate and geared toward students and young professionals. The ground floor will continue as retail use. No architect has yet been named for the project.