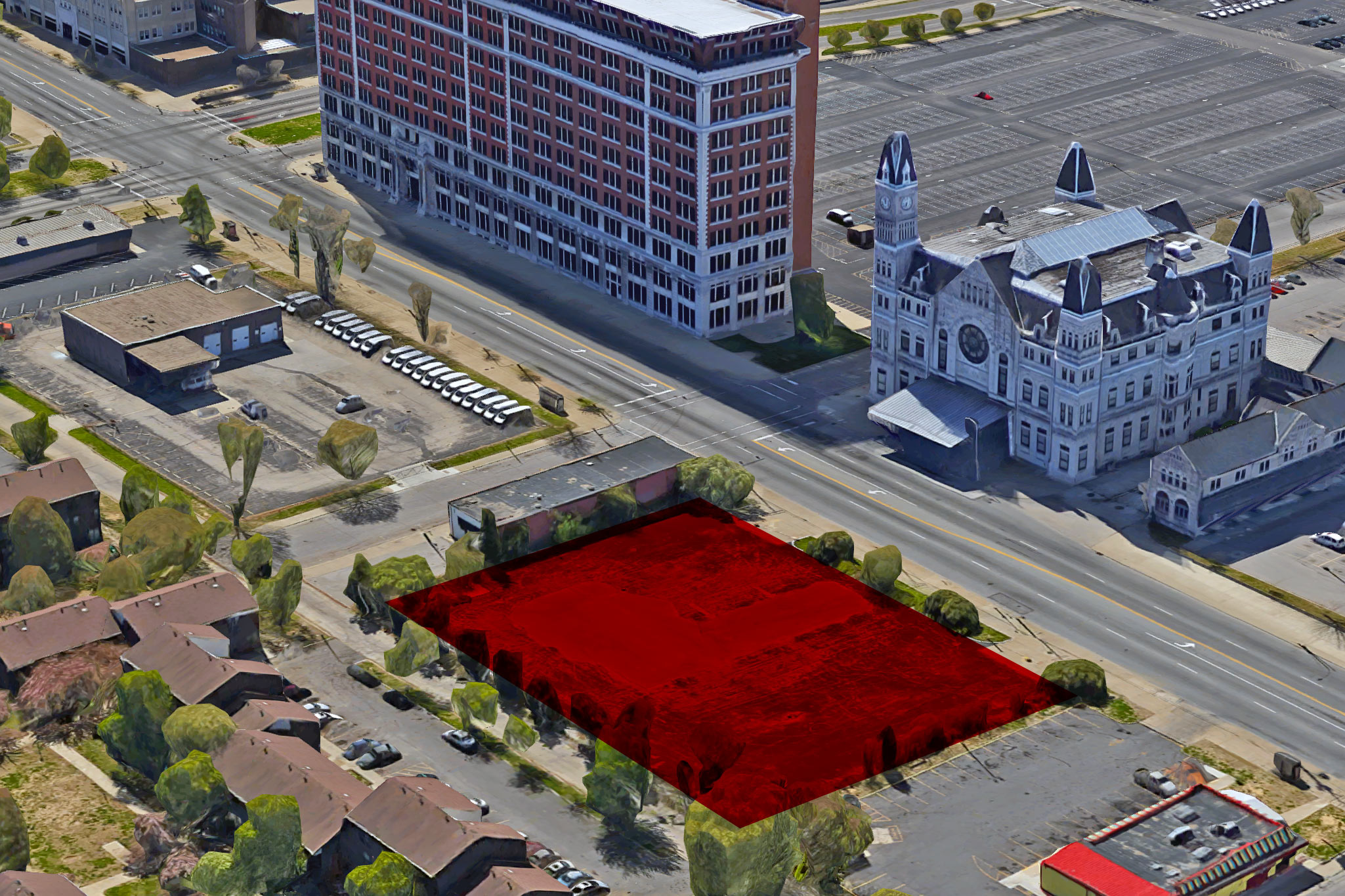 Right now, on Monday, May 2, the Board of Zoning Adjustments is deciding yet again whether Louisville’s Land Development Code is worth the paper it’s printed on. The commission tasked with granting waivers and variances to the land development code convened this morning, and one agenda item—a proposal for a suburban-style gas station at Tenth Street and Broadway across from the historic Union Station—threatens to continue to erode the urban fabric of the Broadway corridor.

The proposal by West Broadway–based Stry Lenkoff Company (the landowner) and far-East End Shalimar Investments would build a 3,733-square-foot gas station and store with a drive-thru restaurant. The gas station would be built on several parcels zoned C2 and listed under the Traditional Marketplace Corridor form district of Cornerstone 2020, the city’s land development code. But, of course, the project has nothing in common with the form district in which it is being built, making this project a little bit like a flashback to the shredding of the land development code in granting a Walmart Supercenter waivers and variances a few blocks to the west.

The Traditional Marketplace Corridor is a form found along a major roadway where the pattern of development is distinguished by a mixture of low to medium intensity uses such as neighborhood-serving shops, small specialty shops, restaurants, and services. These uses frequently have apartments or offices on the second story. Buildings generally have little or no setback, roughly uniform heights and a compatible building style. Buildings are oriented toward the street. Buildings typically have 2-4 stories. New development and redevelopment should respect the predominant rhythm, massing and spacing of existing buildings. In order to build the proposed gas station, the development team would need waivers and variances to wipe out pretty much every goal of the land development code. And the following six should about do that:

For the sake of time, let’s just discuss the variance calling for throwing out the maximum building setback of 15 feet from the street. The proposed structure would be set back 107 feet, 92 feet more than is allowed. And the developers give a doozie of a reason for the BOZA commission to grant the variance: Because gas stations are usually built that way.

“The variance requested allows the proposed gas/convenience/restaurant building to be located where convenience store buildings are universally located, behind the gas pump canopy,” an application from the development team reads. “The proposed development… sets the building where the traveling public expects a gas station to be.” As we discussed in the West End Walmart debate, the West Broadway corridor has certainly been eroded over the years to the point where it looks a lot like a suburban arterial. But the land development code and its form districts were put in place to try to correct the mistakes of the past. That a strip mall was permitted in the 1990s should not guarantee that Louisville in the 21st century is held to the same suburban standards simply because that context now exists. Otherwise, we’ll never have any positive change in this city.

The variance application goes on to state that there are no other gas stations in the vicinity—despite there being one .4 miles to the west and another .8 miles to the east—and then goes on to say that its own setback is less than the typical setback of older gas stations in the area. If we make Downtown Louisville a driver’s paradise with auto-centric gas stations and drive thrus everywhere—including across the street from our historic Union Station—then we’re going to get the Downtown we deserve, filled with lifeless expanses of asphalt and empty sidewalks.

The developer finally admits in the application, “Were the developer to follow the strict application of the code, the construction of a new building would not be allowed due to the universal site design principles for gasoline stations and drive-thru restaurants.” And perhaps that’s the point. Maybe we shouldn’t be building a gas station nor a drive thru at this location.

Louisville’s Cornerstone 2020 document took years of work and countless people to put together. Each part of the city was scrutinized carefully. Sometimes you just don’t want a gas station or a drive thru in certain parts of the city. This is one of those cases.

So how did the staff of Louisville’s Planning & Design Services respond the request? Did they summarily throw it out because it destroys the intent of the land development code, sets a bad development precedent in the area and especially in front of a city landmark, because it promotes auto-centric built form in Downtown Louisville?

Not quite. The staff report reads as a document that doesn’t really want to take a stand but generally opposes the plan.

“The requested variance will not cause a hazard or nuisance to the public since safe pedestrian access is provided from the public rights-of-way to the building entrance and since safe vehicular maneuvering has been provided,” the staff report reads.

Yet in another spot, it says, “The requested variance will alter the essential character of the general vicinity since the site is located in a Traditional Form District that requires non-residential structures to be constructed close to the street with parking to the side and rear. There are a few properties in the vicinity that were constructed prior to the adoption of the regulation. However, the variance could create a precedence that will allow for the continuance of developments providing parking between the building and street.”

It rightly points out, “The requested variance will allow an unreasonable circumvention of the zoning regulation since the proposed development can be built on the site while complying with the setback requirement. There are no physical site restrictions preventing compliance with the setback requirement… There are other gas stations along Broadway with retail which have the building close to the street and the parking and canopy to the side.”

“The strict application of the provisions of the regulation would not deprive the applicant of reasonable use of the land or create an unnecessary hardship on the applicant since the proposed development can be built on the site while complying with the setback requirement.

The report concludes that the proposal “does not support the request to grant the waivers to allow the parking in front of the building; or to allow the gas canopy between the building and the street.” The staff then goes on to say that BOZA must make up its own mind in granting the variances and waivers.

Once the Board of Zoning Adjustments makes up its mind on this case, we’ll update this story. Stay tuned.