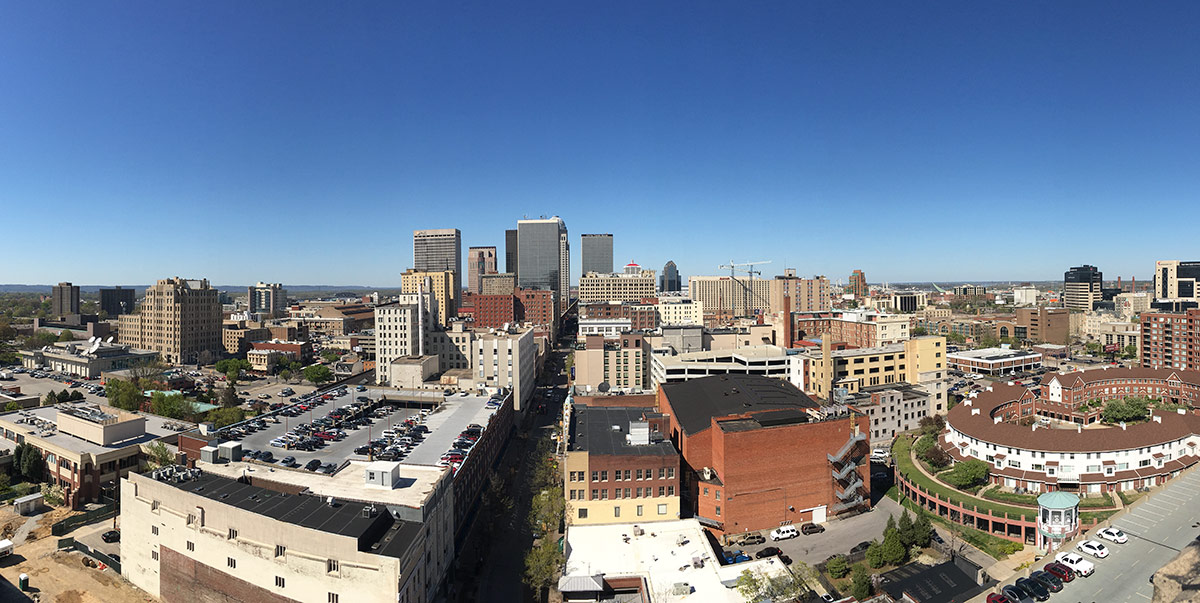 Sixteen floors above Fourth Street, a row of terracotta urns perched atop the Brown Hotel forms its own miniature skyline set against the skyscrapers of Downtown Louisville. These historic details mark the edge of what will soon be a new rooftop banquet space at the hotel.

On Wednesday afternoon, Brown Hotel Vice President and General Manager Brad Walker gave Broken Sidewalk a tour of the future overlook. “From our door here to the wall here to the raised area here is what we’re developing now,” Walker said, indicating a 4,000 expanse of rooftop that will open in July. Another section of roof will be developed later.

Joseph & Joseph Architects, located a few hundred feet up Fourth Street, are behind the roof deck design. The $750,000 project will add two-foot-square pavers floating above the existing roof on stilts. “We’ll clean these up, Walker said, motioning toward the terracotta balustrades and urns. “It’ll have a garden all around about three feet out from the wall.”

The final rooftop will begin to take shape in about four weeks. “We’re just kicking off construction,” Walker said. “We’re doing some steel supports down below. That’s going on now.”

Walker said there’s historical precedent for such an amenity. The Brown opened its first rooftop in 1928, five years after the hotel opened. Walker said the hotel cannot find any historical photos of the space, but an opening announcement dated May 28, 1928, detailed the menu. “You could get a dinner for $1.50 and cover was 50 cents on weeknights,” he said. “It closed down as best we can see in about ’71. That was the last shot at it. This space has sat here ever since ready for prime time.”

The new roof will house banquet events such as breakfasts, lunches, dinners, and weddings. Walker said guests had increasingly been asking for such a space and the timing seemed right. “You can never have enough meeting space at a hotel,” he said.

Besides space for guests, the Brown is reserving a small garden for its own use. “We’ll have a little herb garden for our chef,” Walker said. “We’ll grow our own mint. We already have the best mint juleps and now they’re about to get even better with a little mint garden in the area.”