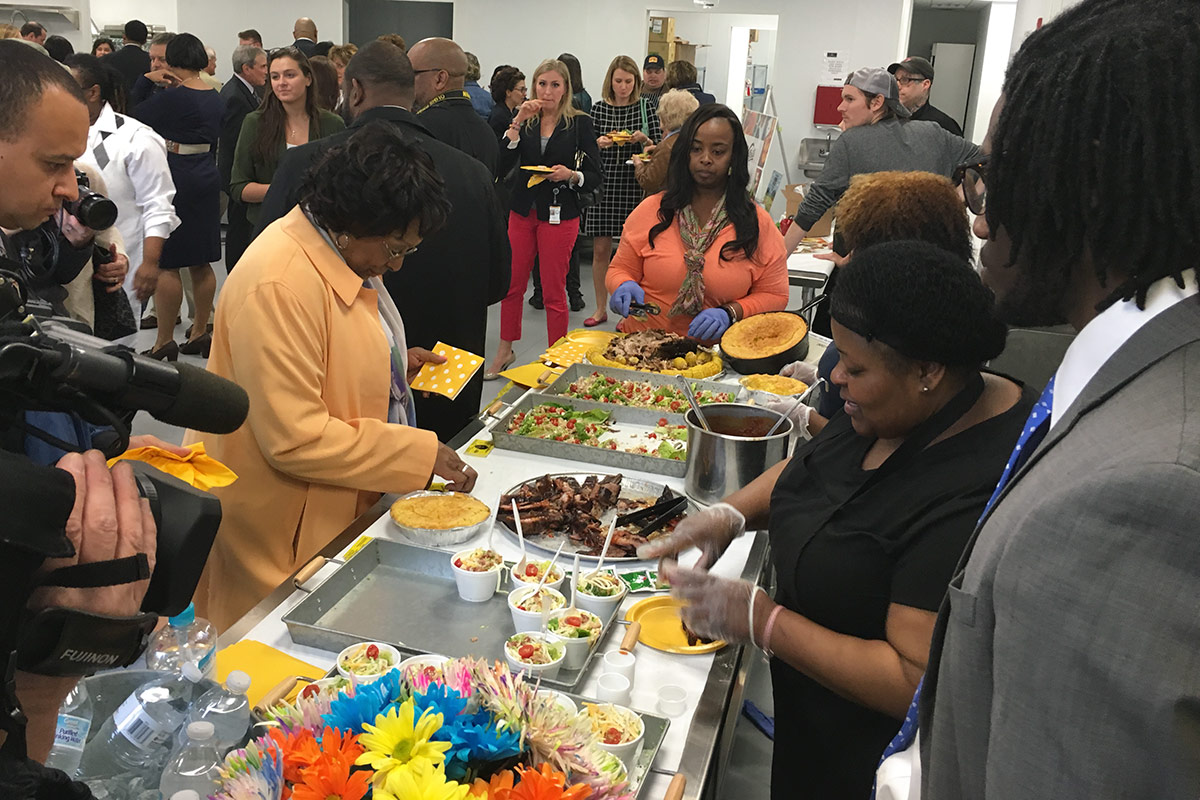 Jay’s Cafeteria was once a food hub for the Russell neighborhood, where sit-down restaurants remain a scarcity even today. But in less than a year, the structure that once housed Frank Foster’s popular restaurant has been transformed into kitchen incubator Chef Space that officials hope can generate a food renaissance in Russell and beyond.

“It’s really cool to see this place that was a center stone for the community that now is transformed into a place that’s going to create a hundred Frank Fosters or a hundred Jay’s or whatever the new concept is,” Mayor Greg Fischer said at an official ribbon cutting and open house today. As a nod to Jay’s, an old glowing chef sign is featured in Chef Space’s lobby.

But while the community gathered to officially celebrate Chef Space, food entrepreneurs have been hard at work within its kitchens since last November. And that’s no small feat considering ground was broken on the project in June 2015.

Chef Space was developed by Lexington-based Community Ventures and covers 13,356 square feet of space at 1812 West Muhammad Ali Boulevard where entrepreneurs can learn about the business of food while growing their own companies in a professional, fully-equipped kitchen environment. According to Chef Space, there are 135 kitchen incubators across the country, but this location is the first and only in Louisville. The space can accommodate up to 50 entrepreneurs.

“When you come into a neighborhood, you see two things,” Kevin Smith, CEO of Community Ventures, said at the open house today. “You see houses and you see businesses. There are a lot of vacant lots in this neighborhood, but there are a lot of good people. There weren’t very many businesses, and sometimes it’s hard to have a vital neighborhood when you are lacking homeowners and you’re lacking businesses. And that’s what this is the beginning of. In order to grow a community, you have to have entrepreneurs.”

His firm is also behind the Cedar Street Development a block north of Chef Space where 27 single-family homes on vacant lots. “This is going to allow us to begin to bring home ownership back into the area,” he said, adding that three of those homes are already under contract and are expected to break ground in May. “You will see more dirt turning and more buildings going up very soon.”

And Chef Space already appears to be spinning off new restaurants. “We have our first two entrepreneurs that are now beginning to look for space outside of here,” Smith said. “We want them to locate in the neighborhood. If we’re not able to find business space for them, we may have to build it.”

Fischer praised the support structure that such an incubator space creates for those growing their own businesses. “Sometimes it’s not all a bed of roses,” he said. “Sometimes you need someone behind you saying you can get through this, you can do this. That’s what an incubator like this does.”

“Ultimately, a project like this is not about a building—it’s about people,” Congressman John Yarmuth said at the event. “And there’s some incredible stories that are happening right now in this building.” He pointed to Emie Dunagan who had a cupcake tasting set up among the various businesses offering samples of their fare at the open house. Yarmuth said Dunagan has been learning about business at the incubator since November and has her products at local Heine Brothers stores—and she just turned 18 yesterday. “It’s the opportunity that’s found at Chef Space that brings these people together,” he said.