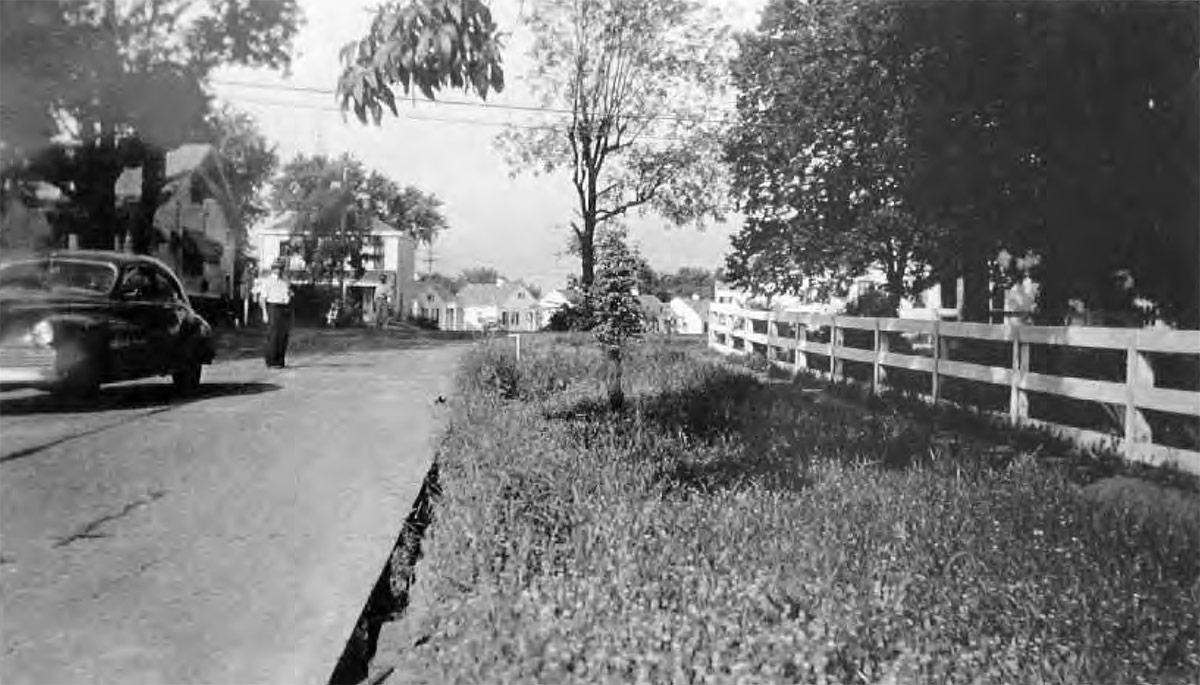 Chenoweth Lane, running from Brownsboro Road into the heart of St. Matthews, is an idyllic little lane. Lined by mature trees and quaint, well-kept cottages, it’s a reasonably calm, but busy, two-lane street. And, despite a fragmented set of sidewalks, it’s a walkable neighborhood, as evidenced by a healthy amount of pedestrian activity on any given day. There’s even a marked crosswalk near the northern terminus, for goodness’ sake!

The Kentucky Transportation Cabinet (KYTC) knows this one-mile stretch by its decidedly less-charming moniker, KY 1932. And, with an assist from the Kentuckiana Regional Planning & Development Agency’s (KIPDA) Horizon 2035 Plan, this residential and light commercial street is undergoing study to “improve safety, reduce congestion, and improve mode choice for non-motorists.”

On Wednesday, January 13, concerned neighbors held a public meeting at the St. Matthews Community Center to discuss those proposed changes to the corridor, and representatives from KYTC didn’t show up, despite an invitation.

Yet, while mode choice along the corridor is indeed limited, KYTC’s own collision data, traffic counts, and projections do not support a need for increased vehicle capacity or other car-centric modifications.

Appropriately, then, KYTC does present a “no build” option. And yet, the option of adding a third (center-turn) lane remains a prominent aspect of the study, accompanied by a variety of a la carte configurations of bike lanes, shared-use paths, and additional sidewalks.

But each of these configurations, either with or without the third lane, has a major drawback that many fear is apt to hinder as much as help pedestrian and cyclist safety and multi-modal transport. And is certain to diminish the charm of the corridor itself. Indeed, any improvement also provides an opportunity for KYTC to remove what it considers hazards (and others might consider traffic calmers): streetside fences, stonework, utilities, and mature trees.

The result is a far wider “clear zone,” creating a visually and physically widened corridor, which, in turn, promotes increased traffic speeds and decreased safety and livability for all other users and residents.

These implications are not lost on over 600 petition signatories and the grassroots effort called STOP the Widening of Chenoweth Lane, a group that has launched a strikingly effective defense on this particular front in the larger battle to preserve and/or reclaim a more people-centric version of Louisville’s streets.

During an evening meeting held at St. Matthews Community Center on January 13, approximately 50 citizens—with just a single “pro-progress” dissenter in the ranks—listened to a well-researched and well-reasoned presentation.

KYTC’s data showing decreasing traffic count projections, relatively few fender-benders, and an acceptable level of service (even at peak hours!) were employed to make a compelling case for scrapping a three-lane proposal.

The issue of peripheral improvements—completed sidewalks, bike lanes, shared-use paths, drainage upgrades, ADA-compliance, and other pedestrian amenities—also were addressed. Despite favoring several of these features, STOP has taken the position that any intervention by KYTC is unwelcome. Bike lanes are specifically opposed for Chenoweth, which did promote some discussion and disagreement.

Included in the discussions were State Representative Tom Riner (D-41), State Senator and Transportation Committee Co-Chair Ernie Harris (R-26), who fielded questions, and Councilman Bill Hollander (D-9), who made remarks following the initial presentation. In addition, mayors and representatives of several of the surrounding small cities, including Rolling Fields, Druid Hills, and others, were in attendance.

Interestingly, officials from larger surrounding cities—most notably, St. Matthews, but also Indian Hills—were neither present at the meeting, nor have taken a position. It’s been suggested that opposition from the latter may have contributed to the abrupt cancellation of the Brownsboro Road diet extension, based upon car commuters’ throughput concerns. As the Chenoweth Lane proposal addresses the same issue, one might be reasonably curious about their stance on the proposal.

The most notable absence at the January 13 meeting was the Kentucky Transportation Cabinet. Their office reportedly declined an invitation to attend. However, a follow-up call to Judi Hickerson, of KYTC District 5 which covers the Louisville area, confirmed that another KYTC-sponsored Public Input Meeting will be scheduled for late February 2016.

Subsequent to completion of the current Planning Study, a Final Study will be released in late summer 2016. Were an option other than “no build” chosen, the project would then enter Phase I design.

More information regarding the project, including contact information for governmental officials, may be found at STOP the Widening of Chenoweth Lane’s Facebook page, and at KYTC’s document  from its November 2015 informational meeting, here and here. You can also read up on previous Broken Sidewalk coverage of the project here and here.

Correction: A previous version of this article states incorrectly that representatives from Rolling Fields were not in attendance. The article has been updated.]