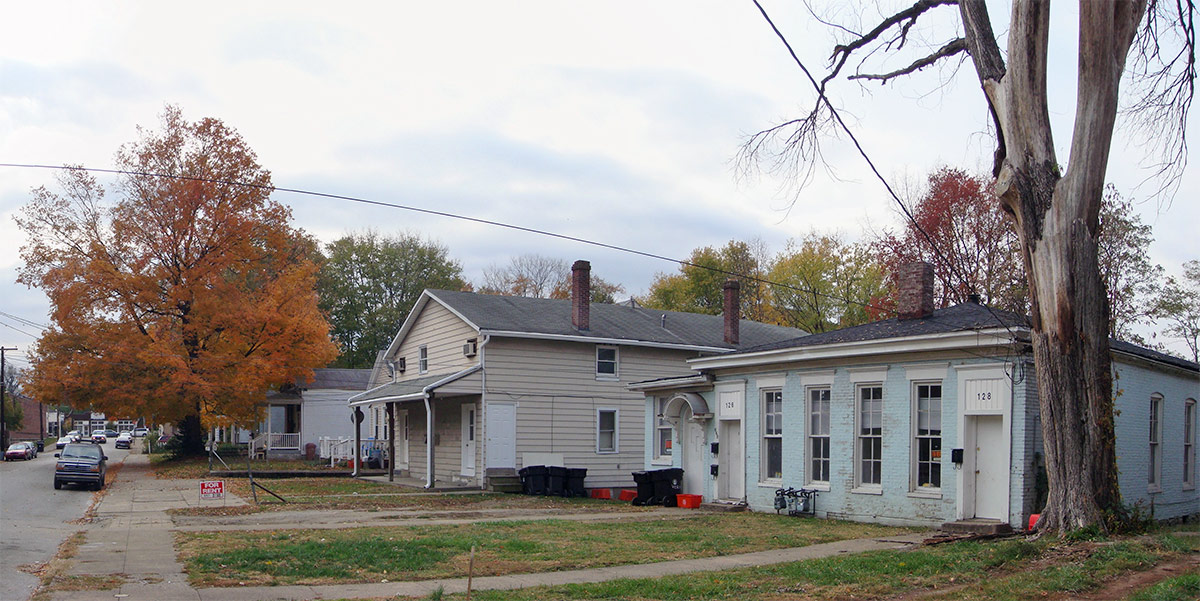 Here’s a stinker of a development proposal for the Clifton neighborhood.

Two 19th century duplexes on at 124–128 Vernon Avenue, long ago carved up into a total of seven apartments, would make way for the so-called 13-unit Conti Apartments. A brick single-story structure would be saved and its three apartments kept in place, but the other structure would be town down for a three-story, ten-unit building, set way off the street.

The project was proposed by Tami Conti, a real estate broker based off Dutchman’s Lane, under the umbrella of Brown Conti Company. Rebecca Brown is also listed as an organizer of the company and Bruce Kramer is listed as an officer, according to the Kentucky Secretary of State website.

Milestone Design Group drew up a site plan submitted to the city Monday. No building design details or elevations have been submitted.

An application to rezone the property claims the story-and-a-half wood structure proposed for demolition is in “severe disrepair,” necessitating its removal.

Given this is Clifton, it’s pretty difficult to argue a building is too deteriorated to be saved. Take the case of the Queen Anne–style wooden house on Frankfort Avenue that’s today the centerpiece of the Comfy Cow Ice Cream Parlor.

The new building at the Conti Apartments measures 70 feet by 60 feet, with 4,200 square feet per floor. Combined with the existing 2,200-square-foot structure, the entire project covers 14,821 square feet.

That 19-car parking lot paves over an otherwise remarkably intact streetscape along Vernon Avenue. A site plan submitted to the city shows the 45-foot-tall, three-story building pushed to the far back of the site, overlooking the backyards of houses on the next block over.

The application touts the plan’s compliance with the city’s minimum parking requirements—1.5 units per dwelling or 20 in this case (the maximum is 2.5 per dwelling, or 33 in this case). The plan calls for using one on-street parking space plus the parking lot for a total of 20 parking spots. (The fact that the city requires 1.5 spaces for a compact, walkable Traditional Neighborhood form district like this is another story.)

To handle all that extra impervious surface that would otherwise send stormwater rushing into the neighborhood’s sewers, contributing to the problematic combined sewer overflow issues, the Conti Apartments would build a stormwater retention basin next to its parking lot. Those retention basins are more commonly associated with big box development way out in the exurbs.

Meanwhile, because the new structure is built where all trees today exist on the site, the overall tree canopy cover will be reduced by 12 percent, according to the project’s site plan.

Today, large trees cover 27 percent of the site’s area, helping to reduce stormwater runoff and alleviating Louisville’s notorious urban heat island effect. Development plans indicate that the project would clear cut the site during construction and then plant new trees to meet the city’s minimum 15 percent coverage once the project is complete. That’s a reduction of about 3,500 square feet of tree canopy.

The Conti Apartments will face a number of regulatory hurdles, including rezoning the property (from R4 and R5-B to R7), seeking permission to demolish a structure in a Landmarks District, and to build with such a large setback.

A phone call to Tami Conti was not immediately returned, but this article could be updated if we hear back.

This is not how we should be building our city.