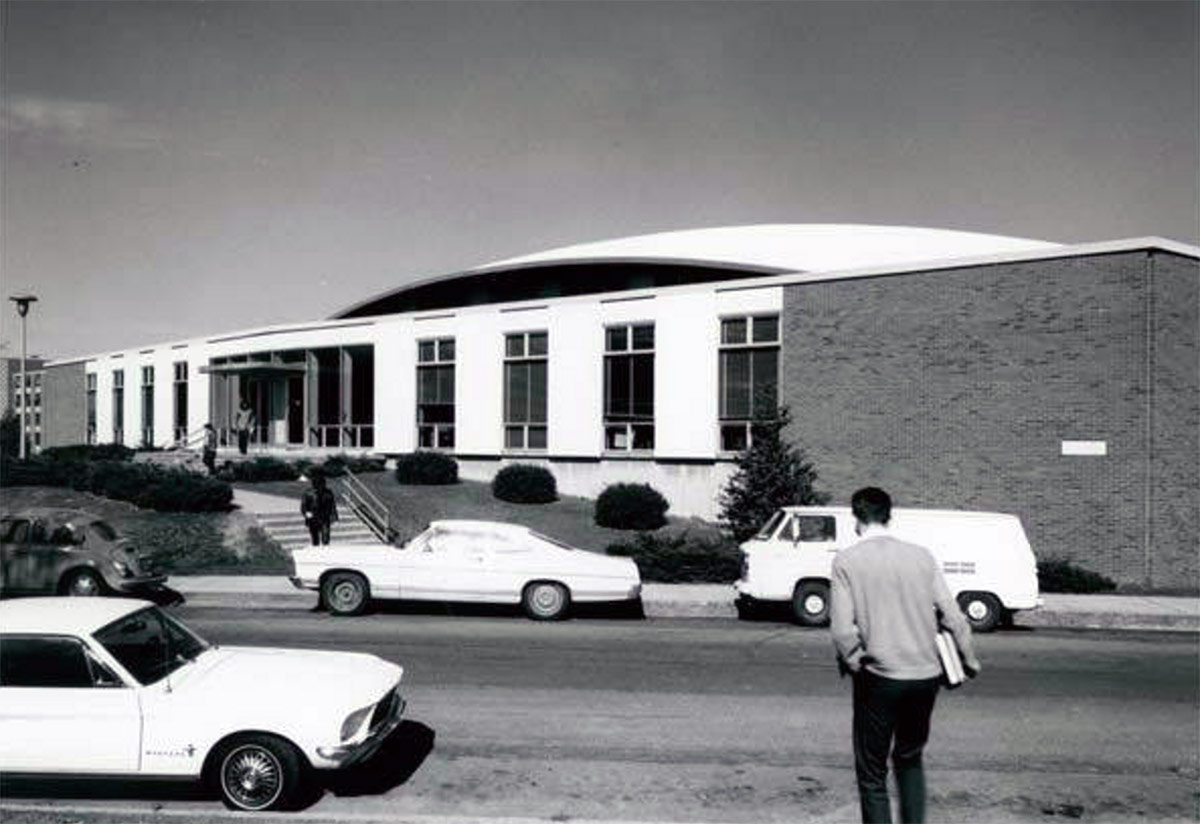 When Crawford Gymnasium opened on the University of Louisville’s Belknap campus in 1964, it was unlike any building in Louisville. “The unusual roof will be the first elliptical paraboloid in this part of the United States,” an October 20, 1963, Courier-Journal article noted. The paper called the roof a “saucer,” and there’s little doubt that to many the gym would have appeared to have just touched down from outer space in the post-Sputnik era.

“The form of the U. of L. gym is not just an experiment in shaping geometric designs in concrete,” the C-J article went on. “The shape has real practical advantages.” Among those are the elimination of any columns inside the structure. The roof rests on its four corners and its geometry gives it enough strength to stand with no additional support. The architects also claimed the shape “gives the greatest volume of usable space for the least expense.”

To build the roof, an elaborate wooden scaffolding was shaped into the elliptical paraboloid shape and two inches of fibrous insulation put in place. Four inches of concrete—some 180 tons—was then poured on top.

This type of structure is very rare in Louisville. A similar thin-shell roof, this time a hyperbolic paraboloid, can be seen on the Immanuel Church of Christ at 2300 Taylorsville Road. What’s particularly nice about these old hyperbolic buildings is their purity of form. There’s a singular idea governing the design of the entire structure.

The $1.1 million structure (or about $8.7 million in today’s dollars) was funded by $467,000 from the estate of Matthew H. Crawford his two sisters, according to the newspaper, giving the structure it’s official name of the John A. & Mary D. Crawford Memorial Gymnasium after their parents. Another $642,500 came from the City of Louisville.

Crawford Gym opened with two basketball courts, the state’s largest indoor swimming pool at the time, handball courts, weightlifting rooms, classrooms, offices, and a physical education library—but no air conditioning. The gym also had another structural trick up its sleeve: “Concrete folded plate in a sawtooth design was used for the ceiling” of the swimming pool, the newspaper noted. “This ceiling spans 97 feet.”

The gym was, among other things, the practice facility for the university’s basketball teams, including the 1980 team, which brought UL its first national championship.

Crawford Gym was designed by Louisville’s Hartstern, Louis & Henry Architects. By the time the gym was complete, that firm had split into two. Wehr Construction and O.S. Sendler Engineers also worked on the project.

Crawford Gym turned 52 years old this year, just three years shy of the 55 years required to be listed on the National Register of Historic Places. But now, the gym’s days are numbered as the university plans to raze the innovative thin-shell concrete structure next month.

A new academic building designed by Boston-based Goody Clancy and Louisville’s K. Norman Berry Architecture will take its place. The new structure, predominantly clad in brick and glass stands quite a bit taller than the gym, and will certainly define the grassy quad on which it sits more as an outdoor room.

The university will host a free open house at the gym from 10:00a.m. through 7:00p.m. on Thursday, August 4 for anyone wanting to take one last look at the facility.Former basketball coach Denny Crum and some former players will share their memories at an 11:00a.m. tribute.

Additionally, the university will be selling off pieces of the old gym, including 12-inch-by-12-inch sections of the gym floor for $50 and scoreboards, bleachers, goals, and other items via an auction. All proceeds go towards the Denny Crum Scholarship Fund.