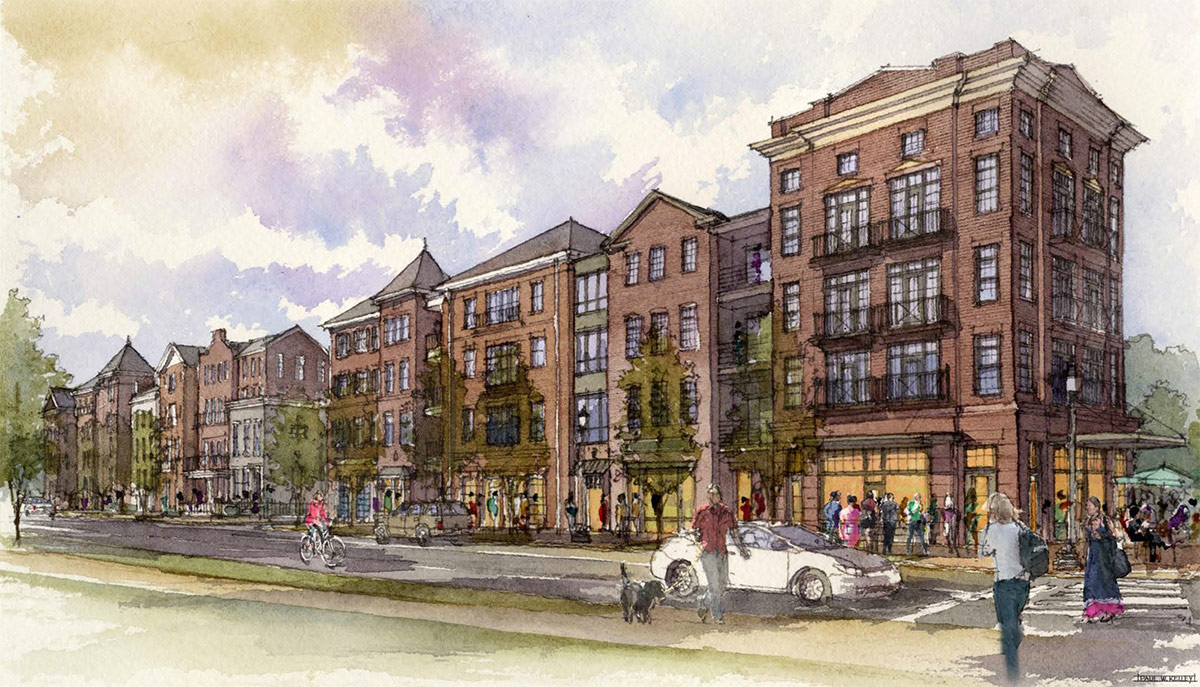 Developers behind two ambitious residential projects on East Broadway are threatening to shut down both developments if the city doesn’t hand over millions of dollars more in subsidies. Bill Bardenwerper, an attorney representing Columbus, Ohio–based Edwards Companies, suggested that the projects could be shuttered at a Metro Council zoning committee meeting.

On Wednesday, the Courier-Journal‘s Sheldon Shafer reported that Edwards Companies wants a total of $10.4 million in incentives from the city to build the Phoenix Hill Project, up from the $7.5 million the city has already pledged. Edwards Companies’s lawyer said both projects are linked and the developer will either build both or none.

This is not the first time Bardenwerper has made suggestions that the projects might not make it if the developer doesn’t get its way. In February, WDRB’s Samantha Chatman reported that Edwards Companies made similar statements at the Bardstown Road Overlay Committee to gain design approval for the Phoenix Hill Apartments.

“The Mercy one is more reliant on this one [Phoenix Hill] because that’s an all residential project,” Chatman quoted Bardenwerper as saying at the meeting. “So as that one has already been approved, we’d like to see this one across the goal line before we make a total commitment to that one.” The implication then was that if the overlay committee didn’t come through with an approval, then the unrelated project might not make it.

This time, the threat is more overt, saying they need the city to increase the existing $7.5 million in subsidies by another $3 million if the projects are to proceed.

“Bardenwerper said Edwards is ready to give up on persuading the Jefferson County Public Schools to approve $3.8 million in financial incentives for the two projects—a deal that would include payments by Edwards to the schools, in lieu of paying property taxes over the long term,” Shafer wrote. JCPS is apparently reluctant to agree to the terms as they have never undertaken such a deal.

Today, Insider Louisville’s Caitlin Bowling reported that Louisville Forward, the city’s economic development department, is standing its ground on incentives for the project, refusing to add to the $7.5 million already proposed.

Demolition of the historic and non-historic parts of the old Mercy campus is already complete. That site was to house 200 apartments. No work has started on the Phoenix Hill Apartments, where 281 more units and 33,000 square feet of retail are planned.

There’s no doubt these two projects would transform the East Broadway corridor and enliven Baxter Avenue. We have previously written highly of the Phoenix Hill Apartments concept as a good fit for the site. But how much pushing from developers will the city take? In a recent panel discussion of Edwards Company Vice President Jonathan Wood and three other out-of-town developers, all agreed that subsidies are necessary to get new urban apartments onto the market in Louisville. But how much is enough?

But on the opposite side of the coin, when everything being built in the urban areas of Louisville are subsidized with incentives like these, how can you say no to one developer and yes to another? Given the overwhelming subsidy at the Omni Louisville Hotel, $3 million seems like peanuts. Yet these two projects along Broadway will transform their section of town as much if not more than the Omni will around the convention center.

Should Edwards Companies abandon the projects the two projects, Louisville will be out another historic building. (Shafer reported that Edwards Companies had told area residents the Mercy site is worth more as a blank slate.) But that’s nothing new as developers have repeatedly demolished historic structures before financing has come through. According to Shafer, Councilman Tom Owen, cautioned against the city issuing demolition permits for several historic buildings on the Phoenix Hill Tavern site if the projects might lead nowhere.

For more, read these reports by the Courier-Journal and Insider Louisville.