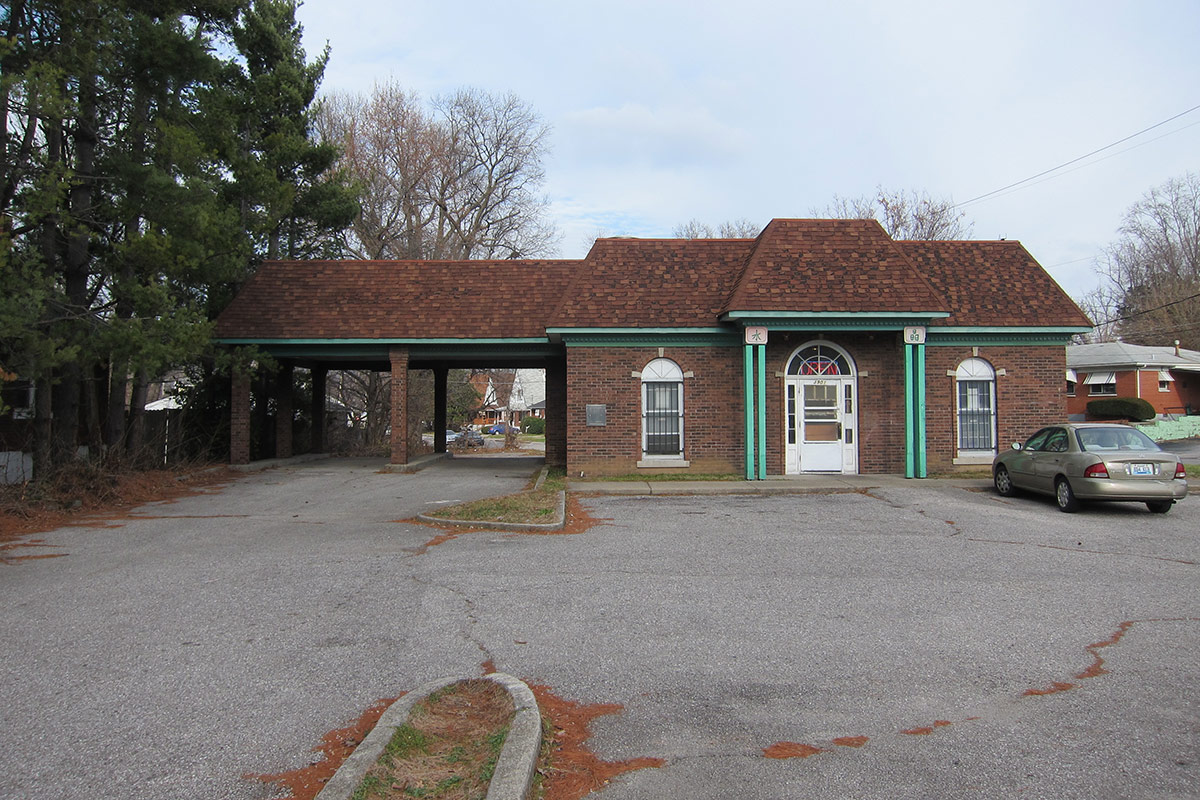 West Louisville is getting another Family Dollar, bringing the total number of stores for the North Carolina–based company to six in an area west of Ninth Street and north of Broadway.

Construction is about to begin on the store at 3901 West Market Street at the corner of 39th Street. The site was formerly home to a suburban-style bank-turned-fast-food-joint. The generic structure set far off the street with a drive through has a sign out front reading Crystal Chinese Restaurant. Two brick houses, one that had burned a couple years ago, will be demolished to build the store’s parking lot.

The building permit for the 8,320-square-foot store was issued last week (h/t Business First), and site plans filed with the city show a standard box facing a 29-space parking lot on a .9 acre lot. Vehicles can enter the site from Market Street or through a widened alley in the back.

With 29 parking spaces, that pushes the development well above the parking minimum of 17 spaces (71 percent over the minimum). Given the dense and walkable character of the surrounding Shawnee neighborhood, holding to that minimum would have likely sufficed. (Across the street, a large strip mall sits behind an excessively large parking lot as well.) Four bike parking spaces are also noted on the plan, meeting the minimum required by code. The result is a large parking lot surrounding the new building.

The project—both the building and parking lot—will cover about 70 percent of the .9-acre site with impervious paving, leaving 30 percent, or almost 11,600 square feet, of pervious space. That’s a net increase of about 6,300 square feet of land that can’t soak up rainwater over what’s there today.

That’s important because this stretch of West Market Street recently underwent a streetscape redesign that brings green infrastructure into the design with rain gardens meant to increase the pervious area of the street and divert rainwater runoff from an already burdened Combined Sewer system.

“We incorporated streetscape elements to differentiate between each character district and help create a sense of place,” Trey Rudolph, a landscape architect at GS&P, said in an interview posted on the firm’s website. “For instance, brick paving in the commercial areas is a uniquely different experience than the residential areas.”

Designers also looked to promote public safety with the street redesign. “We proposed narrowing some of the drive lanes to reduce traffic speeds and also included bump-outs, which are periodic landscape islands that bring the curb line closer to vehicular traffic to visually slow down drivers,” Rudolph said. “For instance, where there are two lanes of vehicular movement with parallel parking on either side of the street, we replaced one of the parking spaces with a bump-out to visually infringe upon the vehicle’s space.”

The new streetscape reflects the surrounding neighborhood’s designation as a Traditional Neighborhood Form District under Louisville’s land development code. The new Family Dollar meets the general rules of the form district by locating the new structure at the sidewalk, among other things.

“Traditional neighborhood districts are generally characterized by a range of residential densities and a variety of housing types, street patterns which include alley ways, on-street parking, occasional office uses on predominantly residential blocks, and proximity to parks and open spaces and to marketplace corridors or to the downtown,” Cornerstone 2020, the land development code, reads. “Proposed residential, office and neighborhood commercial developments in aging neighborhoods with distressed and vacant housing should be encouraged.”

As a neighborhood-serving commercial development, the Family Dollar can be seen as a boon to the area’s walkability. It’s a sort of corner store where neighbors can go to purchase household goods or students from the adjacent Shawnee High School can shop after class. It’s location at a commercial intersection helps cement 39th and Market streets as a neighborhood hub.

While no design documents were submitted to the city, based on other stores in the area, the structure will likely be a standard, cookie-cutter dollar store. Its box layout, no doubt optimized for efficiency and ease of construction, is forced onto the irregularly shaped parcel rather than building to the site lines, leaving an awkward triangular plot leftover on the corner. That’s fine, but the end result runs the risk of ignoring the corner with its parking-lot-side entrance on the west side of the building.

According to documents filed with the city, the new building will stand nearly 23-feet tall and pop up at its entrance to 26 feet. A concrete block wall covered in EIFS, a synthetic stucco, will screen the dumpster along 39th Street. Metro Louisville advised against that type of wall in its recommendation for a parking lot on First Street this month.

In the end, it looks like the Family Dollar is a good development for the Shawnee neighborhood. It replaces an abandoned suburban intrusion with a commercial anchor at the sidewalk level. While the store generally turns its back to the corner, an entrance is provided at the sidewalk. It will provide basic goods for the neighborhood.

Now if we could work on reducing the amount of parking in these kinds of new developments to ensure that their walkable neighborhoods remain—and increase—walkable.