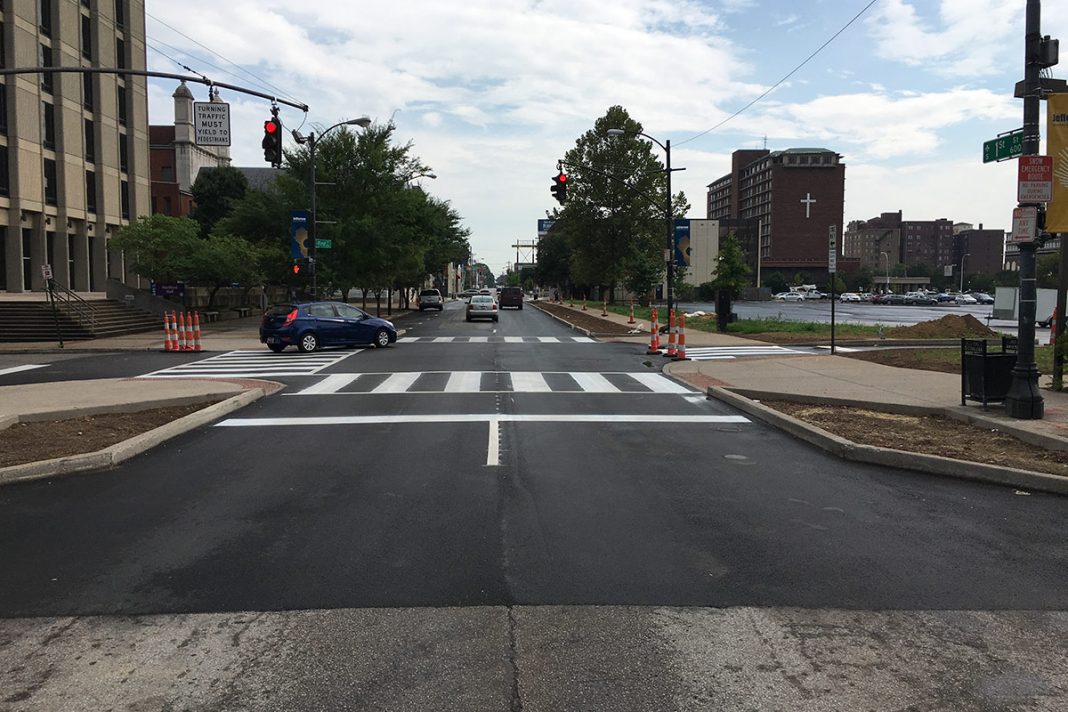 If you’re walking along First Street in Downtown, be sure to check out a new streetscape at First and Gray streets, currently awaiting its finishing touches from Jefferson Community & Technical College.

Like any good infrastructure project, the neckdowns at First and Gray accomplish several goals at once.

“They all kind of mesh together into one project,” Craig Turpin, Director of Facilities & Maintenance at JCTC, told Broken Sidewalk. “One of the issues we have had is a safety concern.urpin said the new streetscape makes it easier for pedestrians to cross the street by narrowing the road bed. The neckdown occupies space in the parking lane.

“I walked across it the other day,” Turpin said. “It takes about eight strides to cross—you’re really crossing two lanes instead of four.” High visibility crosswalks have been painted on the street, an improvement over the previous parallel lines. He said it’s too soon to tell if the neckdown will also calm automobile traffic along First, but will be watching how motorists react as classes start next week. “I hope it does [calm traffic],” he said. “We’re trying to make a safer environment for our students. A new cast stone and metal fence will buffer the parking lot, steering JCTC students the nearest crosswalk rather than walking directly from the parking lot and crossing mid block, Turpin said. The fence posts will take cues from the architecture of the Seminary Building at First and Broadway and resemble signage currently in place around campus. Turpin said he expects the fence to be installed around Labor Day.

On the sidewalk, new lighting will also soon be installed. Electric utilities are already “stubbed” in, Turpin said, but all the components haven’t arrived yet. He said the fixtures will resemble those installed along Second Street and within the JCTC campus.

Another major design feature of the new streetscape is a series of rain gardens that will capture water from the street. “The rain garden accomplishes several things,” Turpin said. “Hopefully it will help absorb water directly into the ground and reduce the water going into the storm sewer.” He also expects planned landscaping to improve the street’s aesthetics and, again, steer pedestrians to the improved crosswalk. New plans will be installed once the weather cools down, Turpin said. “We told them them to wait to give the plants a little better chance of surviving.”

The new streetscape was designed by Louisville’s Qk4 Engineering. JCTC also worked with Metro Louisville Public Works, which will be installing a new traffic signal at the intersection, the Kentucky Transportation Cabinet (KYTC), and the Metropolitan Sewer District (MSD) to get the project built. Turpin said the improvements came in a little under the $625,000 budget, which included design work. Funding came from JCTC and a transportation enhancement grant. The entire project is expected to be complete in early September.

“We’ve had the idea for a couple of years,” Turpin said. “For different reasons we weren’t able to get it bid out till this spring.” He said at some point, JCTC could consider making similar changes, perhaps at First and Chestnut streets, if additional funds become available.