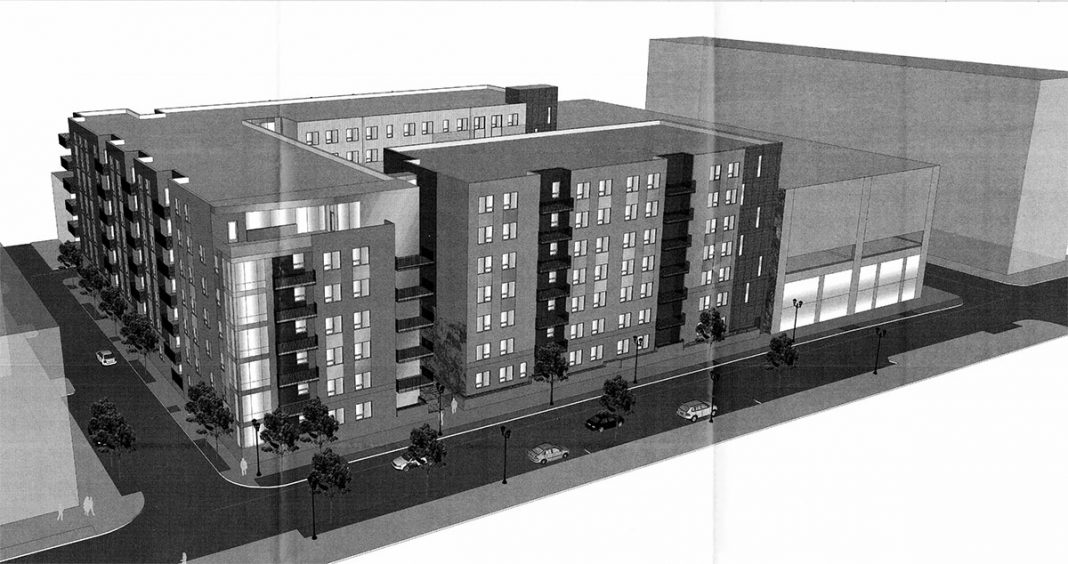 Be careful—once you see this development plan, it’s hard to unsee it. Developers from Cincinnati, Ohio–based Capital Investment Group have filed plans (16DEVPLAN1154) with the city to build a multi-family apartment building and renovate an existing parking garage on a prominent two-acre Fourth Street site between Guthrie Street and Chestnut Street.

Today occupied by drab pink-EIFS covered office buildings owned by KentuckyOne Health, the site has long been for sale. The existing three-story and two-story concrete structures at 535–539 South Fourth Street, both with basements, would be torn down to make way for a new C-shaped structure connected to the 1960 garage at 321 West Chestnut.

Plans call for 237 apartments in an 81-foot-tall, seven-story building. Seven thousand square feet of commercial space in the base of the parking garage would be renovated for retail and apartment amenities such as a clubhouse, office, and fitness area built on its roof.

According to drawings filed with the application, the Fourth Street Apartments have been designed by the Cincinnati office of GBBN Architects. The international firm also has an office in Louisville. Martin Koepke Design of Cincinnati is listed as the project’s landscape architect.

On the surface, the numbers look good—hundreds of new apartments in the core of Downtown Louisville. Who wouldn’t like to see a new seven-story building on Fourth Street? But an examination of the material filed with the application reveals the Fourth Street Apartments miss the mark—by a lot.

Among our chief concerns is that no retail is being added to one of the most prominent sites in Downtown on Louisville’s storied retail shopping street. City leaders have spent a small fortune preparing study after study, making and remaking the streetscape in efforts designed precisely to attract retail to the area.

Instead, the ground floor of the Fourth Street Apartments is occupied by residential units set behind planters and landscaping. “The building will… include some varying setbacks along 4th Street similar to the approach along Guthrie,” the architects wrote in their project summary, “allowing for additional landscaping and privacy of the residential units near grade.” (Strangely, the architects spend half their description detailing how the building will meet fire code.)

Worse, the design of the Fourth Street Apartments offers some of the cheapest materials known to architects. The first floor along Fourth Street is clad in brick, rising to full height on the corner of Guthrie. But the majority of the space above the ground floor is indicated as being covered in faux-stucco EIFS, fiber-cement siding, or metal panels.

Along Fourth Street, planters line the sidewalk, giving it a blank surface. Ground floor residences are slightly elevated to avoid direct sightlines into living rooms. An opening in the facade forming an entrance into the building reveals a glimpse into the landscape courtyard, which is shown with a swimming pool for tenants. Balconies are shown prominently on all sides of the building and architects have included a “bridge” detail clad in glass that helps indicate the building entrance.

Plans note that renovations to the parking structure will be designed later, but architects noted that each floor of the garage will be connected to the new apartment building to improve access.

The Fourth Street Apartments feels forcibly formulaic in a way we’ve criticized other recent development proposals that, in comparison, now look much better. There’s nothing that indicates this building is particularly suited for the conditions of this site. That’s a problem uniquely solved by a city’s design review process. But that requires a city to hold tight to its standards, be able to look a shiny new building in the facade, and ask for more. Louisville today is booming, and a developer that wants to work in that atmosphere will stick around.

As it stands, the Fourth Street Apartments have a distinctly suburban quality better suited for a residential street, not in the core of a major downtown. Besides, imagine how awkward it would feel along Fourth and Guthrie streets to have retail on one side of the street and living rooms on the other.

It’s still early in the process, however—Capital Investment Group has not yet closed on the Fourth Street properties. And there’s one small fix that could give the Fourth Street Apartments a major boost: giving prominence to the ground floor and adding retail at the street level. The gross floor area of the new building is 38,775 square feet, so it’s reasonable that a good chunk of that could add to retail on Fourth and Guthrie.

Capital Investment Group President David Bastos has declined to comment to local media on the project so far, so we’ll have to wait until the developer shares more or the city weighs in. We’d love to get behind a major new development on Fourth Street, especially one that would bring so many new residents. But there are some serious concerns with the Fourth Street Apartments that we need to see resolved first.