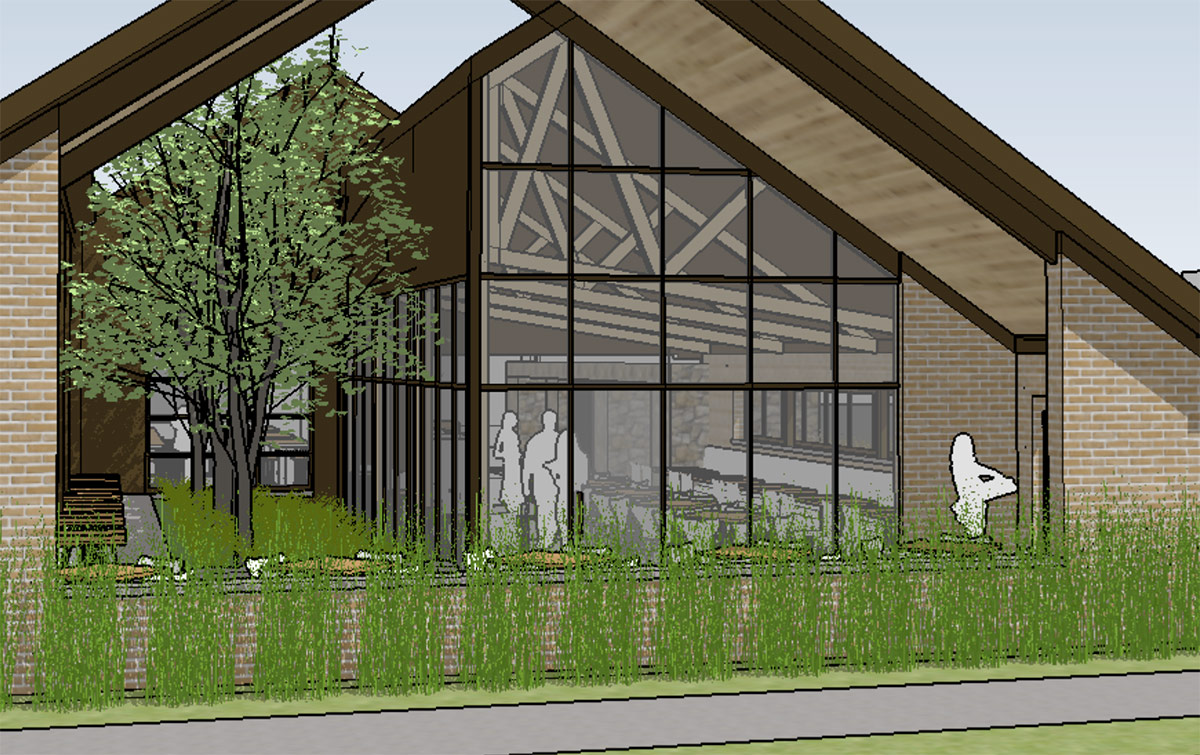 It’s a common refrain that buildings today aren’t built to last. Compared to the sturdy masonry of the 19th century of the hulking concrete work of the 1950s and ’60s, structures from the late 20th century can feel flimsy in comparison. And it doesn’t help that big retailers seem to design in a short shelf life that makes bulldozing and starting over easier than renovation.

So it’s particularly fascinating to see an adaptive reuse of a circa 1980s office building on the Schnitzelburg side of Goss Avenue into a bar and restaurant known for featuring local craft beer. That’s exactly what’s happening at 1030 Goss Avenue where an unassuming wood-frame structure built as a rehabilitation center for veterans is being converted into the Germantown Craft House.

“It’s a pretty standard wood frame building with wood trusses every two feet on center—it’s in pretty good shape because it’s not that old,” Jeff Rawlins, principal of Louisville-based Architectural Artisans, told Broken Sidewalk. “We couldn’t afford to scrap it and start all over again.”

The Goss Avenue site is the short-lived corporate offices of developers Underhill Associates, who purchased the site when scouting the neighborhood for their Germantown Mill Lofts project. The bare-bones structure, designed by architect Cecil Brumley, is set back from the street, faces a parking lot, and sits behind a tall chain-link fence topped with barbed wire. It’s not a neighborhood player.

Rawlins’ design reengages the building with Goss Avenue, giving it a much-needed street presence. The new design essentially extrudes the basic form of the building to the sidewalk level, pulling the existing roofline out and slicing into it to create an outdoor patio space in dialogue with the sidewalk.

The facade is held about three feet off of the sidewalk with a landscaped buffer and a knee wall at the patio. “When you’re walking along the sidewalk, you’ve got three feet of landscaping and then a wall that’s up a little bit,” Rawlins said. “You can talk over that but it’s enough of a barrier that you’re not going to try to walk through it.”

Rawlins initially looked at designing the structure around an existing tree out front, but realized its location along a utility path likely would kill it during the renovation. “Instead of trying to make a renovation that works around this tree we can’t save,” Rawlins said, “let’s pull the building all the way to the sidewalk and carve out a space within our building to put three new trees.”

The team peeled away an 8-by-30-foot section of roof for the new tree grove. “It’s set up so there’s a glass dining room on one side of the green space and then a patio that wraps around the other side and the front,” Rawlins said. “It becomes this sort of oasis patio inside the volume.”

The entrance to the Craft House is still around to the side at an existing canopy. “We’re trying to make a stone entry piece underneath that canopy that sort of compresses you and changes how you feel before you go into that space,” Rawlins said.

Once inside, Rawlins was faced with low, eight-foot ceilings in the existing structure. To create the bar room, he simply removed the ceiling. “In the main room we want to vault it and expose all the trusses,” Rawlins said. “So it’ll be visually kind of busy with all those wood trusses but at least the volume will be larger.”

The real surgery takes place toward the front of the structure. “We’re taking off the front 20 feet or so,” Rawlins explained. “Because we didn’t want that compressed volume everywhere, we felt it was important to peel off a chunk and then put back an addition that goes closer to the street that’s more open.”

Besides upgrading a major eyesore along Goss Avenue, the Germantown Craft House renovation shows that it’s possible to adapt anti-urban architecture to respect the street and become an engaging part of the built environment. Where else around town could benefit from such a rehab?