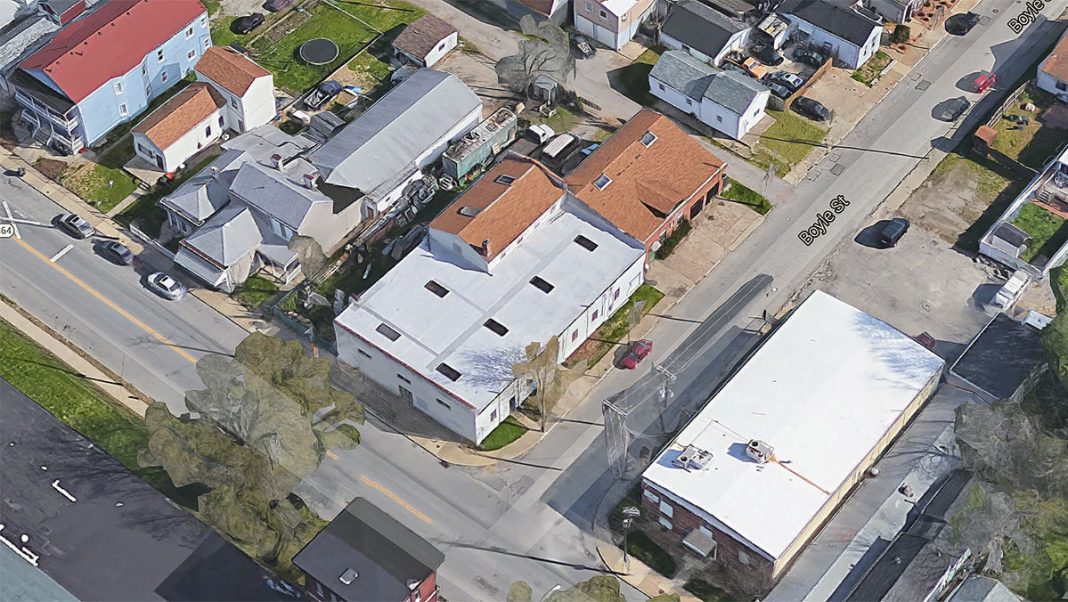 Here’s a bit of quirky Germantown history for you: If you look closely at the roof of the cinderblock warehouse building housing Ackerman Millworks at Goss Avenue and Boyle Street, you might see the roof of a shotgun house poking up in one corner. That’s because the structure was actually built around two shotgun houses sitting on the corner in 1982.

“George [Glassner] built his bakery, Glassner’s Bakery, behind the houses (the small brick building in the backyards of the houses),” according to neighborhood beautification group Three Points. “In 1975, Ray Ackerman purchased the properties with the intent of moving his booming business from a garage on Schiller Avenue to the new space. Ray built his new building around the 2 houses that stood on the corner. One of the houses would eventually come down, but the skeleton of the other is still inside of the new building.”

“I think the history of the area is just so vibrant,” Jennifer Chappell said of the Germantown and Schnitzelburg neighborhoods. Chappell is founder of Three Points Beautification, the group that, in 2014, installed murals and landscaping improvement a couple blocks west at the intersection of Goss and Logan Street. She’s back with her latest mural plan at the site of the Ackerman building.

Plans for a large mural at Goss Avenue and Boyle Street in Germantown have met their fundraising goal and are moving forward—but there’s still time to get involved. The group, Three Points Beautification, which in 2014 installed murals and landscaping improvement a couple blocks east at the intersection of Goss and Logan Street is spearheading the new project.

Besides general fundraising, the campaign offered the community a chance to be directly inserted into the mural. For $20, a person’s name is included in the mural, but for $200, mural artist Stephen Paulovich will add a person’s face into the scene.

“That’s something that’s really spoken to people about the project—getting a face on the wall,” Chappell told Broken Sidewalk. Faces will be close to life scale. “A lot of people are putting relatives up as a surprise. Some people are putting themselves up there.” Around 20 people have already signed up to have their face or a loved one’s face included. “We have a lot of people that are really ingrained in the community—fixtures of Germantown,” she said. “It’s good to give them an opportunity to be recognized.” The total cost of the mural and planned improvements is $15,000. Funds from the Ioby campaign help offset that, and Chappell said she hopes to raise as much as possible from the campaign. The remaining cost will come from the Three Points bank account, corporate sponsors, and, hopefully, from Councilpersons David Tandy and Pat Mulvihill. But that still leaves about a $3,000 funding gap that needs to be covered.

“Anything we get above the $5,000 on the fundraising site now is so helpful because it fills in that gap of $3,000 we’re missing,” Chappell said. She added that Three Points is considering hosting additional fundraising nights at local bars like Four Pegs to cover that gap. “Every penny goes toward the mural project.”

The mural will fill two sides the Ackerman Millworks building across from the newly completed Germantown Mill Lofts. The mural design will honor the history of the building, formerly Glassner’s Bakery and now Ackerman Millworks, and the old Louisville Cotton Mill across the street.

“It’s very real to life—very detailed,” Chappell said of the mural. “It won’t go up as fast as a traditional mural that might have a lot of color blocking.” She compared the mural to an old sepia photograph but with more color, noting that they didn’t want to overwhelm the area with a mural too bright or busy. “It should blend seamlessly with the streetscape.”

Three Points also plans to add landscaping to the corner, improve lighting on the exterior of the building, and replace a dry-rotted door on the structure.

Chappell and Paulovich will be on the ground during the upcoming Three Points CycLOUvia on Sunday, August 7 working on the mural. The wall will have already been primed and prepped for work to begin in earnest. “I will have a tent set up at the Ackerman building,” Chappell said. “The wall will be primed and he’ll be painting live. The artist has already started it in his shop, drawing things out.”

This upcoming Saturday, July 30, Three Points will be hosting a Volunteer Day. Chappell and others will be around the area laying down new mulch and landscape fabric, planting new plants, and sealing the previous Three Points mural.

Once the fundraising campaign ends on July 31, Chappell said she will be able to finalize all of the names and faces that will be included in the mural and get the to the artist to finalize the design. If all goes according to plan, the mural should wrap up next summer—Chappell noted that they have to take a break as you can’t paint during the winter.

You can still donate to the project here.