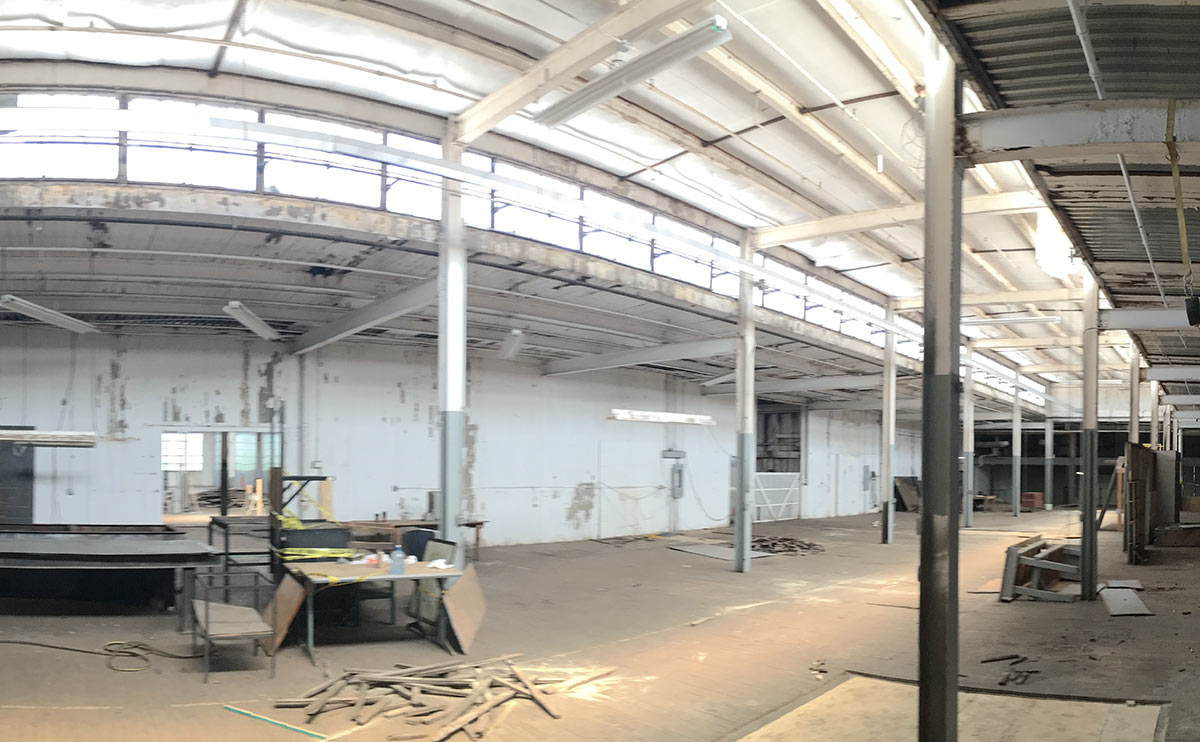 On April 18, Heine Bros. Coffee revealed plans to locate its headquarters in a historic industrial building on the edge of the Portland neighborhood. We toured the enormous building at 13th Street and West Main Street with Gregg Rochman of Shine Contracting, the group behind the structure’s renovation, to get a look at what’s in store.

The first thing you realize when you walk into 1301 West Main Street is its sheer size. The floor plates here are an acre, according to Rochman, and with light flooding in from oversized windows and clerestories, it certainly feels every square foot of that. The two-story, 80,000 square foot structure will eventually have multiple tenants—think hip offices, breweries, and studios—which will make it into an active hub and prominent visual gateway to Portland.

Inside, Rochman walked through the southern half of the building where the coffee company is taking 16,000 square feet. He pointed to a loading dock on the southwest side where he said green coffee beans will be loaded into the facility and stored in a humidity-controlled environment. From there, beans move through the enormous factory floor where they’re roasted and stored before being shipped out to Heine Bros.’s 13 area retail locations. A training facility is also planned where new hires can learn about the roasting process and how to make specialty coffee drinks.

Along the south facade, a row of existing offices faced with large windows will be completely transformed and expanded into the company’s corporate headquarters. Currently, Heine Bros.’s corporate offices are located above its Crescent Hill outpost and it operates a small warehouse in the Clifton neighborhood.

The overall renovation is being handled by Louisville-based Pickett Passafiume Architects, and Louisville interior design firm studio threesixty will work with Heine Bros. on its new space.

The structure was built in 1927 of concrete, brick, and steel with limestone detailing on the facade. “It’s just gorgeous,” Rochman said. “We drive west on Main Street to get to the rest of Portland practically every day.” The building’s stout but sturdy appearance, with a slightly elevated ground floor, gives it a prominent gateway feel along West Main.

“It was in really good shape compared to the stuff I’m used to dealing with,” Rochman said. “There’s some cleanup that we’ll need to do, but in general the building is in exceptionally good shape.”

The structure was previously home to Universal Installations, an HVAC supplier and contractor for the Home Depot. “They were owner–occupier,” Rochman said. “Richard Ciresi and Bonnie Ciresi, his wife, have owned the building for the last 17 years. They also have a love for beautiful old buildings so they have done a decent job of keeping it up and really paying attention to what it has to offer. They’re thrilled that we took it over because they know we’re going to take good care of it.” There’s still some restoration work to be done. “When we purchased it, there was clearly some deferred maintenance on the [hardwood] floor,” Rochman said. “Unfortunately, some folks that had used the building in the past had run forklifts over this tongue-and-groove maple, rolled it, and ruined significant portions of it. But compared to an acre, most of it is in good shape.” Shine Contracting has been removing damaged portions of the wood floor and salvaging and what it can for reuse inside the structure. “We’re pulling up this maple, carving out all the rot, and anything we can save we’re de-nailing and preparing for reuse, Rochman said. Rectangular patches of plywood and piles of wood indicate where that restoration work has been going on inside the warehouse space.

The remaining 24,000 square feet on the ground floor is still up for grabs. “We are courting people—and people are courting us—to use the rest of the space,” Rochman said. “There are breweries interested, there are a couple of them we’ve spoken to and there’s one more that’s interested in looking. There are a few different business uses—the high-tech want the rustic, cool, hip office feel. A potential manufacturer of recording devices. A sort of upscale flea type operation—not Flea Off Market, but not completely different than that. Those are types of uses that show real interest—people I have spoken to multiple times.”

And then there’s the basement, which is not your typical basement. Because the ground floor is lifted up (Rochman speculated the design was to keep the structure out of the flood plain), large windows allow light to pour into the southern part of the subgrade level. Most recently, the space has been used for parking. “That’s not the highest and best use for it, particularly along the exterior walls because you do have light coming in,” Rochman said. “We’re going to take it one step at a time to see who shows interest.”

When complete, the structure will really help to pull people westward, under a train trestle into Portland proper, where plenty more activity is going on. It will also help to anchor, along with the Peerless Distilling Company at 10th Street, a forgotten slice of city north of Main Street where an expanded Waterfront Park is slated. And it’s just the beginning of creating a warehouse district in the area’s potential-rich stock of large buildings.