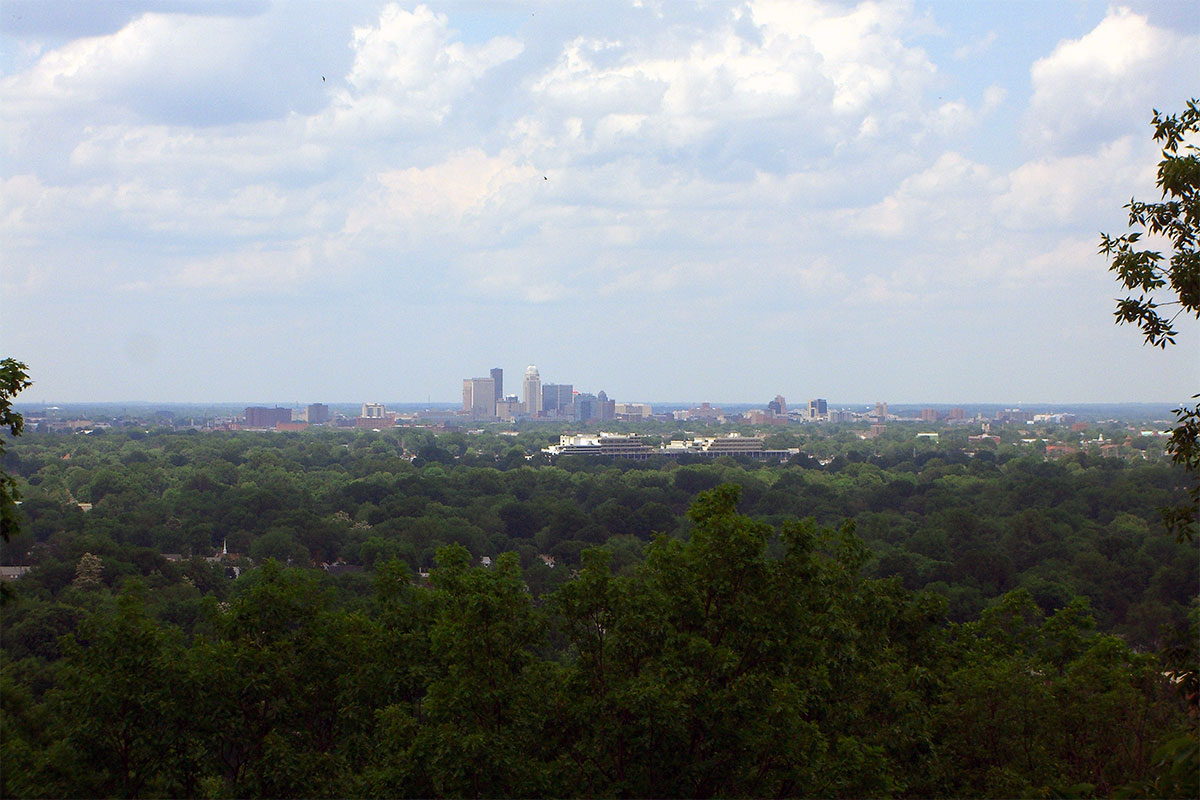 Iroquois Park’s Northern Overlook, with views of downtown and the Ohio River valley, offers the city’s finest natural panorama. After suffering decades of degradation from vandalism and erosion, Metro Parks, in partnership with the Olmsted Parks Conservancy, is spending $1 million to make the overlook more resilient, accessible, and handsome.

This project is the fourth in a series of major capital improvements that followed the release of a 1994 Iroquois Park Master Plan. It consists of three primary elements: a new overlook, an accessible path, and a parking lot. While these elements alone sound unremarkable, the project is well-designed to tackle the area’s fundamental weaknesses. The summit of Iroquois Park, including the Northern Overlook, has been continually devastated by stormwater and drainage problems for a century. The overlook was previously accessible via the 23-foot-wide Downill Road (aka Iroquois Park Road), an immense road given its function. The water rushing down this road has destabilized the surrounding soil and causing severe erosion and the loss of a switchback trail that led to the summit.

To contend with these problems, the portion of Downill Road that leads to the overlook is now car-free, and has been pared down and repurposed as a 10-foot-wide accessible path. There are rain gardens and bioswales on either side of this path that capture stormwater and runoff.

If you drive, there’s parking at the new Sullivan Grove lot that accommodates ten vehicles (two ADA, with eight additional spaces on the entry road and on Topill Road, for a total of 18 spaces). This new parking lot will act as a trailhead from which you can take the accessible path to the overlook. And stormwater shouldn’t be a problem here—the runoff from the parking lot will be directed into a bioswale where it’s held, and then slowly released.

The overlook itself is also being reconstructed. Previously defined as much by the sea of pavement surrounding it and its resemblance to a hot tub, the new outlook is green and modest.

“The overlook itself has been raised in elevation by about six feet in order to meet pathway gradient requirements for the accessible path,” Martha Berner, landscape architect with Metro Parks, told Broken Sidewalk. “Most of the space between the new overlook and the edge of the old overlook will be a grassy slope for hanging out and watching the sunset. There will also be a stone bench and seat wall.”

“All of the fill used to raise the elevation of the path and overlook was recycled on-site from the demolished remains of the old overlook,” she continued. According to Berner, the cost of the recycling plan was $14,500—which included hauling away materials that couldn’t be reused. The recycling plan reduced the price of demolition hauling from $49,000 to $14,500, resulting in a cost savings of $34,500. Berner said this was the first time Metro Parks has recycled old materials on such a large scale. By addressing stormwater issues at its peak, this project is critical not only to Iroquois Park’s crown, but everything below. There’s new opportunity to restore trails that were destroyed by runoff. The next—currently unfunded—phase of this project will replace the old switchback trail that was washed away. Stairs will lead from the trail to the top of the overlook. The Corbly Trail has been redesigned, but needs funding; and the Woodland Trail also needs to be built.

Once these elements are complete, the Sullivan Grove parking lot will act as a junction, where multiple paths lead to the overlook. It’s well designed to accommodate a range of visitors. Until then, visitors can visit the reconstructed Sullivan Grove and Northern Overlook, set to be completed “this spring.”

[Top image of the view from the Northern Overlook by Bryan Siders / Flickr. Historic photo in the slideshow circa 1919 courtesy UL Photo Archives – Reference.]