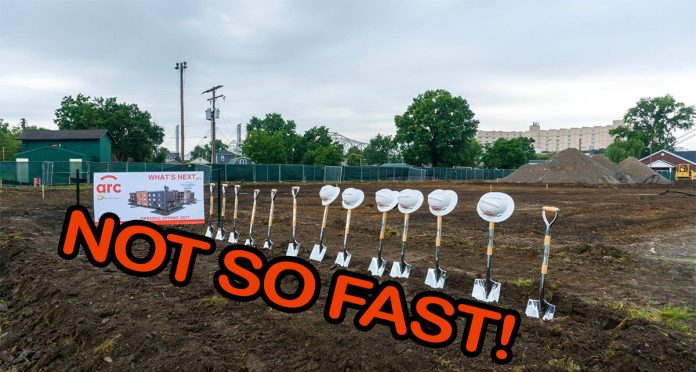 This morning, we wrote that a three-story, 98-room hotel had broken ground last week in Jeffersonville. The $15 million Marriott TownePlace Suites, being developed by ARC and Dora Hospitality, is to be built across the street from Big Four Station park, where the popular pedestrian and cyclist bridge touches ground in Indiana.

In our report, we lamented that developers had eliminated a retail component from their plans, creating, effectively, a blank facade along the park. But today, Nathan Pruitt, Jeffersonville’s Director of Zoning & Planning, told Broken Sidewalk that retail should never have been dropped from the plan in the first place.

According to Pruitt, the project’s development plan had already been approved with a promise of about 1,200-square-feet of retail space—and the city is not prepared to see it go. It turns out developers brought construction documents to be approved by the city and a good catch caught the missing retail.

Jeffersonville is sending the project back to the Planning Commission on July 26 to discuss the matter. Among the possible outcomes, the commission could reject the revised development plan without retail, requiring a new compromise to be made, or the developer could go back to the original approved plan.

Given the hotel’s prominent site next to the park, this is welcome news for Jeffersonville.