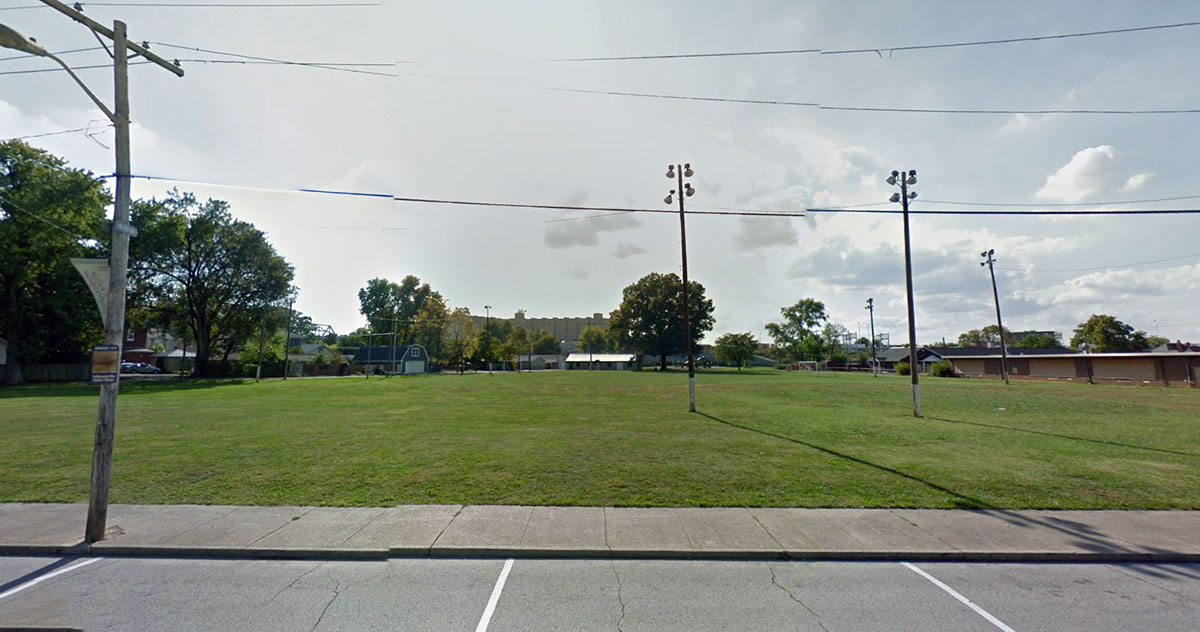 A wedge-shaped park in Jeffersonville has quite the story behind it. Colston Park, across Mulberry Street from Big Four Station Park and the entrance to the Big Four Bridge, is the final resting place for up to 700 unmarked Civil War–era graves, many of them soldiers.

But Colston Park might soon be home to the living as well, according to Elizabeth Beilman’s report in the News & Tribune. This week, the Jeffersonville Parks Authority unanimously voted to give the park to the city’s redevelopment commission, which would in turn look for a developer to build housing on the site.

“We need residents downtown,” Beilman quoted Jeffersonville Mayor Mike Moore as saying at the meeting. “This is a perfect opportunity to put some nice high-end brownstones, putting people living in the community around these restaurants and businesses.”

It remains unclear what will become of those soldiers’ remains, and to what extent the site is covered with graves. A 2012 WDRB report noted that an archaeological dig turned up not just the cemetery, but also structure foundations, old pottery, and old alleys that once ran through the site. The report speculated then that “If the space is developed, hundreds of graves may need to be moved.”

Only a 400-foot-wide by 120-foot-deep portion of the park running along Mulberry is being considered for redevelopment, so that could make the redevelopment process a little easier.

“Moore said the redevelopment commission likely will want to develop just that portion, keeping the rest of the land behind as greenspace,” Beilman wrote. A smaller Colston Park would remain behind the development.

Once the land is officially transferred and appraised, the commission will issue a Request for Proposals (RFP) for developing the site. A development plan would then be chosen from interested parties.

Civil War Cemetery: On this site, 1861–1865, are buried several hundred Union and Confederate soldiers, killed in the Western Campaign. Lack of interest from distant families allowed deterioration of the wood grave markers and heavy overgrowth. In 1927, the Jeffersonville Council determined “better the sound of children’s footsteps at play than the silent stride of the nearly forgotten great spirit army here at rest.” The only intact stone marker was moved to Walnut Ridge Cemetery. No bodies were exhumed.

A small existing building could also be used for community meetings. To the north of the park, a closed elementary school is to be demolished to make way for a Marriott Towneplace Suites. Demolition is expected to take place in coming months, Beilman reported.

While Moore used the term Brownstone to describe the housing type, we’re presuming he was using the term as shorthand for “Rowhouse.” The two are very similar, although the former describes a specific brown Triassic-Jurassic sandstone material commonly seen in Brooklyn’s housing stock.

Unfortunately for Brooklyn—and the rest of us—that brownstone material is in short supply. According to a New York Times report in 2012, the last major brownstone quarry has shut down:

Brownstone, which is really just a brown sandstone, is still quarried in a few spots around the world — including Britain, China and Utah — but stone fabricators and materials experts say that there is really nothing quite like the stone that comes from Portland [Connecticut]…

After nearly 20 years at the quarry, Mr. Meehan said his company had extracted what it could from the quarry without making significant investments to get more. The land, which he leases, has been put up for sale. At 63, he said, he is ready to move on.

While the development site is slender, it could support a little more density than rowhouses and still blend with the neighborhoods south along the Ohio River. Being situated between two parks and at the entrance to the region’s preeminent pedestrian bridge, this site is certainly a prime spot for a boost of density.

We’ll be closely watching how this one takes shape.