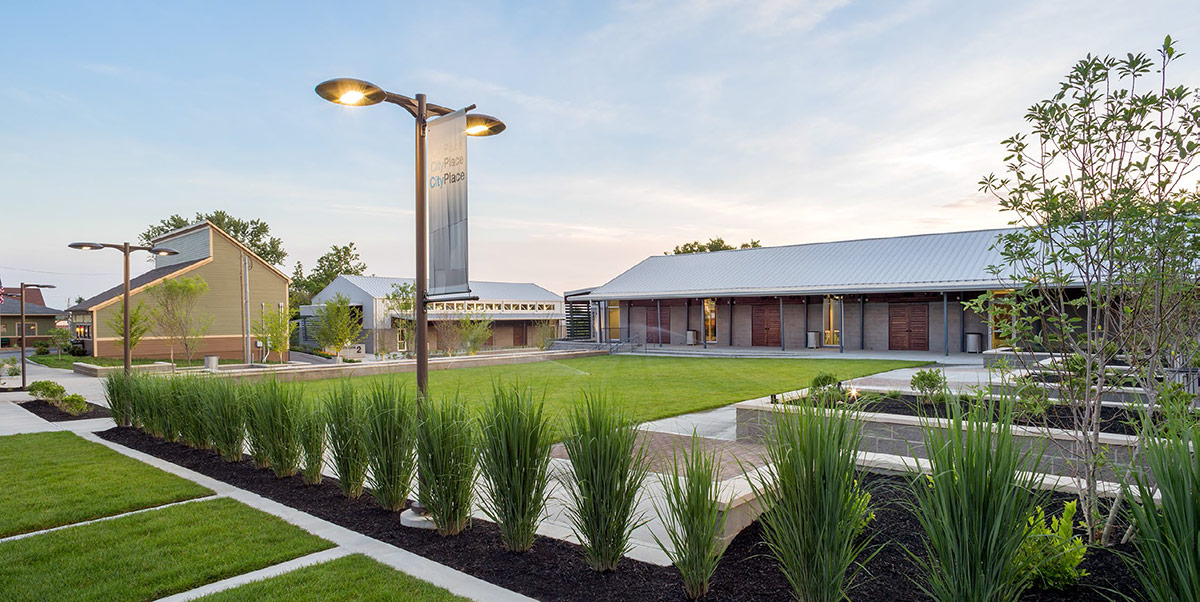 Landscape architecture is such a profoundly interesting field (no pun intended) because one project never does just one thing. Landscapes are the original multi-taskers. A single project might create a beautiful park, but behind the scenes, it’s also helping to store and manage rainwater runoff, helping to clean polluted water from our roadways, providing important social spaces within cities, and creating a healthier urban habitat for humans and wildlife alike.

That’s why we’re so excited to see the best examples of landscape architecture honored each year by the Kentucky chapter of the American Society of Landscape Architects (KYASLA)—we can all learn from these amazing projects. And the KYASLA got down to the business of award-giving earlier this month at its Annual Meeting, Expo, & Awards Ceremony, which took place this year on March 4–5 at Lexington’s Grand Reserve.

Seven awards were issued for professional landscape architects, student work, and distinguished individuals. Louisville picked up two awards for projects by Gresham, Smith & Partners and MKSK. LaGrange and Lexington each had one winner.

View all the winners below.

An integral component of the overall site design is the movement of water. The concept is an interpretation of the natural hydrological cycle by creating moments and movements of water from collection, to distribution, and finally transpiration. The site diagram on the left represents the general components of this landscape system. Water collection and distribution is represented in blue and shows the path of water as it feeds landscape material. All overflow water will make its way to the bioswales, which are indicated in orange, where the remaining stormwater will be filtered. Areas in green represent infiltration opportunities, which will infiltrate surface runoff. The final component is the increase in canopy coverage, shown with green circles, which will return water into the atmosphere, and completing the hydrologic cycle.

At the request of the client, the site design leans favorably towards creating a verdant park like plaza as an oasis from the nearby downtown. The plant material selection reinforces this premise by using plants that engage the senses and guides visitors through the site. Spatial considerations were made to both reinforce the architecture and, at times, to selectively contrast it to call attention to design features such as the broad sweeps of the bioswale area.

The Louisville Southwest Regional Library is the first of three new regional libraries strategically positioned to serve the suburban regions of Metro Louisville. The project was a true design collaboration between the Louisville Free Public Library and the design team. Over 120,000 books and media offerings are available in a building that aspires to be a vessel for daylight. The exterior was inspired by the act of discovery, with symbolic metal curtains that are peeled away to reveal greater knowledge within. A variety of earth tone materials were selected for their durability, texture, and depth, allowing daylight and shadow to animate the facade throughout the day. The surrounding site re-imagines the suburban parking lot as a vessel for rainwater, allowing the property to collect and infiltrate all of the water from several surrounding properties to relieve the burden on the municipal system.

The project is a model of sustainability for Louisville, having received LEED Gold certification. More importantly, the new Southwest Regional Library aspires to be a landmark in the community for generations to come, offering lifelong learning to its users, and acting as a catalyst for future neighborhood development. Rsquared, (Reuse & Revitalize) is a new program being developed by the Vacant and Public Property Administration (VPPA) in Louisville, KY., to combat issues of vacancy and abandonment. This program is a comprehensive umbrella initiative which focuses on sustainable methods to reduce blight and vacancy among Louisville neighborhoods.

The project goals of Rsquared are summarized as: educating the public and city on current conditions related to vacancy and abandonment within the given study area; development and implementation of a multifaceted public engagement process; reduction of vacant property through identifying of and empowering partner organization(s) and; helping them wotk through a design process and working towards implementation.

In the summer of 2015 VPPA and other Metro Louisville staff engaged Gresham, Smith and Partners and their team of landscape architects and urban designers, to produce the program’s first edition of RSquared— Rsquared 40212. This initial effort developed an integrated community input process based on research and analysis that allowed citizens to express their vision for vacant lot reuse strategies by utilizing the following four key stages of the planning process: Education, Engagement, Empowerment, and Implementation.

The South Limestone Street and Euclid Avenue/Avenue of Champions corridors provide critical links between the University of Kentucky, Downtown Lexington, the Chevy Chase shopping district, and surrounding urban neighborhoods. Across the country, universities and cities have reinvested in the areas adjacent to college campuses to better integrate
them with the surrounding urban fabric, improve the university experience, revitalize neighborhoods and attract reinvestment. This is already underway in Lexington, with the City’s investment in the South Limestone streetscape, UK’s investment in new student housing and student center that will engage the Limestone and Euclid corridors, and the private market investment in a new Kroger grocery on Euclid. This study builds on this momentum by identifying market opportunities, strategies and critical next steps that need to be taken in order to continue the successful transformation of these two corridors and the neighborhoods and university uses that surround them.

Despite being a “commercial” corridor study, this analysis takes a comprehensive approach, paying equal attention to the residential market, as the success of commercial areas is tied closely to the depth and quality of nearby housing and consumer markets. The report assesses current conditions in the study area, including a detailed analysis of residential and retail markets, and identifies opportunities for further investment that will continue to advance the upward trajectory of the two corridors and surrounding neighborhoods. This study considers site context, marketability opportunities and constraints, socioeconomic trends and characteristics, competitive supply, demand and market segmentation. These analyses result in conclusions about potential future resident characteristics, the housing and retail products they will demand, and the likely market performance of those development products.

While the state of Kentucky as a whole ranks low on mobility in regards to biking and walking compared to other states, the city of Lexington offers residents some neighborhoods with more amenities that actually promote and encourage walking and biking. These areas have been slowly growing as bike and shared use roadway infrastructure expand. However, Lexington is still a car dependent city. Walking and biking is more economic and provides a faster and more efficient mode of transportation for short trips to access goods, foods, and activities. The University of Kentucky’s campus proximity to Lexington downtown and the projected town branch commons redevelopment, could provide students with more opportunities for running daily errands by foot or bike. The project “in Motion” was developed to tackle walking and biking mobility and connectivity issues that resulted from a rapid changing on and around campus and to find solutions that promote walking and biking not only for students but also for residents of the downtown area by connecting the campus to the city through multiple urban streetscape designs. One of the main goals of ‘inMotion’ that set it apart from other projects was the collaboration of team members from different design disciplines. The participants had previously not worked together and were unfamiliar with the design process of the other. The project encouraged participants to take the lead and put to them the challenge of organizing teams with different design approaches to interact and collaborate with each other.

Although ‘inMotion’ models a streetscape project, it goes beyond the basic design to encompass other aspects of landscape architecture. Participants looked at multiple modes of transportation including transit, vehicular, biking, and walking in order to plan along transportation corridors and propose a smaller design that catered to a broader urban planning design. The site was specific as to the general northern end of the University of Kentucky, and then further specific to each group design. Designing each site included reclaiming unused or underutilized gathering and street spaces which were, in some cases, proposed to be repurposed as small parks or open public lands. With this work we are hoping to advocate on the importance of walking and biking as well as shed light on the multiple opportunities for creating street spaces that could bring students and downtown residents and visitors together. Lyle Aten’s lifetime achievements and contributions to the profession of landscape architecture throughout his career have had a unique and lasting impact on the welfare of the public and the environment. Lyle Aten was born in Macomb, Illinois. Joining the Navy at age 17, he later attended Western Illinois College with the intention of becoming a coach. A college advisor, based on the results of an aptitude test, suggested that Lyle consider the study of Landscape Architecture as it matched his aptitude for graphics, music, art, and nature. Taking that advise, Lyle switched schools, using his G.I. Bill for tuition to attend the University of Illinois, where he was fortunate enough to study under then Professor Hideo Sasaki, and the rest is history.

Most of Lyle’s professional work, leadership and service has been in the area of Land Planning. He began work on a temporary basis in Peoria Illinois, working with Scruggs and Hammond. His work took him to Lexington, Kentucky where he ultimately relocated as one of the first landscape architects to practice in the state. The Lexington office of Scruggs and Hammond began modestly with a staff consisting of one person and his assistant but grew to become one of Kentucky’s premier design offices. Lyle eventually became President of Scruggs and Hammond where he officially retired about 1993. This formally ended his landscape architecture design career in 2000, following completion of the Lexington Legends baseball facility. Lyle continued to serve the Lexington community, serving as a member of the Lexington/Fayette County Planning Commission for eight years. Reflecting on his career, Lyle was quoted as saying, “I have been very lucky. I was just very fortunate to be at the right place at the right time”. The Grady Clay Community Vision Award is named in honor of Grady Clay, Jr., the internationally acclaimed writer and urbanist. The award is an annual, statewide honor for those who are improving the quality of life for Kentuckians by offering design vision and creative solutions that sustain and strengthen Kentucky’s vibrant communities.

Since joining the Community Foundation in 2009, Lisa is leading the successful transformation of the Foundation’s approach to growing community giving and engagement. During her tenure the Foundation’s assets have increased 127%, gifts 494% and grants 537%. Additionally, the Foundation launched GoodGiving.net, the GoodGiving Challenge and charitable Giving Cards, strategies and services to make charitable giving simple, effective and accessible community-wide.

Under Lisa’s leadership, the Community Foundation is working to make Lexington an even greater city, with a focus on downtown and neighborhood revitalization, healthy food access and improvements to the built environment, including the Legacy Trail, the Isaac Murphy Memorial Art Garden and Town Branch Commons.