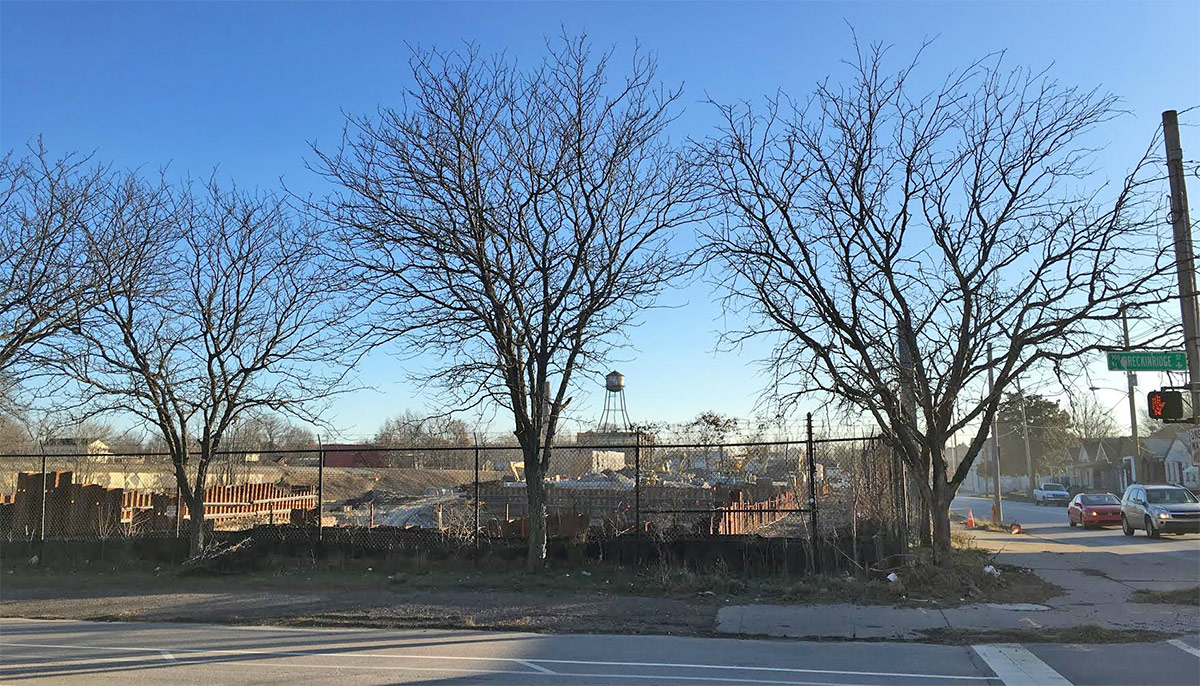 As far as I can tell, Louisville’s Metropolitan Sewer District (MSD) owes Smoketown at least four million dollars. Let me tell you why.

On November 16, I went to a community meeting about a building MSD is building in the neighborhood on the corner of Logan Street and Breckinridge Street. It’s called the “Logan CSO Interceptor Project.” CSO stands for “combined sewer overflows.” The “CSO Interceptor Project” is a fancy way of saying “catching the wastewater and stormwater before it flows into the Ohio River.”

The Logan CSO Interceptor is one of twelve CSO interceptors being built around the city. It’s part of MSD’s effort to comply with the Federal Consent Decree it entered into with the Environmental Protection Agency after the EPA found Louisville to be grossly and repeatedly out of compliance with the Clean Water Act.

Each of the other 11 buildings are being built “to grade.” This means that the structure will actually be buried below ground and a park will exist on top of the building. However, the Logan CSO Interceptor will be  a block-long, windowless, two-story building in a part of town that desperately needs green space.

Aside from feeling the blasting each day from the project in my law offices (one block west of the Interceptor), this November 16 meeting was my first exposure to the project. At the meeting, it was clear that neighborhood sentiment was strongly against the project.

The meeting opened with remarks from MSD’s new Executive Director, Tony Parrott. Mr. Parrott, responding to the dissatisfaction from Smoketown residents, admitted that the Logan project “did not have a good rollout” and lacked “community engagement.”

The Logan CSO Interceptor was the the first of the twelve CSO structures to be designed and built, Mr. Parrot explained, and he apologized for not developing good partnerships with Louisville Metro and for failing to get community input at the outset on the design of the building.

During the course of the meeting, we learned that after receiving input from other neighborhoods on their CSO Interceptor projects, MSD decided to bury each of the other 11 structures at grade. It was clear from the comments made by neighbors at the meeting that this was their preferred design, as well. (Imagine preferring a block-sized park to a two-story windowless brick bunker.)

MSD had studied the possibility of implementing this same at-grade concept for the Logan CSO Interceptor project and determined that burying the facility at grade would have cost an additional $4 million.

As a concession to the neighborhood, MSD is now offering the Smoketown community the opportunity to weigh in on the design of the two-story facade of the building. MSD has agreed to allow the community to spend $700,000 that was previously budgeted for bricks on some alternative facade of which the community approves.

This is a completely outrageous and unacceptable “concession” from MSD. It provides no new money to a project that, by MSD’s own admission, was created without community engagement. It asks the community to sign off on shortchanging the Smoketown community of at least $4 million.

MSD, without community input, decided to cut corners and save money on the Logan CSO Interceptor project. After hearing from other communities, it changed its Interceptor designs on every one of the other projects. These changes—no doubt—increased the cost of each of the other projects. Now, MSD is asking Smoketown to put $700,000 of lipstick on its pig instead of either:

Given MSD’s admitted shortcomings in its design and community engagement processes, MSD’s decision to save $4 million on its facility located in Smoketown can only be seen as shortchanging a neighborhood that is already all-too-familiar with shortchanging. That MSD expects Smoketown residents to be satisfied with a resolution that offers no new money but exchanges brick for some other veneer, is an insult to Smoketown.

Last week, the community had its first meeting for residents to sit down with the designers MSD has engaged to redesign the facade of MSD’s building. There are already some useful ideas about how the facility can be improved.

As the redesign process kicks off, I hope participants from Smoketown will use the “redesign process” to insist that MSD invest the $4 million it siphoned away from the Smoketown community back into the community.

Whether the residents want to invest the $4 million into the redesign of MSD’s building or insist on that money returning to the neighborhood in the form of a grant to the Smoketown Neighborhood Association is, as far as I’m concerned, up to the residents of Smoketown.

MSD has admitted its process was flawed. That flawed process led MSD to decide—without community input—to save $4 million on the Logan CSO Interceptor. After it got input from other communities, it learned that its decision at the Logan site was wrong and invested in more expensive projects in the 11 other neighborhoods. Yet, MSD has not returned to Smoketown to fix its $4 million mistake.

I urge Smoketown residents participating in the redesign project to insist that MSD reinvest into Smoketown the $4 million it mistakenly decided not to spend on our neighborhood.

[Editor’s Note. This article was cross-posted from the blog of the author’s, Ben Carter, law firm. It appears here with permission. Top image of the Logan CSO Interceptor under construction by Ben Carter.]