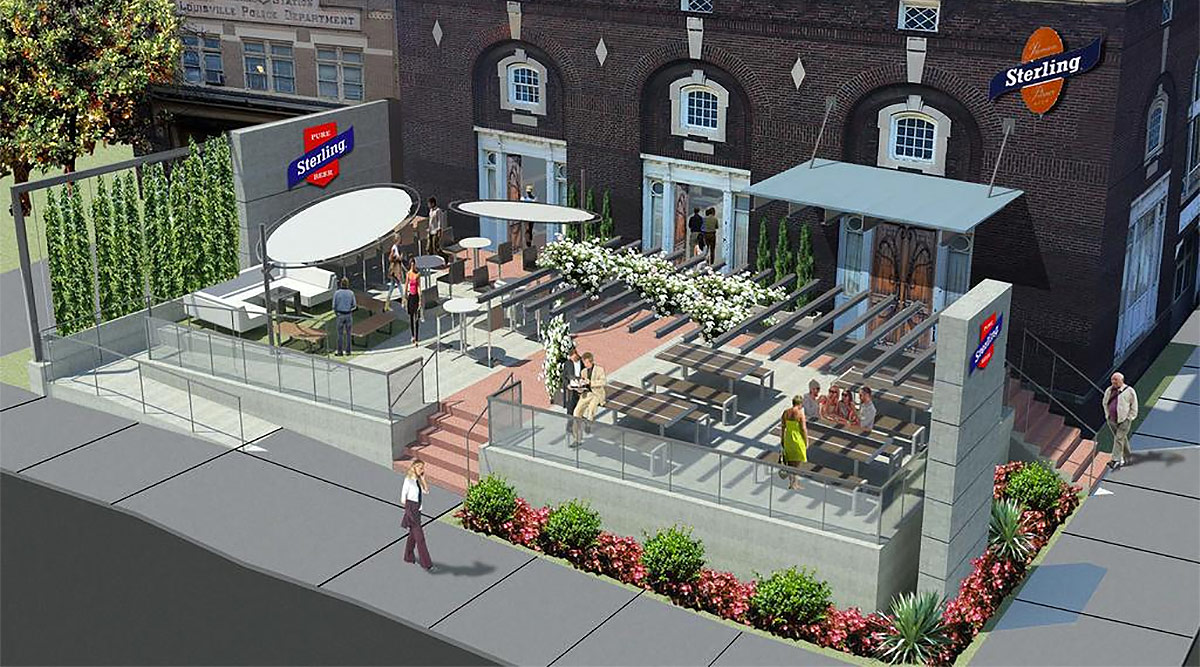 Speculation is over about what will fill one of Bardstown Road‘s most beautiful, and historically underutilized, buildings. Metro Louisville announced today that Louisville Sterling will purchase two surplus city-owned buildings at 1300–1306 Bardstown Road for a craft beer operation with a retail component.

As we previously reported, those two structures, on the corner of Bardstown and Rosewood Avenue on the Tyler Park side of the street, have been vacant since November 2012 when a consolidation of MetroSafe, the city’s emergency response system, made the buildings unneeded for city use. They were declared surplus by Metro Council last November.

Louisville Sterling, operated by brothers Todd and Ken Jackson, owns the Sterling beer brand, which it acquired in 2012, the city said in a press release. The historic Louisville brand dating to 1863 has changed hands multiple times over the years and had moved to Evansville and later Pittsburgh. Today it’s brewed in Stevens Point, Wisconsin.

“Louisville Sterling’s goal is to restore the historical structures for the purpose of establishing a craft house and tasting room and to move local production back to Sterling’s original home of Louisville,” the press release read.

According to the city, the Sterling brand has been nicknamed the “Beer of the South.”

The company will restore both early 20th-century buildings for the craft house and tasting room. The site will also include a gathering house and events space, offices, and a small brewing operation. Combined, both buildings cover about 15,000 square feet.

According to a report by Marty Finley at Business First, Louisville-based architecture firm Tucker Booker Donhoff + Partners has designed an architectural concept plan, seen above, of what the property could look like.

The southernmost building at 1306 Bardstown was purpose-built as a police station by architect J.B. Hutchings and continued to serve as such until just a few years ago.

Next door, 1300 Bardstown was built as a telephone switching building in 1917 and later served as the home for the Louisville Ballet. The city purchased 1300 Bardstown in 1995 from the Ballet for $235,000. Despite the outward appearance that there could be a grand ballroom inside, the structure hides a more generic layout befitting of its original use. The building is sturdy, however, built of reinforced concrete.

When we wrote that the buildings were declared surplus last year, a tipster informed us that a deal was already in the works. In early December 2015, Rebecca Fleischaker, deputy director of Louisville Forward, Metro Louisville’s department of economic development, told Broken Sidewalk in an email that “a sale is lined up, but is still being worked out.” She declined to give specifics about the pending deal, adding that the city would “not be putting the buildings out to bid or taking offers.”

“The property has been available, and has been shown, for about 3 years,” Fleischaker said. That marketing began once MetroSafe moved out. “This building was then marketed for redevelopment through Public Works and then Economic Development Departments, as well as being listed on the city website and Opportunity Space, a website that lists all city-owned properties available for sale,” she added.

Over that three-year span, a number of interested parties emerged. “We have talked with many business owners and individuals about the two buildings, but nobody had the finances to restore and fit out the building,” Fleischaker said. “Recently, however, we’ve been working with a group who was very interested, has the financing and was interested in moving forward in bringing jobs and investment to the area.”

As part of the deal, Louisville Sterling has agreed to perform environmental assessments at the two properties to determine how much cleanup might be necessary in redeveloping them. The city said the final purchase price would reflect a fair market value taking that cleanup into consideration. “Louisville Metro did have an appraisal of these properties done in anticipation of entering into a market-rate sale,” Fleischaker told Broken Sidewalk.

If all goes according to plan, construction could begin by fall 2016. The Sterling facility joins another major beer bar, HopCat Louisville, currently under construction just up the street.