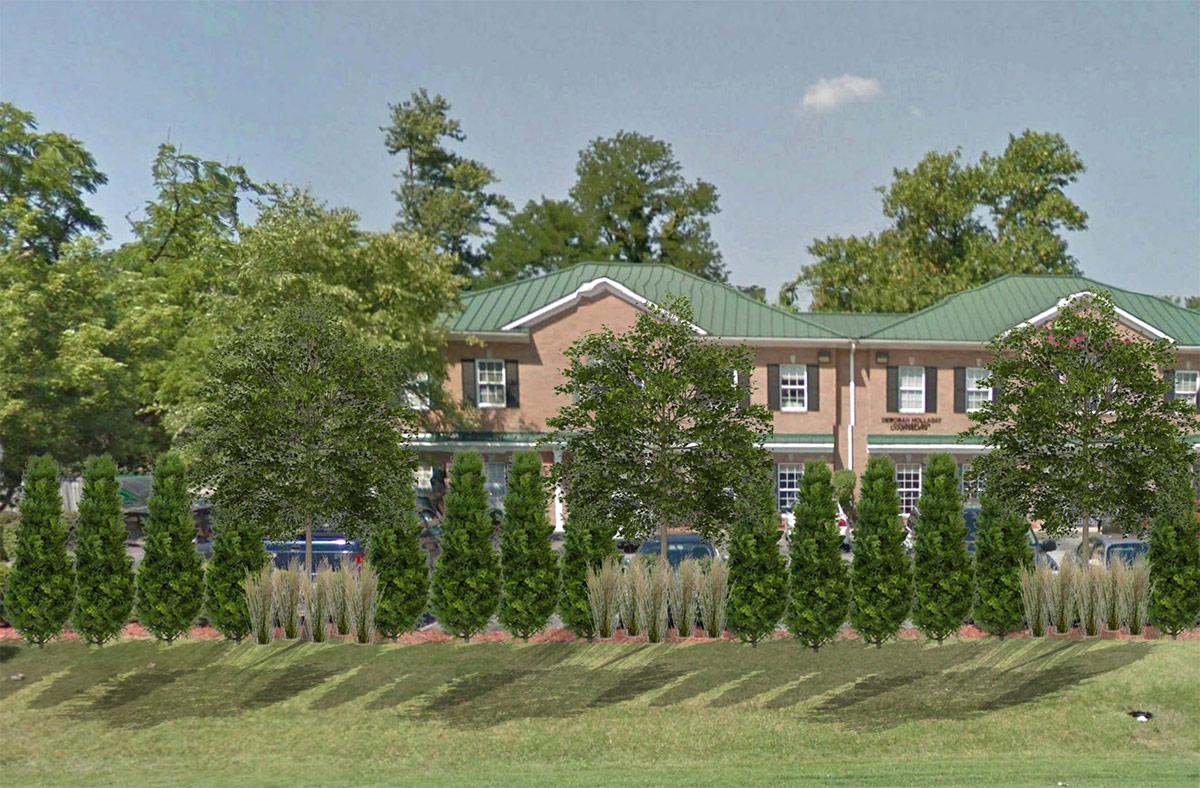 While looking through the city’s wrecking permit requests for our #DemoWatch page recently, three adjacent houses in Lyndon built in 1951 popped up (WR995210, WR995204, WR995208). They’re being demolished for an office park right at the main crossroads of the suburban town.

The Lyndon Lane Office Condos project was unanimously approved by the Louisville Metro Planning Commission back on April 7 (six commissioners present, four absent), following the advice of a staff report from Metro Louisville Planning & Design Services. Developers at Pinnacle Properties of Louisville needed the site to be rezoned from its previous R-5 and C-1 classification to OR, or Office–Residential, along with approval of its detailed district development plan and the granting of a waiver from section 10.2.4 of the Land Development Code to eliminate a required buffer.

The development plan, laid out by Mindel, Scott & Associates, follows Louisville’s land development rules for this area quite closely, which the staff report from Louisville Metro Planning & Design Services points out. The result is, unsurprisingly, a very suburban, auto-centric office park. The site is classified under the Neighborhood Form District, which means, according to the staff report:

The Neighborhood Form is characterized by predominantly residential uses that vary from low to high density and that blend compatibly [sic] into the existing landscape and neighborhood areas. High-density uses will be limited in scope to minor or major arterials and to areas that have limited impact on the low to moderate density residential areas.

The project calls for seven two-story office buildings, each 35 feet tall, to be distributed across the 2.73-acre site. Each building ranges from just over 6,000 square feet to 6,400 square feet. According to developers, the structures will look like other buildings it has built in office parks around the suburbs, like the image shown but with a shingle roof.

Previously, in early 2015, two suburban-style apartment buildings standing three stories tall with large pitched roofs and positioned behind the houses on Lyndon Lane were proposed for the site, which drew complaints from neighbors for being out of scale.

Plans call for the property to be developed in two phases. Most of the site will be covered in surface parking lots, which will require clearing all of the site’s existing trees.

To handle the rainwater runoff from all of that parking, a large stormwater detention basin is planned in the back of the site. Louisville codes require that new developments like this maintain pre-development levels of runoff. That basin will cover 6,865 square feet and is shown as two feet deep.

While most of the planned buildings line the parking lot, two of the structures shoulder up to Lyndon Lane, creating something of a sense of an urban edge along the street. That’s where the demolition of the three houses at 504–510 Lyndon Lane come in. The houses are typical small Cape Cod suburban houses from the ’50s ranging from 830 to over 1,200 square feet. Demolition can take place beginning September 3, 2016.

That’s an unexpected conclusion to draw, given that this project provides well over the parking minimum required for the site. It seems from the arrangement of buildings on the site plan and the consideration of the site individually from the larger Lyndon town center, that most people will be driving to work at this development.

“The Lyndon Town Center has proven to be a great location for office condo buildings of this kind,” the Planning Commission’s finding of fact stated, “because it is a center of fairly intense residential and commercial activity; and therefore, redeveloping this overall site will lead to a continuing revitalization of the Lyndon Town Center.”

This office park is already approved and is headed for construction, but perhaps we can learn a few lessons that can help inform updates to our Land Development Code to promote more compact, more walkable development that will, in fact, help reduce vehicle miles traveled—which this one will not.

First off, Louisville would do well to actually begin planning rather than leave it to developers to build out individual parcels piecemeal. The Lyndon Town Center isn’t much of a town center today, and this development won’t change that, but if we planned how the area could grow, with connectivity at the fore, we could more easily promote the kind of development that could make Lyndon’s core a compact, mixed-use place.

We’d also do well to reconsider parking minimums across the entire city. If we are serious about reducing VMT, promoting transit, biking, and walking, and reducing the urban heat  then we’ll stop requiring developers to pave over such large swaths of their sites. There are a number of changes to our codes that would also go a long way toward promoting the land use patterns that promote walkability and compact, connected development.

We shouldn’t praise a project for surrounding its parking lot with buildings to create a visual buffer to an unsightly parking lot as happened in this case. Perhaps promoting a layout that grouped the structures in a compact arrangement, close to other uses in a town center, would be a better approach toward promoting a walkable place.