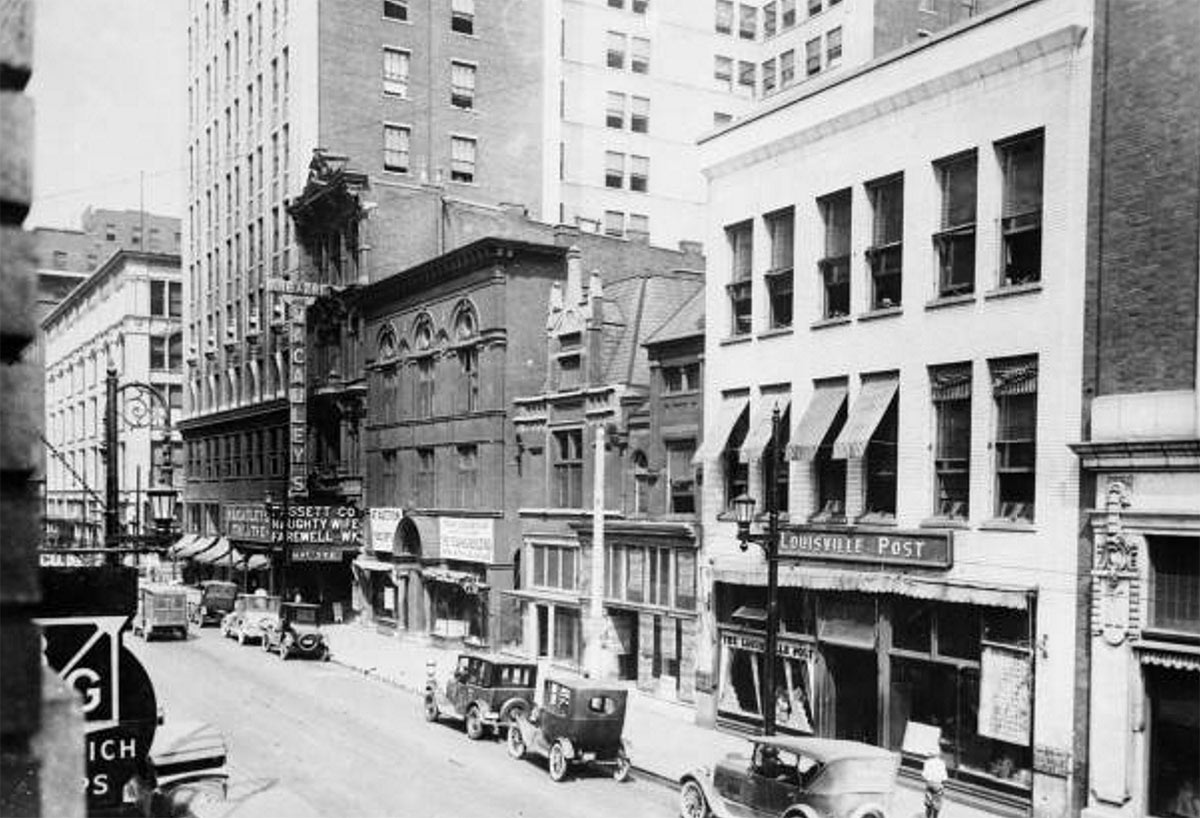 (Editor’s Note: As part of Preservation Month 2016, Broken Sidewalk is highlighting some of the most storied historic theaters of Louisville in an ongoing Focus on Preservation series. We’re kicking things off today with the theater that ignited Louisville’s romance with theater, Macauley’s.)

In 1873 when it was built on West Walnut Street, (now Muhammad Ali Boulevard) between Third Street and Fourth Street, the New Orleans Republican proclaimed Macauley’s Theatre as “one of the finest and most beautiful theatres in the Western country. It is fitted up with all the modern improvements. The ceilings are frescoed in deep rich colors.”

After the Civil War, mass entertainment such as American vaudeville became more popular since audiences had more money and more time in which to spend it. Louisville was growing as a trade center in the 1870s, and once Macauley’s opened, drama gained in prominence as well.

Actor Bernard “Barney” Macauley decided to build the 1,900-seat theater after settling in Louisville, but it was his brother, “Colonel” John T. Macauley, who operated it successfully for many decades after taking over management in 1880.

Barney made a series of poor business decisions, got the theater into debt, and eventually decided to return to the stage for a handful of years before his death. John worked with other theaters to keep actors touring in established circuits and many of the finest actors and actresses of the day graced the stage, including the debut of Louisville native Mary Anderson in 1875. When John died of cancer in 1915, his obituary in the New York Times stated: “every prominent stage star has appeared” at Macauley’s.

The architect chosen by Macauley was Pennsylvania-born John Bailey McElfatrick. He began building theaters in 1855 and moved to Louisville in 1865. By the 1880s he had relocated again and opened an office in New York City, where his two sons joined him at J. B. McElfatrick & Sons. The firm was well known for theater design across the country. Marilyn Casto’s book, Actors, Audiences, and Historic Theaters of Kentucky, describes McElfatrick’s design of Macauley’s:

[It] incorporated many features that came to characterize the firm’s work. Its preference for extremely ornamental facades with stone and wrought iron, combined with ornate interiors, was reflected in the Louisville theater, as was its tendency to use paneling and red or green with gilt or ivory interiors.

The firm is thought to have designed three hundred theaters in the United States and Canada; the Cinema Treasures website lists 42 known theatres built by McElfatrick, but only 6 are known to remain open. One of the most impressive is the Colonial in Pittsfield, Massachusetts, similar to Macauley’s in its grand scale.

In February 1924, a small mention in Billboard stated that Macauley’s had been sold to John and Isaac Starks, local capitalists. While it commented that the oldest theater in the city would “continue under the same policy, playing road shows and stock attractions,” Macauley’s was suddenly on borrowed time. Its last show was “The Naughty Wife” on August 29, 1925, and demolition began immediately to clear the block for the Starks building expansion. By December, Macauley’s was gone.

It was announced shortly after the theater was razed that Colonel John T. Macauley’s theatrical photograph collection – “probably the finest and largest individual collection in the world”, according to Billboard – would be presented to the University of Louisville. Many of these images of early actors, actresses, and performances can be viewed online here, with their legacies continued in public memory.

As far as keeping long-gone theaters in mind, Barney Macauley was eloquently quoted on opening night in 1873 as saying: “[The] record of a theatre is not history; it is romance. I hope this one will end in romance.”

[Top image of Macauley’s Theater after construction of the Starks Building in 1913 courtesy UL Archives – Reference.]