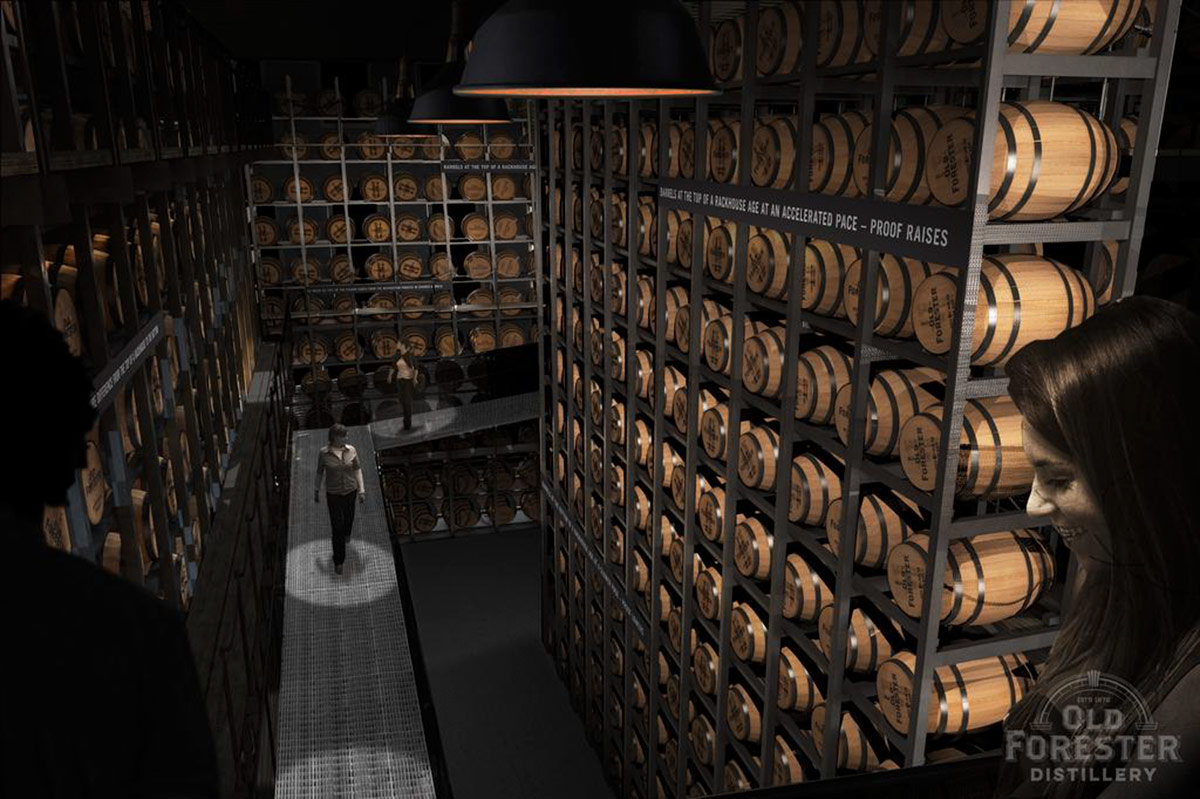 The inside of a freshly charred oak barrel must be a dark and moody place. It’s within these grey, crackled walls, a clear spirit is imbued with a golden tone as it slowly ages to become fine bourbon. In a similar way, new renderings released this week of the $45 million Old Forester distillery and bourbon experience, to be built inside a series of old bourbon warehouses on Louisville’s Whiskey Row, show a space that emits its own sense of dark sophistication. Scheduled to open in late 2017, the distillery at 117–119 West Main Street will produce 100,000 cases of Old Forester each year, making this facility not just a tourist attraction, but a bustling industrial endeavor. The distillery will cover some 55,000 square feet and will house a welcome area, fermentation room, cooperage, tasting room, and bottling line, depicted in the renderings here. Louisville-based architecture firm Bravura was tapped as the design firm when the project was announced in September 2014.

The visitors center features dark and moody spaces with educational displays and cases showcasing the history of Old Forester. On one side, the space is punctuated by an atrium barreling operation, providing hints of the industrial operation inside the structure. A variety of woods and exposed brick bring a warm texture to the spaces.

A tasting room is shown wrapped in what looks like reclaimed wood with a modern ring light fixture suspended over a sleek table. This juxtaposition of old and new, rough and smooth aesthetics repeats itself throughout the space.

Inside the cooperage, barrels are pieces together from individual staves in a process that appears to take on the quality of performance art. Finishing the barrel-making process, visitors can press a large red button triggering an inferno that gives each barrel its distinctive char. Inside the fermenting room, pinpoint lights spotlight the bubbling mixture housed in what appear as sleek stainless steel vats. The room is otherwise dark, further highlighting the focal point of the facility. On a side wall, renderings depict a limestone wall etched with a diagram of the fermentation process.

Once the young bourbon is ready for aging, barrel upon barrel are stacked in a Piranesian rick house (pictured at top) through which catwalks ramp and twist, giving a unique view into the bourbon making process. A bottling plant brings a more streamlined industrial feel to the space, trading the dark woods and moody lighting for utilitarian low ceilings, traditional machinery, and a blue cast. Visitors walk past an assembly line operation where bottles of Old Forester are bottled, labeled, and boxed. The bourbon is finally ready for sipping.

According to Brown Forman, Old Forester is “the longest, continuously distilled bourbon produced before, during and after prohibition by the same family.” The Main Street distillery is expected to open in late 2017. Next door, 111 Whiskey Row, a mixed use development occupying three more old warehouses, continues construction. That project literally was charred last year following a dramatic fire.