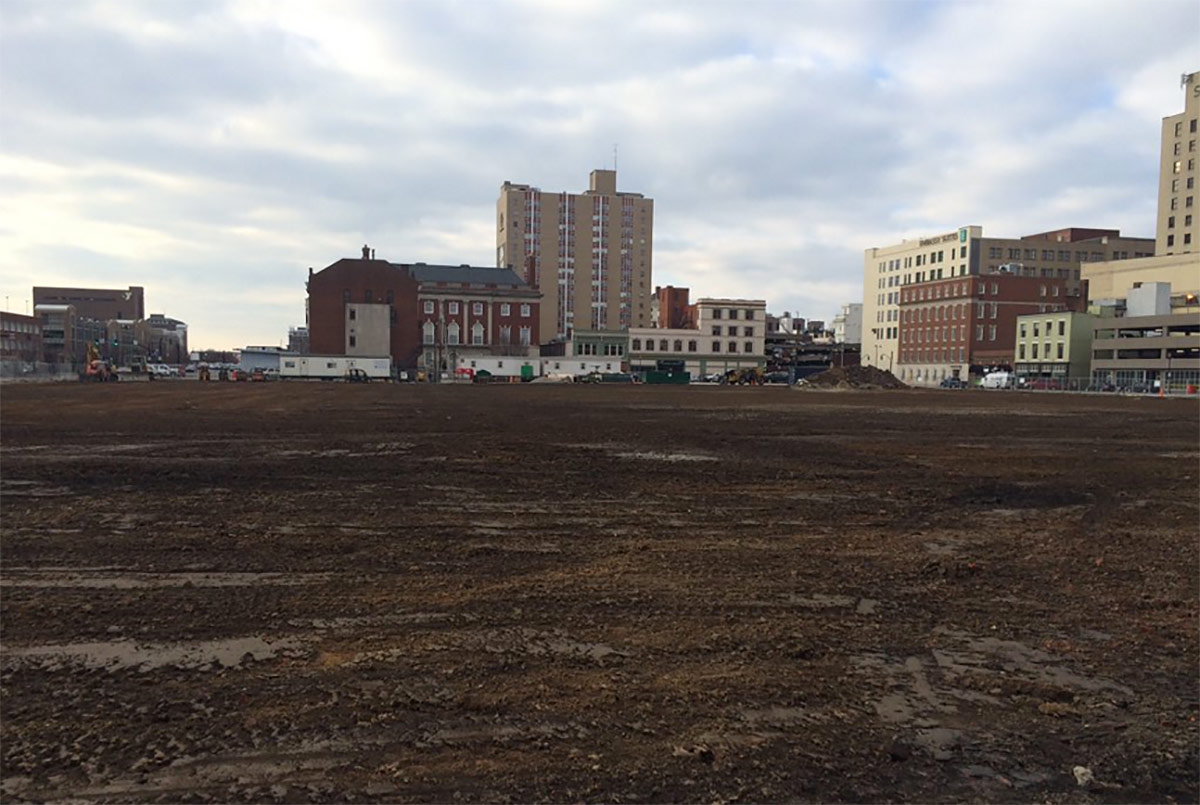 Downtown Louisville’s Omni Hotel & Residences—now called the Omni Louisville Hotel—is officially underway. The mega-project held a ceremonial groundbreaking at the corner of Second Street and Liberty Street where crowds packed a tent in the oversized dirt block that’s about to become the city’s largest construction site.

On hand were Mike Deitemeyer, president of Omni Hotels & Resorts; Louisville Mayor Greg Fischer; a cadre of Metro Council members; and heads from the Louisville Convention & Visitors Bureau and the Louisville Downtown Partnership.

The public-private-partnership will bring 612 hotel rooms, 225 luxury apartments, a smattering of retail, and 70,000 square feet of ballrooms and meeting space all wrapped up in a large podium and 30-story tower. The project is laying claim to the title of the tallest hotel in Louisville.

A block north, the Kentucky International Convention Center is about to undergo a $180 million expansion, that, combined with the Omni, is expected to keep the city competitive in an arms race of meeting space between the likes of Indianapolis, Nashville, and others.

The Omni’s retail components include Bob’s Steak & Chop House, a three-meal-a-day restaurant, a speakeasy with a bowling alley off the alley, a lobby lounge, a rooftop pool with a bar & grill, and the infamous “dynamic, modern urban lifestyle market.” Other hotel amenities include a fitness center, Mokara spa, and a lobby art gallery.

The structure was designed by the hospitality division of Texas-based HKS Architects and interiors are the work of Dallas’ waldrop + nichols studio. Birmingham, Ala.–based Brasfield & Gorrie is serving as the project’s general contractor.

While the exterior of the project has not significantly changed since it was approved by the Downtown Development Review Overlay (DDRO) committee last summer, we now have a much clearer idea of what the project’s interiors will look like.

Inside, the lobby features a spectacular barrel arch vault that call to mind the work of noted Japanese architect Shigeru Ban while dually referencing an artful arrangement of bourbon barrel staves. The interior spaces offer a sort of moody modern aesthetic, including dark colors, sumptuous textures, and warm lighting. In one lobby seating area, a screen vaguely reminiscent of a Harry Bertoia screen in New York City creates a porous division of space.

Inside the guest rooms, the design takes a more conventional turn, with sedate crown moldings, amber hues, and plenty of stone. Renderings depict spaces meant to feel luxurious for those visiting the hotel.

The development’s main contribution to the city’s urban design is a redefinition of Liberty Street as a major pedestrian thoroughfare. Because the main entrance faces Second with a side entrance off Liberty, many a hotel guest will use this route as a passageway to and from the convention center.

The Omni sought and received special permission from the Board of Zoning Adjustments (BOZA) to set the building back from the property line at Liberty to create a wider pedestrian space that accommodates outdoor dining, wide sidewalks, wooden block benches, and a double row of trees.

The other side of Liberty where the Marriott Hotel resides, will not be nearly as nice as the hotel’s blank wall is punctuated only by an enormous loading dock and entrance to an underground parking garage.

Construction will begin immediately and the Omni Louisville Hotel is expected to open in early 2018. The company said this is its first project in Kentucky and that it will create 320 permanent jobs. Louisville’s Omni is hoping to achieve a LEED Silver certification for sustainable architecture.

The project budget now stands at $289 million, according to a press release, with Omni paying $150 million (52 percent) and the city and state covering the remaining $139 million (48 percent). The public component includes tax rebates, $17 million for the Third Street–killing parking garage, and an entire block of land valued at $17 million. The Parking Authority of River City (PARC) is responsible for the 820-car garage.

The fate of the southern third of the block containing the historic Oddfellows Hall remains uncertain. According to Sheldon Shafer’s report in the Courier-Journal, Omni has no long-term plans for the site and no plans to demolish the structures that remain there. A parking lot on the southwest corner will serve as the staging grounds for the Omni Louisville Hotel. Once construction is complete, Omni is required to make that area a grassy open space until final plans are developed. The company said it might set up a sales office and model hotel room inside the Oddfellows Hall this summer.

Today’s groundbreaking event wasn’t without some controversy. The group Citizens of Louisville Organized and United Together, or CLOUT, used the occasion to protest in favor of affordable housing in the city. The group is asking for steady funding for Louisville’s Affordable Housing Trust Fund. Read more about the protests from Philip Bailey at the Courier Journal or from Caitlin Bowling at Insider Louisville.

But today was ultimately a day for project backers to tout their progress, and they certainly did so. Holding true to his long-standing description of the project, Mayor Fischer continued to label the project as “transformational.” The mayor has been known to use the adjective on every occasion when speaking about the Omni. “Today’s groundbreaking is symbolic of the future transformation of our city and the prosperity yet to come,” he said at the groundbreaking.

“Today was much more than just breaking ground on the Omni Louisville Hotel,” the mayor said. And he’s right. This is a large project that will shine a focus on what’s happening Downtown. In the end after much debate, discussion, and learning, it will be exciting to watch as the Omni Louisville Hotel as it rises into the skyline and pushes development energy into the Second Street corridor.