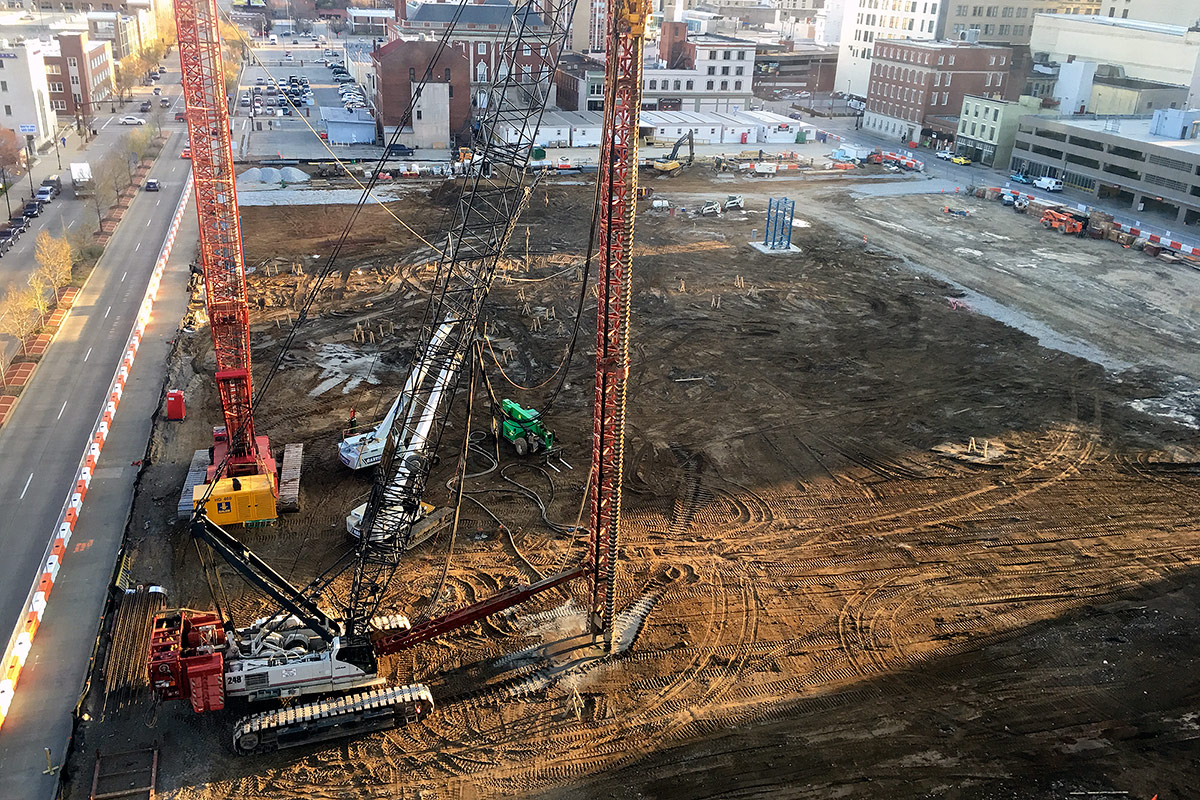 A tipster sent in these photos showing the first construction machinery at the site. While what we’re likely seeing here is still preliminary work, it’s much more exciting than grading a flat lot. Those machines in the foreground are most likely making test borings to ensure the engineering documents that will eventually guide construction are on the right path.

In the distance, on the southern third of the site that won’t be occupied by the Omni Louisville Hotel and its enormous parking garage, a veritable city of construction offices have popped up on a former parking lot. That area is serving as the staging grounds for construction. Once the Omni is complete, the development agreement stipulates that area must be converted into a grassy open space until Omni decides on its second phase development plans.

Perhaps the most interesting observation in these photos is a bit of blue steel rising from a concrete pad in the center of the block. While it looks tiny in the photos, it’s rather large in real life based on the size of those machines parked behind it.

Could that be the beginnings of a tower crane? Time will certainly tell.

UPDATE: 11:30a.m.: Yes, that certainly was the beginnings of a tower crane. And, as a matter of fact, it’s now completely built and, ahem, towering over Downtown Louisville. Thanks to another tipster for sending in this updated view.

It’s not all rosy news at the Omni Louisville Hotel construction site. If you look around the perimeter, you can see there are no pedestrian accommodations for this very intrusive construction project, at least as far as we can see here along Second and Third streets.

Louisville has routinely given pedestrians the short end of the stick around construction sites, not just causing major inconveniences that would never be burdened on motorists, but also creating potentially dangerous situations where people could get hurt.

For a project like this that will cover a major block with construction for several years, it’s important to make sure people—and safety—come first.

If you’d like to be among the ranks of the growing Broken Sidewalk tipster pool, send your photos, tips, or anything else you might overhear to tips@brokensidewalk.com or click Submit a Tip at the top of this page.