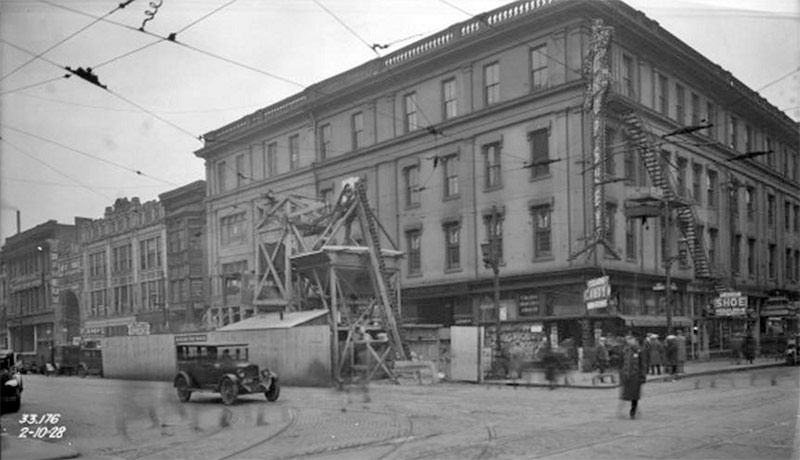 (Editor’s Note: As part of Preservation Month 2016, Broken Sidewalk is highlighting some of the most storied theaters of Louisville in an ongoing Focus on Preservation series.)

A tiny article on the last page of the December 25, 1909, issue of Variety magazine mentioned construction of “a building, which will give Louisville the finest picture house in the south.” That theater was called the Orpheum and it once stood proud on the 300 block of West Jefferson Street.

Plans called for completion of the theater by March 1, 1910, with an approximate cost of $50,000 and operation by the Princess Amusement Company. The 500-seat Orpheum opened to great fanfare later in 1910.

The November 1910 issue of The Nickelodeon magazine contained a page-and-a-half spread for the Orpheum Theater, calling it “one of the most up-to-date picture show houses south of the Ohio river.”

Day and night, illustrations show the theater’s stunning facade of marble and intricate stucco work, making it “literally impossible for one to pass by without noticing the pretty little playhouse.” The exterior contained 1,200 ten-watt tungsten lamps, carefully placed to produce “the most brilliant lighting effect that is possible.” That 1910 article also described the interior colors (terra cotta and gold), pitch of the amphitheater (six feet), safe construction materials (fireproof concrete), and number of emergency exits (five). A four-person orchestra provided music, and one person produced sound effects; he had “nothing else to do but to produce a satisfactory aural effect in conjunction with the pictures.”

The Orpheum and the Casino, another picture house run by the Princess Amusement Company, catered to ladies and children by showing the standard productions of the day: historic, dramatic, and comic. A 1914 advertisement in the Kentucky Irish American newspaper proclaimed “First Run Films Our Motto!” Princess also operated the Columbia (moving pictures), Hopkins (“high-class” vaudeville and pictures), and Gayety (vaudeville and pictures in the summer) theaters.

As many historic theaters go, however, time was not so kind to the Orpheum. By the 1940s, the theater’s decorative facade, tungsten lamps, and beautiful cornice details had been scrubbed away. The graceful statues and electric sign are also missing.

Had these fine architectural details been covered up with a facade or removed for some other reason? Are the light bulbs still there? Posters advertise “Valley of the Giants” and “Roy Rogers Wall Street Cowboy,” films released in 1938 and 1939, respectively. It was still showing relatively recent movies, but perhaps growing closer to its later name change.

City directories list the theater—called the Rodeo Theater later in life—still in operation into the 1960s.

A commenter on the Cinema Treasures site stated that in 1965, it was a “real dive” with low admission prices, catering mostly to men, but showing fairly recent films. The same commenter mentioned last attending the theater in January 1967. In a drawing of the block by Courier-Journal staff artist Bill Fischer, the Rodeo appears as a glaring blank slate in 1967, the vacant facade more obvious than not.

John Kleber’s Encyclopedia of Louisville described this south side of Jefferson Street as the Thompson Block, a “small enclave of bohemian culture in downtown Louisville from the late 1930s until the early 1960s,” with restaurants, cafes, offices, and used-book stores.

Unfortunately, urban renewal in the 1960s and 1970s claimed many historic buildings in cities nationwide—and Louisville was no exception. In 1974, the Tyler Block on the north side of Jefferson was razed for construction of the convention center. The south side of Jefferson, including the Rodeo, was quietly cleared around this time to build the Hyatt Regency Hotel, which is still in operation today.