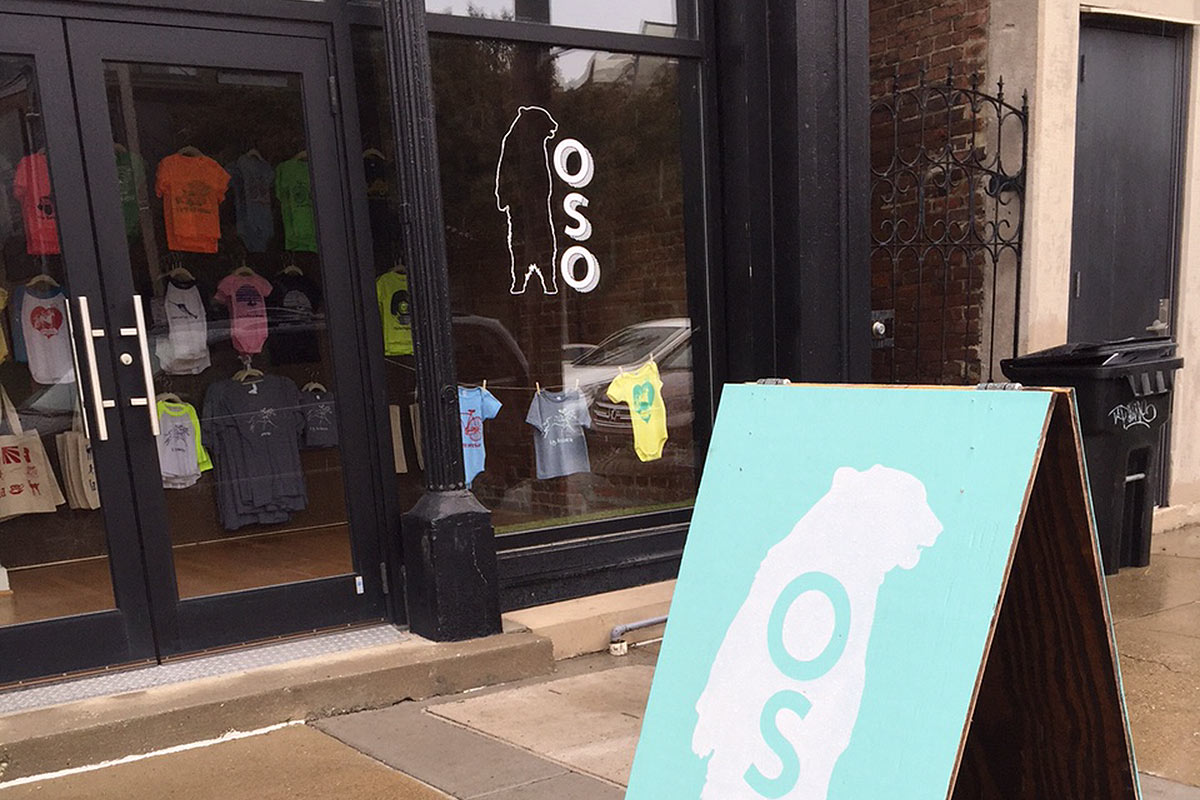 Is a neighborhood all grown up once it has a children’s store? Nulu now boasts a pop-up style kids boutique with hip t-shirts and onesies themed around Louisville neighborhoods.

“We were wanting to open to make sure we had a presence for all the people who might be traveling in for Derby,” she added. “This time of year, knowing that there will be crowds on Market Street.”

The designs in the store today are the work of Edmonds, Washington–based graphic designer Anne-Lise Hurn. The collection includes screen-printed t-shirts, onesies, a tote bag, and one shirt for adults.

“The idea was neighborhoods,” Tower said. “We wanted to feature different neighborhoods in Louisville and some local places.” But the collection goes beyond the traditional places in Louisville you might imagine. “We wanted something playful since it is geared toward children,” she said. “We went with this theme of the alphabet with the first collection. One shirt is an old airplane and says ‘B is for Bowman Field’.” Other shirts read “D is for Dixie Highway”, “N is for Nulu”, and “P is for Portland.”

“She’s [Anne-Lise Hurn] not local, but we have other people in mind we want to start carrying once we get going,” Tower said. “The hope is to get more local artists and designers involved.” And Tower’s own designs will also be featured later this summer.

Tower has a passion for sewing and textiles that began as a little girl when she would sew with her grandmother. She later majored in theater and ballet costuming and moved to San Francisco where she worked in bridal design. After switching gears, moving back to her hometown Louisville, and getting her masters in teaching, and becoming a third-grade teacher, Tower continues to sew for private clients.

“The hope is we’ll open the shop and in the summer we’ll release more of the items I make for kids,” she said. “I plan to have one of my sewing machines in the shop.”

Tower has been watching Nulu transform into its current state over the past eight or so years as her husband, Peter Tower, worked at the Magnolia Photo Booth Company. Eight years ago, Nulu wasn’t yet Nulu, the street was dominated by vacant property and the Wayside Christian Mission, and only a handful of businesses like Red Tree boutique and Magnolia had set up shop.

Magnolia has initially been located on the south side of Market Street but moved to the north side of the street when space became available. “Around that time, that’s when Nulu really started picking up with Please & Thank You and other boutiques,” she said.

“There’s definitely been a spike in restaurants and boutiques and shops, “Tower added. She said opening Oso was a logical next step for the neighborhood. “We felt this was something lacking in Nulu and in Louisville in general. There are baby shops, but this is different.”

Plus, Emily and Peter have their own personal connection for opening the shop: they have a one-year-old, Margot. “That was the excitement on our end personally.”