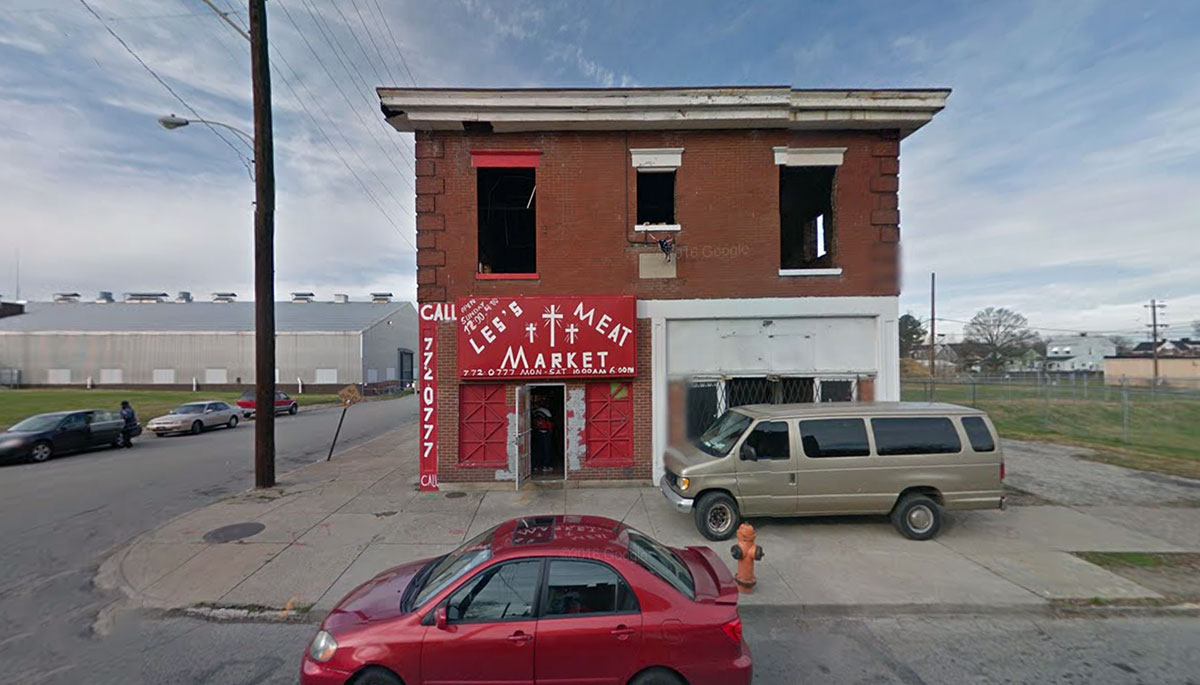 Tragedy struck the Parkland neighborhood Friday afternoon when the facade of a historic two-story building collapsed, trapping and killing one person who was working on the structure. The building was located at 28th Street and Grand Avenue.

Work was being done illegally to the building according to files released by Metro Louisville, and the property was the subject of multiple stop work orders and violations within the past several years. Reading through the long list of violations, accumulated from several city agencies, it’s a wonder the building remained standing this long.

John Dozier, 71, was killed during the collapse. His body was found “pinned between a large beam and a metal drum” beneath a pile of brick rubble, according to WLKY. WDRB reported that Dozier was working on the building for its owner. A smaller, secondary collapse complicated the recovery effort, according to a followup from WLKY.

“A lot of people in the community have had serious concerns about the safety of that building over the past several years,” Jerald Muhammad, a family friend of the victim, told WDRB in a followup article. Dozier was sent to the emergency room while working on the building two years ago when he fell through the floor.

Joseph Coleman told the Courier-Journal he previously worked part time on the building’s brick facade, but quit because he felt the building was unsafe. Randy Skeens, who worked at Les’s Meat Market on the structure’s ground floor, had just left the building and witnessed the collapse.

The structure is actually the old Parkland Masonic Hall, dating to 1916, according to a stone piece once set in the facade. The hall would have been entered along the Grand Avenue entrance. An ornate stained glass window with Masonic insignia marked the spot. In the front were two storefronts set off by a cast-iron facade. The Greek patterning of the windows seen in Les’s Meat Market were not original. The original storefronts were symmetric and contained a recessed front door, typical of many retail structures of the era.

The structure, 1064–1066 South 28th Street, is listed as owned by Hama, LLC, which, according to the Kentucky Secretary of State, is an inactive organization that was dissolved in 2013 after not filing its annual report. Other city documents refer to Dwight Sweeney of Virginia Avenue a few blocks from the 28th Street structure as the building owner and person behind the LLC.

Despite large amounts of work done to the building in recent years, no building permits had been issued for the structure in the past five years. The latest permits issued to the property are dated 2011. The last of those permits is dated July 14, 2011, when Develop Louisville issued an electrical permit (303166) to Collins Electric of Kentucky for emergency repair work on the building valued at $1,000. Other permits going back to February of that year covered installation of refrigerator units for meat and general tenant fit up for Les’s Meat Market, then known simply as The Meat Store.

Trouble with the building appears to have begun in earnest in 2014 shortly after it apparently went into foreclosure. Inspectors made repeated and frequent visits to the structure over the following two years. Inspectors from various city agencies regularly spoke with Elias “Les” Estephane, owner of Les’s Meat Market, about problems with the property. Many of the violations revolved around his business.

One story remains constant throughout that time: Estephane repeatedly told inspectors he was on the verge of purchasing the property and would repair the violations once the sale went through. He stuck with that story for two years, and inspectors duly noted it in reports each time.

The first log of the impending sale dated to May 29, 2014. By then, a barber shop in the building called Brand Nu Kuts and later the 28th Street Barber Shop had closed. Estephane told inspectors that the previous owner, Sweeney, lost the building in a foreclosure auction, but had a buy-back option with 12 percent interest with the new owner. Estephane also stated that “he has worked out deal to buy entire building for 50K [sic] and will renovate entire building at that time,” according to the inspector’s notes.

By September 11, 2014, Estephane had a date for the sale to be completed. He told inspectors he was still planning to purchase the building and expected the sale to go through in December. That report stated: “Owner Mr. Sweeney lost building at foreclosure auction to a Mr. James Stanford. December 1 will mark one year since this happened. Mr. Sweeney had that one year to buy back the building if he could come up with what is owned [sic]. Les says this will not happen and that he has already made a pending deal with current owner.”

On November 4, 2015, inspectors noted that the building was missing shingles and work was taking place on the second floor. That work would have been going on without a permit.

An inspection report dated January 28, 2016, revealed that Les’s Meat Market was using an open wood fire inside the building for heat causing smoke to fill the building. “Fire Marshal instructed owner to eliminate any further indoor fires,” the report states. The following day, a letter from the Fire Marshal about the fire also instructed the owner to “Discontinue demolition of the building. A permit from Metro Louisville Codes and Regulations must be obtained before any work can be continued.”

And the work taking place at this time certainly appears to be more demolition than anything else. Massive quantities of brick had been removed and stacked, window openings were left open to the elements, holes were visible in the walls, the barber shop’s storefront had been entirely removed, and a large number of floor boards had been removed from the back of the first floor.

Apparently the December sale didn’t go through and Sweeney’s Hama, LLC was again the owner, but Estephane was still imminently prepared to purchase the building. On January 29, 2016, Estephane told inspectors that he was now in the process of purchasing the building from Hama, LLC. “Les is buying the property,” an inspection report states. “He has paid the listed owner 8 payments and says that he has 4 more. He is working on the building and loves it. He said that he will continue to work on it.”

Four months later, nothing had changed. “Spoke to owner Les during today’s visit,” a Complaint Investigation Report to Les’s Meat Market dated May 17, 2016, states. “Les advised that he is purchasing the building and is having the roof and outer openings repaired.” While cardboard and debris had been hauled away at the request of the city, the inspector noted that “walls, floors, and ceilings in need of repair is (sic) some places, however, no critical violations apparent today as a result of work in progress for remodel / repair.”

Estephane’s purchase was also noted in another May 17 report in which he said he expected paperwork to be complete by May 20. “[H]e stated that once the purchase is official he has contractors lined up to start work on the roof and work from there down on the property,” an inspection report states. “[O]nce the roof work is complete he has masons lined up for wall and window work.” Estephane told the inspector the goal was to bring it back to its original 1910 design.

On a follow-up visit on May 20, an order was issued to seal up the outer openings of the building with a deadline of June 20. Photos dated July 19 show the building as an active construction site. Flooring is missing from the second floor, windows are improperly sealed with only a sheet of plastic film, and a storefront is open to the elements.

On May 24, a civil penalty of 1,005.17 was applied to the property in the form of a lien. Then on June 6, Estaphane told an inspector that the building sale “still hasn’t gone through at this time due to a previous lien but it is being worked on.”

Meanwhile, the building continued to deteriorate. On June 9, an inspection report noted that the structure’s brick walls showed deteriorated mortar joints and loose bricks. Other problems included: the structure’s cornice needed to be sealed up and holes patched, hardware added to doors, a proper drainage system installed, and a deteriorated and damaged roof.

The list went on, including an issue with the Meat Market’s choice of street furniture: “Only exterior designed furniture is permitted for outdoor use (car seats not permitted).” It gave a deadline of June 17 to fix the violations.

On July 25, three days after the collapse and eventual demolition of the structure, Develop Louisville sent Hama, LLC, a final violation notice with the following comment: “Windows, doors, and framing have been removed, alterations of a commercial structure without approved plan and building permit. Stop work immediately and obtain proper permits.”

Following the collapse, inspectors were again on the scene evaluating the rest of the structure. “We have Metro Government’s building inspectors on site, structural engineers to help us assess the structural stability of what remains of the building,” Fire chief Sal Melendez told WDRB news Friday. Firefighters sought an emergency demolition order and brought down the rest of the building Friday.

No official cause of the collapse has been released. The events surrounding the year’s long illegal renovation and the predictable slow and steady deterioration they helped cause certainly did not help the situation. From the long list of violations and the seemingly out of control renovation moves, this tragedy has been unfolding for several years, building to the final collapse. There must be a more effective way to handle such slow-motion events before they end up in potentially fatal rubble in the street.

Building collapse at 28th and Grand in West Louisville.#courierjournal pic.twitter.com/ExRjUEWK1G

Photo of partial building collapse at 28th and Grand Ave. in #Louisville via @KVanoverWAVE3 pic.twitter.com/wmXbvj0ePb