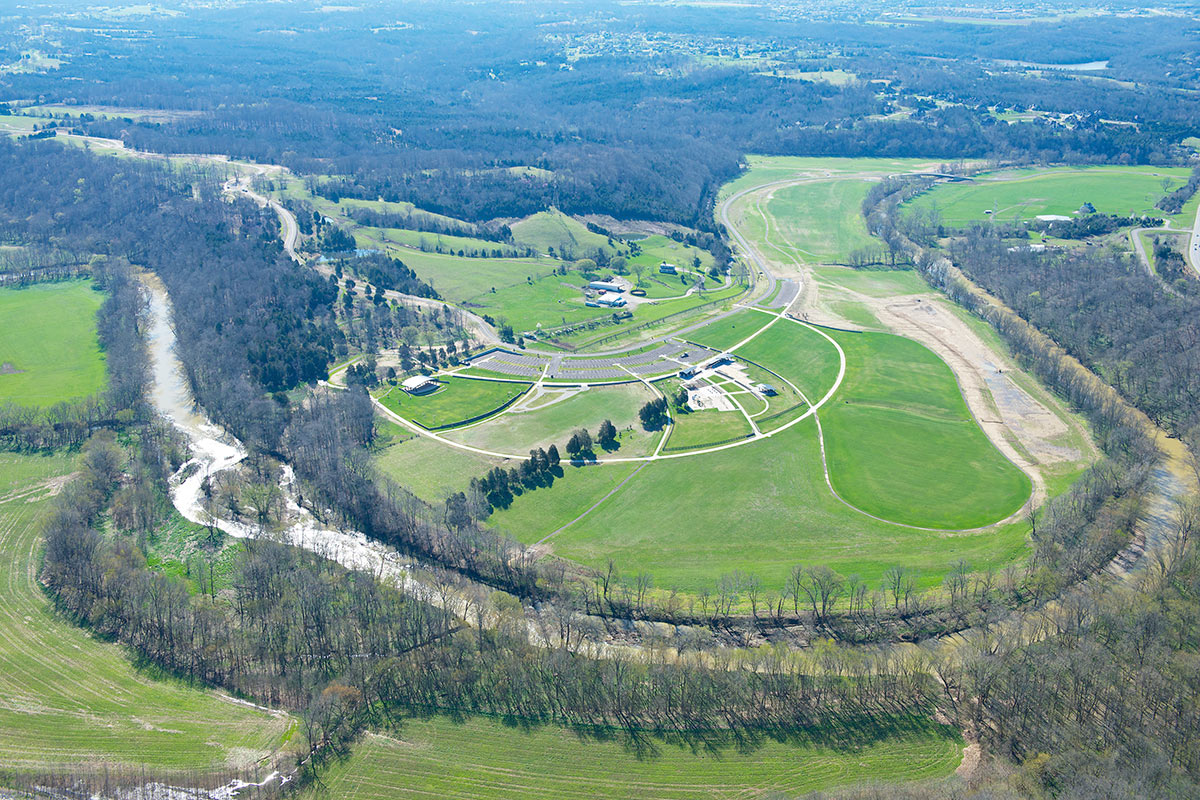 “Unabashedly urban” is an unusual portrayal of the drive out to the Beckley Creek portion of The Parklands of Floyds Fork, nearly 17 miles from downtown on the edge of eastern Jefferson County. Yet that’s how Scott Martin, parks director at 21st Century Parks, the group behind the Parklands, described the project to Broken Sidewalk in an interview last year. Beckley Creek has no public transportation access, its surrounding census tracts are among the least dense in the city, and the rugged and rural terrain surrounding it is some of the wildest in Louisville. Martin likened visiting the park to being “dropped off in Yellowstone.”

However curious the characterization, “urban” is what the forces behind the new parks system are calling the area they seek to further develop. That’s because they have the ambitious goal of not only creating and preserving thousands of acres of pastoral public space, but shaping entire communities and neighborhoods that will surround it. In the way Louisville’s Olmsted parks created some of the city’s most charming urban neighborhoods, 21st Century Parks, as the name implies, sees itself as a modern expression of this tradition.

On April 15th, the Parklands of Floyds Fork was completed—just five years after construction began. And while the completion of this project signifies the permanent transformation of this space into a protected, world-class park system, its ancillary impact on long-term regional development is only beginning to come into focus. What’s materializing is anarchic sprawl born from contradictory land use regulations and virtually non-existent city planning. If the Parklands is to have the same positive impact on the urban fabric of Louisville as Olmsted’s parks did, we need a roadmap to take us there.

Floyds Fork is a 62 mile tributary of the Salt River and the county’s largest watershed. It’s home to bass, bluegill, catfish, and the old Grosscurth Distillery, which blew up in 1968. Historically, eastern Jefferson County was agricultural, and there was never a planning framework in place to guide development. In the 1980s, when the Gene Snyder Freeway began encircling the city, the newly accessible rural east end experienced a population boom and became home to sprawling subdivisions like Lake Forest.

Overdevelopment near Floyds Fork quickly became a concern, and in the early 1990s, the Future Fund, a private land trust, was created to buy up properties abutting the Floyds Fork waterway and shield it from suburban sprawl. In 2003, when 21st Century Parks was created, they teamed up with the Future Fund, and working collectively, managed to permanently protect nearly 4,000 acres of land along Floyds Fork. (The Future Fund owns additional acreage that it protects that is not part of the Parklands project.)

These 4,000 acres comprise the Parklands of Floyds Fork, and are distributed throughout its four public parks, all connected by a central parkway. Without the Parklands, the forests and countryside it protects, including dramatic limestone ridges and cliffs along Floyds Fork, would likely have been developed into suburban tract housing. Instead, the Parklands has provided precious public space for a populous slice of Louisville that has practically none. But in doing so, the project has diverged from its Olmstedian blueprint.

At first blush, the premise that the Parklands are neo-Olmstedian is reasonable. Like Floyds Fork, Cherokee, Iroquois, and Shawnee Parks were designed as suburban landscapes, built on the outskirts of Louisville at the end of the 19th century. These parks were intended to open up the city to create a healthier environment for its residents.

But unlike today, Olmsted’s Louisville was ultra-dense, with development centered around downtown and its immediate surroundings. As ribbons were being cut at the big three Olmsted parks, the country was just wrapping up 50 years of breakneck population growth. During the last half of the 19th century the United States tripled in population and the rail system had grown to almost 300,000 miles—up from just 3,000 in 1840. Cherokee Park and Louisville’s Union Station—then, the largest train station in the South—were both opened in 1891.

Louisville experienced a population boom in the early to mid-20th century—55 percent growth from 1900 to 1940—and these parks became enveloped by neighborhoods and were quickly absorbed into the expanding city. During that period, cars were only beginning to emerge on the city scene and dense, walkable development routed along streetcar lines was still the norm. These were suburbs in the same way the Upper West Side was when Central Park was built.

Beautiful neighborhoods such as Beechmont and the Highlands were created through thoughtful planning and forecasting, in contrast to the haphazard and laissez-faire approach to current development. For instance, in 2008, the firm that designed the Parklands, Philadelphia-based Wallace Roberts & Todd, were commissioned by the city to develop a planning document to guide development surrounding the park, as Marcus Green from WDRB points out. The Floyds Fork Area Study, A Framework For Growth (FFAS) envisions residential development west of the park that’s served by dense, pedestrian friendly, mixed-use regional, town and village centers. Development to the east of the park should be “low-impact”. But the plan was never approved.

Instead, the area is currently guided by ambiguous and unenforceable land use codes. The Floyds Fork Development Review Overlay (DRO) was included in the Land Development Code in 1993 to balance development and conservation surrounding the watershed. After 25 years of eastward expansion and the introduction of a famous park system, striking this balance is more difficult than ever. Adding to that challenge is the inclusion of so called “conservation subdivisions” to the Land Development Code in 2008. The result has been unrestrained exurban sprawl that clearly violates the spirit of the overlay district.

“Conservation subdivisions are the developers’ counter to the DRO”, Dr. Stephen Henry, former Lt. Governor and founder of The Future Fund Land Trust, told Broken Sidewalk. Henry is describing the commonly held view that “conservation subdivisions” were created to allow developers to ignore regulations limiting development near Floyds Fork. One such example is Covington By the Park, a 450 acre, 1400-lot development. In February, James Bruggers of the Courier-Journal reported that after purchasing the land last fall, the developer entered into a timber contract and began clear cutting large swaths of the property, violating the DRO.

Such massive developments have also exacerbated sprawl. Oddly, 21st Century Parks owns a “conservation subdivision”, Oakland Hills, a project that illustrates just how sprawl generates sprawl. The land that contains Oakland Hills is 363 acres; it’s just north of a proposed 26 acre subdivision, and neighbors the new Waterford Ridge and Equinox subdivisions. There’s also an additional 168 acres slated for development to Oakland Hills’s east. When we spoke with Scott Martin last year, he described the Parklands as an “urban edge” project. But last week, he said he’s not so sure about that now, “The edge is now Shelby, Oldham, and Bullitt Counties.”

The Planning Commission is just beginning to realize, eight years later, that these “conservation subdivisions” might be a problem. Marcus Green recently reported that “the Louisville Metro Planning Commission has stopped reviewing “conservation subdivisions” in Jefferson County while it looks into whether regulations approved in 2008 achieve a goal of saving green space.” There’s little question that the regulations have failed—the lack of city planning for one of the most ambitious and significant infrastructure projects in the city’s history is breathtaking.

The Parklands succeeded because there was vision, collaboration, and planning—the same formula that created Olmsted’s parks, Louisville’s great neighborhoods; and it’s the key to building a successful 21st century east Louisville. So it’s alarming that when Broken Sidewalk asked Scott Martin about the Floyds Fork Area Study last week, he said he couldn’t speak to it because that process “operated in its own silo.” That’s not how great cities are built, and Louisville and the Parklands of Floyds Fork deserve better.

We’ve reached a pivotal juncture: the Planning Commission is taking a breath to reconsider the paradoxical “conservation subdivision”; the Parklands is complete, and there’s renewed interest in the Floyds Fork Area Study. This moment requires leadership and vision. Inaction would mean 1980s-style city planning pushes Louisville’s edge farther into Shelby and Bullitt Counties, and the Parklands of Floyds Fork remains unabashedly exurban.