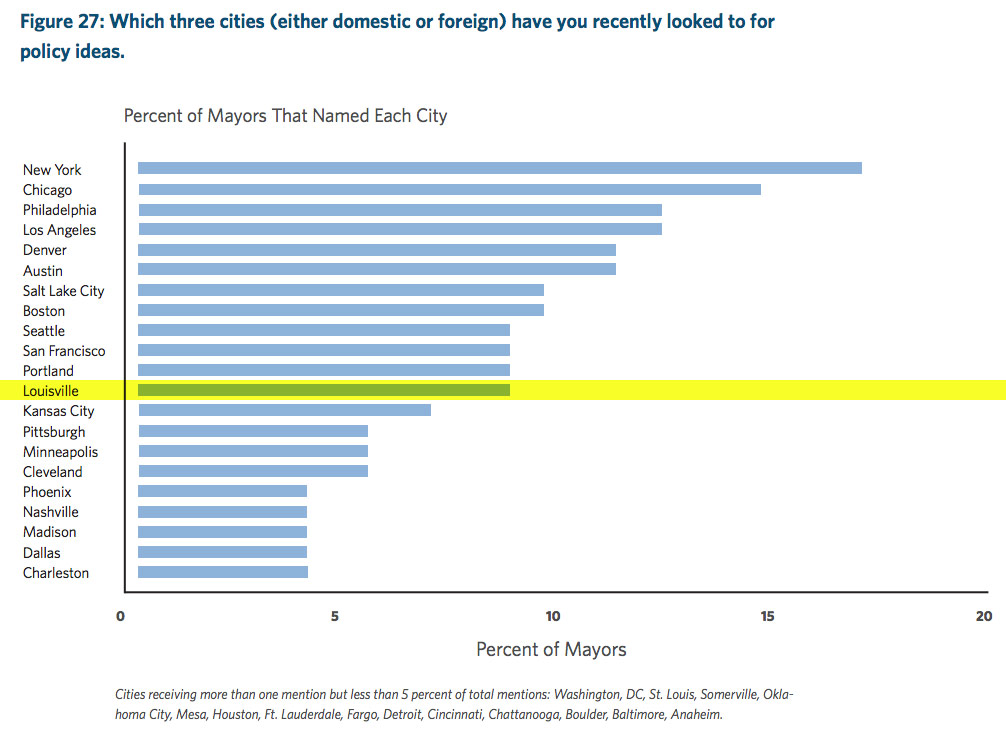 Louisville is one inspirational place. And new data from the 2015 Menino Survey of Mayors compiled by Boston University’s Initiative on Cities proves it. The report was released this week by the U.S. Conference of Mayors and includes survey results from mayors in 89 cities, both big and small.

The survey asked mayors to list cities where they look for inspiration. Some of the best ideas are recycled or outright stolen, after all.

“Mayors obtain policy ideas from a wide variety of cities,” the report reads. “As in 2014, mayors were asked about the cities from which they have gleaned three recent policy ideas.” The resulting chart, shown above, lists the percentage of mayors who listed each city as a source of inspiration. The survey notes that the chart “depicts every city mentioned more than once and thus excludes a wide array of cities that exactly one mayor mentioned.”

And what do you know, Louisville is in good company, cited as a source of policy inspiration by about nine percent of mayors. It sits alongside Portland, Ore., San Francisco, and Seattle for frequency of mention in the survey. Louisville tops other poster cities like Nashville, Cincinnati, Minneapolis, and Pittsburgh. Mayors in other cities seem to like something we’re going here. “Mayors are generally drawn by best practices and success stories in specific policy areas,” the report notes. “The most commonly cited motivation—highlighted by a whopping 68 percent of mayors—was “policy specific.” These mayors believed that their chosen city approached a specific policy area in a way that they perceived to be especially effective or innovative.”