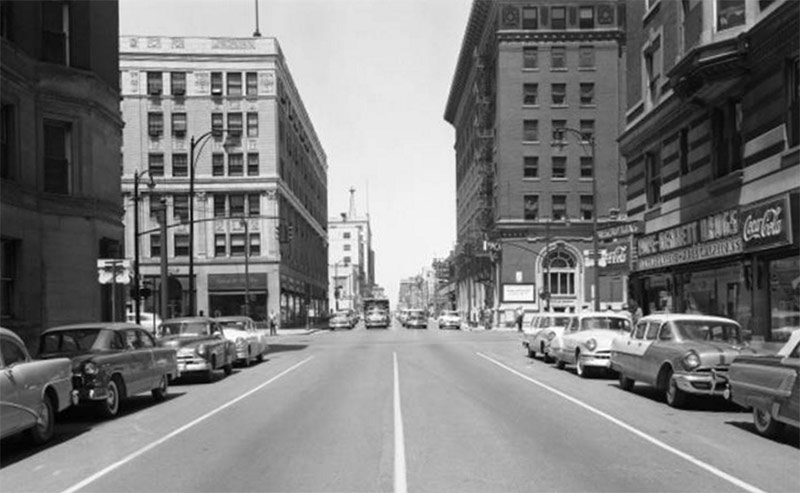 Branden Klayko’s recent article about the Fincastle Building reminded me of many warm feelings, even though I don’t think I have set foot in the building in at least twenty years.

When I was a child, our family’s internist, Dr. George N. Schuhmann, had offices on the fifth floor of the Fincastle Building. I can remember looking out the windows of his waiting room when I was six or seven and clearly being impressed with the two matching Weissinger-Gaulbert Apartment buildings across the street. One of them was torn down not too long afterward.

In those days, the late 1950s, Broadway was at its post–World War II peak, boasting tall buildings, a grand hotel, and one of the city’s top movie palaces where the road-show hits like Around the World in 80 Days, South Pacific, and Ben Hur ran for months at a time.

On the ground floor, the Fincastle had a kind of luncheonette with a counter, sandwiches, Cokes, etc. Besides a polished brass bannister (which may still be there) going down the stairs, what I remember about it was the old-fashioned telephone with a receiver that you held to your ear and the horn you spoke into. If the visit to the doctor went well, we usually got a snack—Hostess cupcakes or something like that.

There was an arcade on the first floor, just like so many other major downtown buildings—the Heyburn, the Starks, and the Commonwealth. These arcades were elegant walks lined with shops, restaurants, druggists, etc. and were standard features.

The Fincastle’s prime commercial tenant must have been The Sign of the Pine Tree, a very elegant interior decorator’s showroom. It had showcase windows facing both Broadway and Third Street. What I loved best about looking into the those windows was the large brass sculpture of a boxer dog, maybe a lab, that, over the years, had turned a rather brownish green.

I don’t think my mother ever took my brother and me into the store. She surely was afraid we would knock something over. But I remember years later, when I got married, we got some lovely gifts from the Sign of the Pine Tree, which had moved to St. Matthews on Chenoweth Lane and was being run by my wife’s cousin, Dace Brown Farrer and her husband, Bruce.

Dr. Schuhmann moved out to the brand-new Medical Arts Building on Eastern Parkway in 1959—the year it opened—which is still a showplace and ought to be on the National Register.

This is an interesting sociological factoid: Many of the doctors in the Medical Arts were Catholic. They practiced at the old St. Joseph Infirmary at Preston Street and Eastern Parkway. In those days, there still was a stratification of medical practice and hospital by religion. Jewish doctors and patients went to Jewish Hospital. Protestant (especially Episcopalian and Presbyterian) doctors were Downtown—often in the Fincastle Building—and practiced at Norton Hospital and later also at Methodist.

In 1979, I switched to Dr. William Blodgett, after Dr. Schuhmann retired. Dr. Blodgett was in the Fincastle, head of the prestigious Fincastle Medical Group, and he was also chief of staff at Norton’s. His firm moved out in the mid-’90s, and I’ve had no occasion, sadly, to return to the building, but it’s great to know it is going to know a new life as apartments.