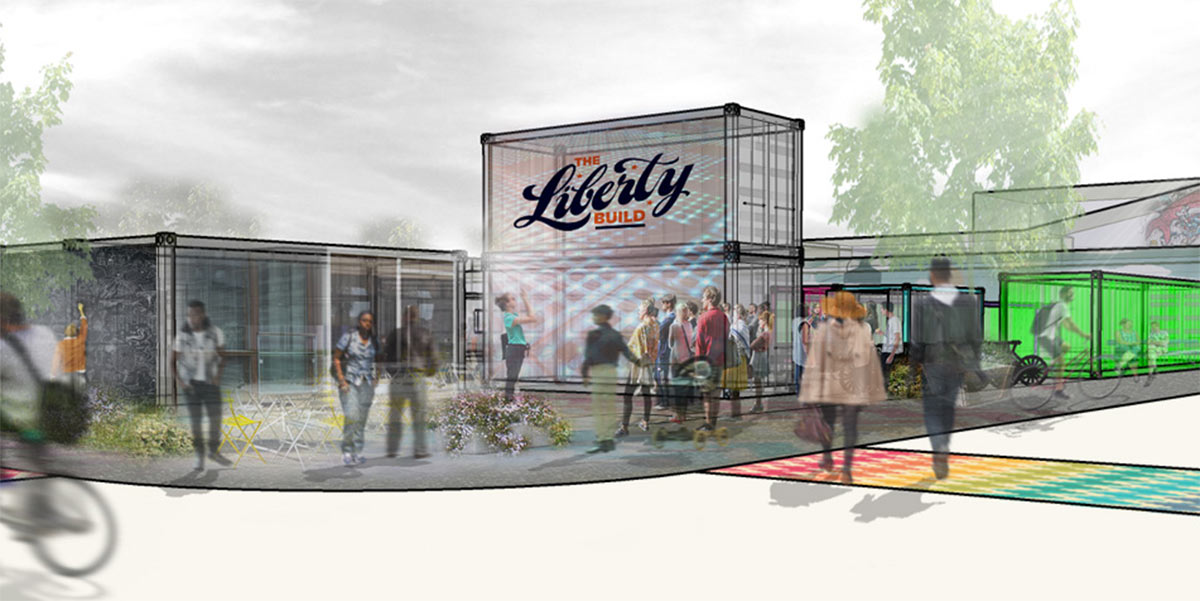 Walk down Shelby Street south from the vibrant main drag of Nulu and it hits you pretty quick: once you’re past Nanny Goat Strut Alley, you’re pretty much in a no-man’s land. The street life dries up off East Market Street and past Jefferson Street, so do any buildings. The entire area is a wide expanse of barren lots creating a palpable chasm between Phoenix Hill, Nulu, and the Medical Center.

But this summer, City Collaborative is bringing ingenuity, shipping containers, and a healthy dose of tactical urbanism to the area with hopes of implanting a civic heart in the center of this otherwise challenging urban landscape. Meet ReSurfaced: The Liberty Build. Scheduled to last 18 months or more—the most ambitious ReSurfaced yet—the Liberty Build will be located on a three-quarter-acre lot on the northwest corner of Liberty Street and Shelby Street that has been vacant since 2003. The project is, above all, a public commons that aims to knit together the three neighborhoods and bring life—for at least three days a week—to a forgotten patch of grass.

“ReSurfaced has always been about exploring creative ways to activate underutilized space,” Patrick Piuma, director of City Collaborative and planner at the Louisville Downtown Partnership, told Broken Sidewalk. “As in past projects, the beer garden and music/art programming will be a part of the upcoming project. However, we wanted to build off of past experiences and look at new components that could not only provide amenities for the local neighborhoods, but also test ideas for other sites around the community.”

The Liberty Street site was chosen specifically for its design challenges as an opportunity to push the achievements of the ReSurfaced program further in terms of creating “a community activation space that fosters civic engagement and entrepreneurialism.” As a public commons, the site hopes to knit together various aspects of food and drink Louisville has come to love from past events with entrepreneurship and new ways of public engagement. That means everything from co-working spaces to makerspaces are on the table. “Having the site for 18 months or more gives us the flexibility to create a framework or platform for civic-minded people to plug-in and explore with us,” Piuma said, “how we creatively utilize these dead spaces in our community.” Because of the complicated site limitations, designing and programming the Liberty Build is crucial. Previous iterations of ReSurfaced featured space-defining elements such as brick walls or sweeping vistas along the Ohio River, but the Liberty Build had to get down to the nitty-gritty of place making on a blank slate. To accomplish this, an armature of shipping containers, some stacked, will form an active perimeter that defines a plaza space. “We have a master conceptual plan for the space that Jeff Rawlins of Architectural Artisans, Louis Johnson and Jared Kaelin of Gresham, Smith & Partners helped develop with us along with input from Jeremy Semones of Core Design and several others,” Piuma said of the Liberty Street site. “The design takes in many variables associated with the local context, the temporary nature of the project, and builds off of our experiences from how a space can become a place by utilizing containers to help define an amorphous lot as we did with ReSurfaced: Three Days at 10th Street event last fall.” The first phase will create a porous armature of shipping containers around site defining a central commons filled with picnic tables. These containers will provide new models of retail space that allow entrepreneurs to experiment with their goods and products, focused primarily on a beer garden concept with food.

The second phase expands the site with a basketball-court-sized soccer pitch—called a Five-A-Side pitch—paved with artificial turf and framed by additional shipping containers (more on that soon). During this phase, an expanded program of co-working and studio space, retail, and a community workshop will also be explored. City Collaborative hopes to build off international connections it made last year with England’s De Montfort University to also include a studio space where students and staff from that school will focus on Education and Health & Wellness in Louisville.

ReSurfaced: The Liberty Build will constantly be changing. Expect to see sustainability, new ideas about retail space, plentiful events, and lots of opportunities for art (Metro Louisville’s Committee on Public Art is a partner) abounding at ReSurfaced: The Liberty Build. Already planned are live-painting events, art installations, and kinetic art displays. Makerspaces LVL1 and FirstBuild will also tinker with how we use public space, helping ReSurfaced to evolve over its 18 month run.

“This project is very much a work in progress,” Piuma stressed, “but the intention is that we create an interesting space that serves as a test bed for our community to explore how we address underutilized space, both in the public and private realm. A place where people can come together with ideas and dialog to address problems and opportunities throughout Louisville.”

The scale and ambition of ReSurfaced: The Liberty Build deservedly put the initiative in the same realm of some of the top shipping-container focused pop-up urbanism projects including the former Dekalb Market in Brooklyn, Brixton Pop in England, and Proxy in San Francisco.

And while today the site surrounding ReSurfaced: The Liberty Build looks like it’s been cleared for urban renewal, the site will some day, years from now, be a vital stretch connecting south from Nulu, which is trying its hardest to break free from its linear commercial corridor past. The Rabbit Hole Distillery will help break that mold, as will Bill Weyland’s renovation of the Louisville Chemical Building and planned hotel over on Hancock Street.

But most significantly, the eastward, privately-developed expansion of Liberty Green will will the north-south Shelby corridor with large-scale apartment buildings, hopefully carefully designed with appropriate retail space and good urbanism that will help bring vitality back to the area.

In the meantime, the area is getting a temporary heart and we can’t wait to see how an infusion of activity here will help the entire area come back to life. See you at the Liberty Build!