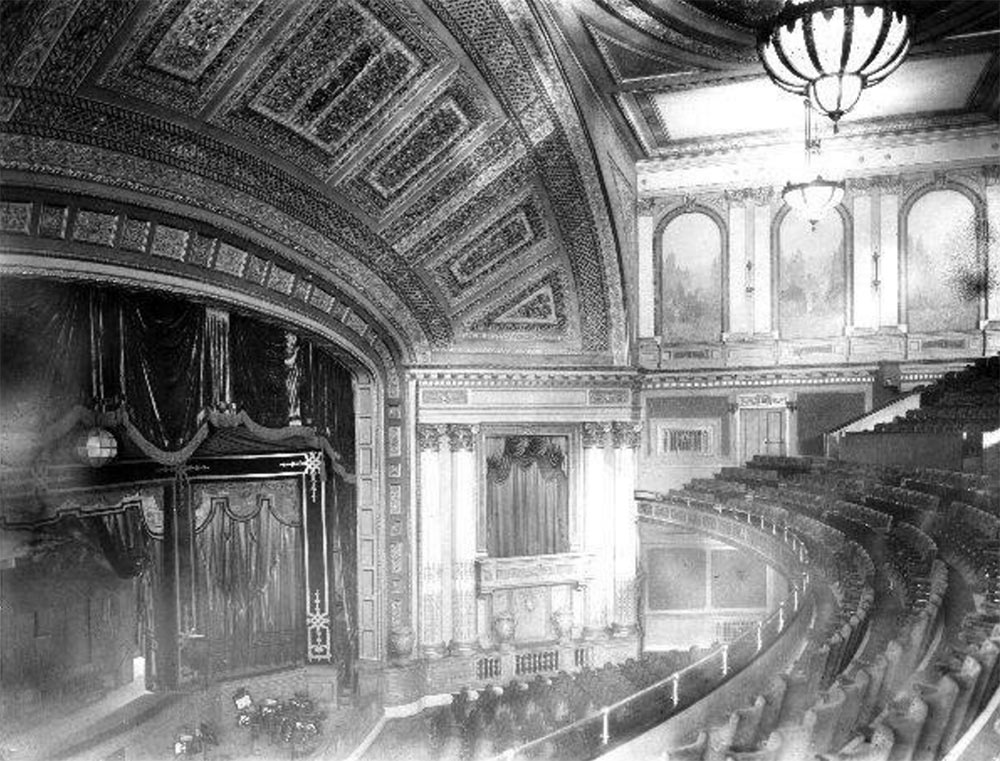 (Editor’s Note: Preservation Month 2016 might be over, but we’re continuing our Focus on Preservation series highlighting some of the most storied theaters of Louisville.)

Built in 1920 by Joseph & Joseph Architects, Louisville’s Rialto Theater was among the most grand ever built in the city. The Capitol Theater in New York City inspired the Rialto Theater, and both functioned as motion picture houses until their respective demolitions. Located on the former site of Cunningham’s Restaurant at 616 South Fourth Street, the Rialto opened to the public on May 12, 1921, and boasted some of the finest architecture in Louisville’s history.

The Rialto would have stood out from Fourth Street’s older buildings because of its gleaming white-glazed terra cotta facade. Terra cotta was a defining material choice for structures built of the era, but the Rialto’s tile was top quality, being sourced from Rookwood Pottery in Cincinnati. Other terra cotta facades still exist to this day—namely, on the Brown Hotel and the Mercury Ballroom (originally the Wright-Taylor Building) situated across the street from the Rialto. (The Seelbach Hotel’s basement Rathskeller is also clad in Rookwood tile.)

Unlike the Capitol Theater, the Rialto featured intricate bas-relief panels between the windows and wrapped along the top of the building, with massive corbels jutted below the roofline. A prominent vertical marquee juts up from the Rialto facade and a recessed entry was flanked by two retail stores.

Upon entering the grand lobby via a vestibule, guests were greeted by chandeliers made of Bohemian crystal, tall brass torchères, and a stunning 26-step marble staircase that led to a grand promenade upstairs. Diamond-shaped marble tile lines the floor and intricate plasterwork and handpainted murals created a visual delight on the ceilings and walls.

With 3,500 seats, the Rialto is easily one of the most grand ever built in the city. And with a cost of one million dollars ($11,906,600 when adjusted for inflation) the Rialto Theater was one of the costliest projects in Louisville at the time.

The enormous auditorium was intricately detailed with a prominent balcony wrapping around the stage. The tiled proscenium arch must have been a sight to behold. The stage was surrounded by blue silk damask walls decorated in gold arabesques.

According to John E. Kleber’s The Encyclopedia of Louisville, the very first program at the Rialto featured a thirty-piece symphony orchestra and a screening of The Witching Hour—a silent film about the assassination of Kentucky Governor William Goebel in 1900.

The Rialto closed on July 30, 1968. A year later, it was demolished for a parking lot. Today, a large parking garage occupies the grand theater’s site.