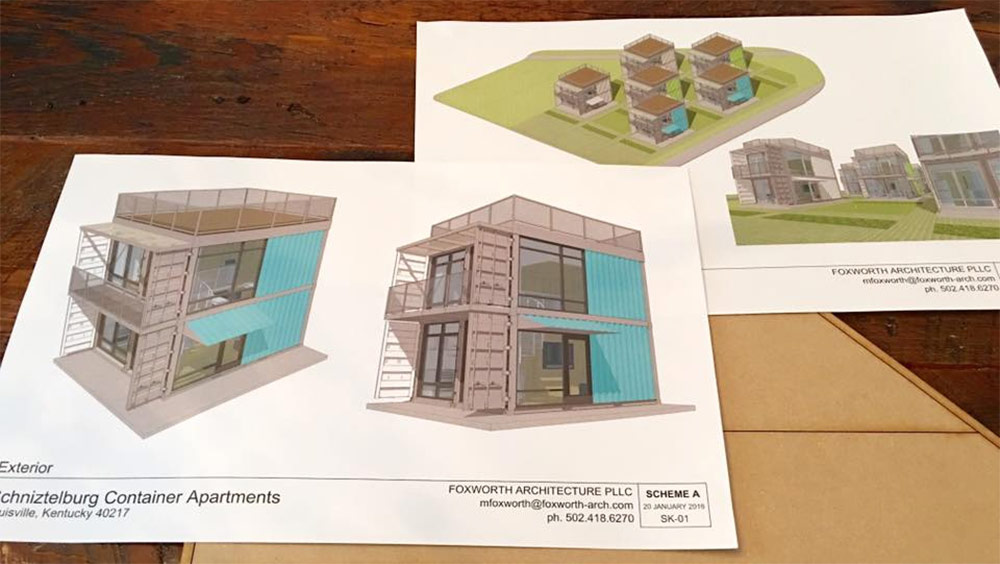 If our roundup of 16 multi-family housing projects being built around Louisville was a little too conventional for you, you may want to consider moving to Schnitzelburg. A team of investors is proposing a radically new type of housing for the city: shipping container apartments.

“We want to make an architectural statement,” Gant Hill, owner of Gant Hill & Associates and a member of the development team, told Broken Sidewalk. “Our goal is to make them fun and very unique.”

Besides Hill, the team includes Rick Kueber, founder and CEO of Sun Tan City, and Bella Portaro Kueber, owner of Bella Vita Media. The complex is being designed by Mark Foxworth of Foxworth Architecture and shipping container guru Jeremy Semones of Core Design will fabricate the units. As you may recall, Foxworth and Semones are working on another exciting shipping container community hub in the Park Hill neighborhood along Dixie Highway.

In December, the team purchased three lots on the corner of Shelby Street and Ash Street where a corner commercial building, formerly the Ash Street Station bar, burned in 2011. The grassy lot would be dotted with duplex apartment buildings, although a layout is still in the works.

Hill said the project, called the Schnitzelburg Container Apartments, is still very much conceptual and subject to change, but that there could be up to six apartment units on the site.

“We don’t know the final layout yet, Hill said. “A lot of it comes down to how we can maximize the site.” He said the team is looking at how to handle parking and provide quality green space for residents.

“Our target audience is anybody that…looks for high quality and smaller spaces,” Hill said. “Somebody that looks for something unique and different than what can be traditionally found on the market.” Hill declined to reveal rental rates for the units, but said they would be in line with existing rents in the area, such as the Germantown Mill Lofts a block north.

Hill said the proposal speaks to the larger evolution taking place in Germantown and Schnitzelburg. “It’s a vote of confidence in the momentum and energy that Germantown is currently experiencing,” he said. “We’re hoping to continue to celebrate that.”

“We feel that this design is going to really showcase the neighborhood and the semi-industrial cool aspect of that location,” Hill said. “I think the fact that we’re using a container as a structure is going to really play into the landscape of the area. It’s going to be really dynamic.”

The project has not been submitted to Metro Louisville’s Planning & Design Services for review and Hill said the team is working hard to make the project easily understandable since it’s such a new concept for residential use in the city. He said the site shouldn’t need rezoning to accommodate the apartments.

The development was unveiled by Bella Portaro Kueber in a Facebook post Wednesday that has since gone viral. In it, a series of renderings show the early design of the scheme.

If the approval process goes smoothly, the team hopes to have a model unit—or perhaps even the entire complex—built as soon as October.

“It’s a radical concept,” Hill said. But one that’s very much possible in Louisville. “This is cool,” he continued. “It’s not going to be cheap windows and doors and trying to stuff everything in a shipping container. It’s going to have modern finishes and designed for today’s lifestyle.”

The area has seen a lot of change in the past couple years. A block north, the group called Three Points, for the confluence of the Schnitzelburg, Germantown, and Shelby Park neighborhoods, continues to beautify the area with landscaping, new trees, and murals.

Farther north in Shelby Park, several groups including impact investment firm Access Ventures, have been revitalizing that neighborhood with new retail including the just-opened Scarlet’s Bakery at Shelby and Oak streets.

Closer to the development site, the Art Sanctuary is providing studio space for artists and the Dairy Del is welcoming crowds for ice cream in the summer.

“There’s just something terribly dynamic about this area—a heightened tension from a variety of elements,” Byron Hoagland, a property owner in Germantown, a private developer, and urban advocate, told Broken Sidewalk. “The original city street grid meets the eastern growth pattern, the train tracks cross Shelby Street and gently curve to the grid, the large industrial structures huddling close to the tracks, Shelby’s slight meander toward Burnett as it breaks free from the grid, the old hospital on Shelby (now a men’s treatment center), the City Incinerator.”

The area is distinctly a border condition and the shipping container proposal is taking full advantage of that. With the momentum the neighborhood is seeing with the completion of the Germantown Mill Lofts and new retail and restaurants, the Schnitzelburg Container Apartments might be just what this part of town needs.