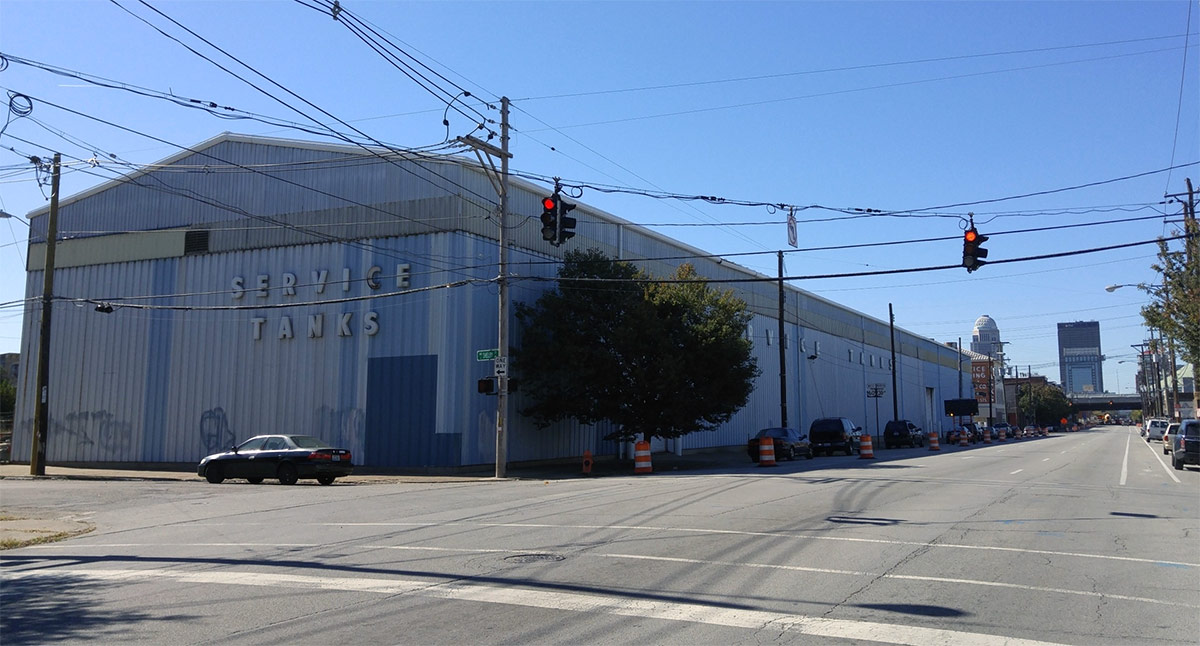 Over half a city block on the border between Nulu and Butchertown has potentially found a buyer. The Service Tanks property at 700 East Main Street had been listed for $8.9 million by Tyler Smith of PRG Commercial Property Advisors.

Smith declined to name the buyer or what might become of the property, but he did say the unnamed buyer has a contract for the entire Service Tanks property, which stretched from Shelby to Clay Streets. He said if the deal goes through, the new owner planned to make his or her own announcement about the block soon.

“I do know that’s it’s a 2.7-acre site on Main Street,” Smith said. That scale gives any buyer a lot of clout. “It’s a big deal, yes.” Smith had previously told press that there was interest in the site from across the nation, including many out-of-town developers.

Andy Cornelius, president of the Butchertown Neighborhood Association told Broken Sidewalk that there have been no rumors floating around on the street, even among other local real estate professionals. “I haven’t really heard anything about Service Tanks,” he said, “which is unusual.”

Given that the unknown potential buyer plans a public announcement and the energy currently going on in the area with the under-construction Main & Clay Apartments across the street and the planned AC Hotel by Marriott on the southern corner of the block, we expect a major project to be announced on the site, likely by an out-of-town developer.

“I think there’s a big trend for mixed-use commercial residential, and I’d hope it would be something along those lines,” Cornelius said. “There’s a great project happening now at Main & Clay and I hope that’s just the beginning of what can happen here. There’s a lot of opportunity.”

Most of the site is taken up by an enormous blue warehouse that provides a monolithic presence along Main Street. We wrote about its faded blue walls back in 2008 as part of our Big Blank Thursday series. “Even though the wall casts a shadow on nearly 400 feet of sidewalk, there is something about this building that we love,” we wrote at the time. Still, we won’t be sad to see the site transformed into something much more vibrant for the surrounding neighborhoods.

On the western side of the block, several historic structures face Main and Clay streets. “I think those are anchor points to the block and to the neighborhood,” Cornelius said of the structures ranging from one- to three-stories tall. “Hopefully whatever is being proposed for the site will be sensitive to what’s there. They’re currently in great shape and we hope that they are preserved and used in the best way possible.”

Back in 2009, a concept plan for the Service Tanks site was released showing a mix of uses and infill buildings set among the historic architecture. Service Welding & Machine Company owners Carl and Earl Grier had commissioned the concept to demonstrate what an urban redevelopment of the site might look like. Back then, food distributors Creation Gardens had planned a retail/wholesale grocery on the current site slated for the AC Hotel. According to our previous report:

Rick Hill explains that while Service Tanks will continue to operate at its current site for now, someday the property will be redeveloped into a thriving pedestrian environment. The rendering isn’t meant to suggest what will eventually be built, but is “a long-term vision of what could happen one day.” Hill says the Griers have an excellent urban sensibility and want to see the site used to its fullest potential including preservation of existing historic structures and the Billy Goat Strut alley corridor. There’s currently no timeline for redeveloping the rest of the block.

We’ll be closely watching how this deals follows through and what proposals take shape on this site and look forward to a project on such a pivotal parcel within two of Louisville’s most exciting neighborhoods. If you catch any rumors about what’s planned on this site, be sure to drop us an anonymous tip to tips@brokensidewalk.com.

[Correction: A previous version of this article said the property had sold when it should have said it was under contract. The article has been updated.]