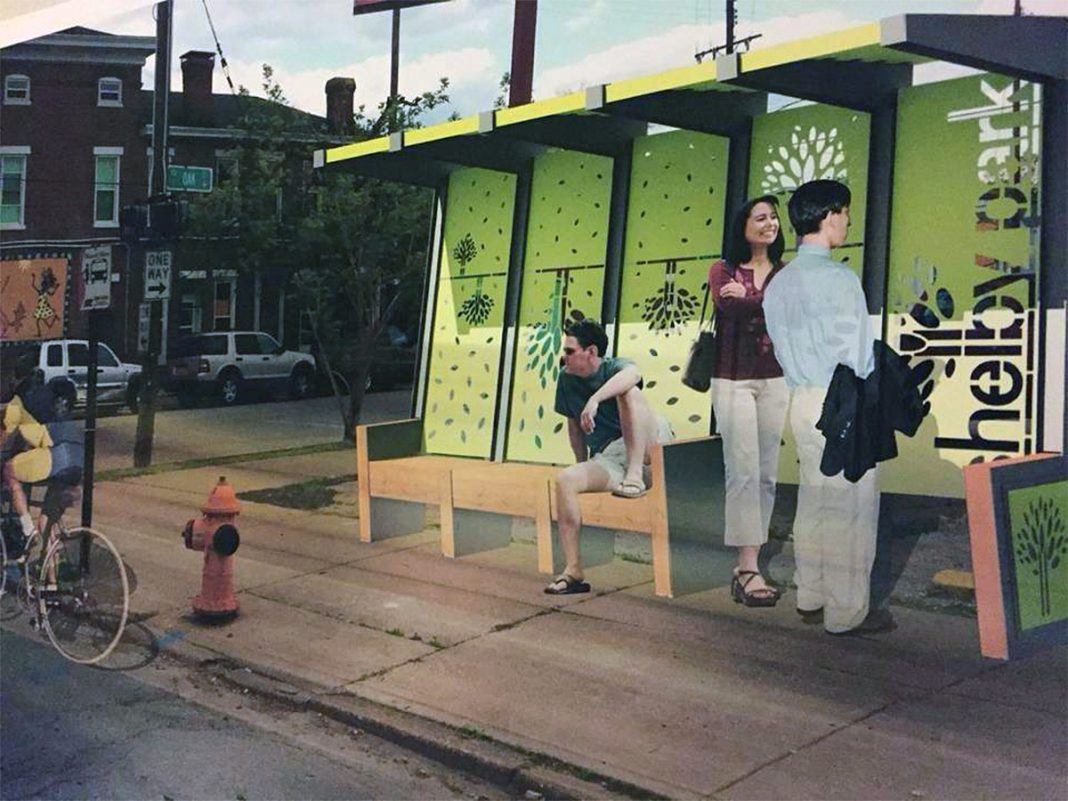 Shelby Park is about to install the second crowd-funded bus stop in Louisville. The first so-called Beta Bus Stop was installed and dedicated in the SoBro neighborhood last November.

CycLOUvia Three Points, part of Louisville’s Open Streets program, is the newest route that will stretch along Goss Avenue, Logan Street, and Shelby Street in the Schnitzelburg, Germantown, and Shelby Park neighborhoods, collectively known as Three Points as they all meet at a single intersection.

Three Points was coined by a neighborhood beautification and mural group under the same name. They’ll also be on hand at CycLOUvia launching their newest mural on Goss Avenue at Boyle Street.

CycLOUvia will open area streets to car-free use from 2:00 through 6:00p.m. along the indicated route.

Last month, crews tore up and replaced a sidewalk where the bus stop will soon rest on the corner of Logan Street and Oak Street. The new bus stop replaces a sign on a pole with a sheltered structure and benches.

“We believe small enhancements to our public spaces encourage streetlife, generate vitality in our urban neighborhoods, and promote walking, biking, and transit use,” a team of designers, planners, and neighborhood activists said on their crowdfunding Ioby page. “In addition, we want this project to set the stage for future bus stop improvements across the city.” The team raised over $8,150 for the SoBro and Shelby Park bus stops.

The Shelby Park Beta Bus Stop represents a partnership between the Shelby Park Neighborhood Association, Bicycling for Louisville, and the Metro Louisville Office of Sustainability.

The bus stop will service TARC’s Route 25 running along Oak Street out to Westport Road and Route 43 running from Portland through Downtown and out to the Outer Loop via Poplar Level Road.

Like its SoBro counterpart, the Shelby Park bus stop includes benches, transit and bicycle maps, and a large dose of design using many local and salvaged materials. The design uses simple components designed for their replicability.