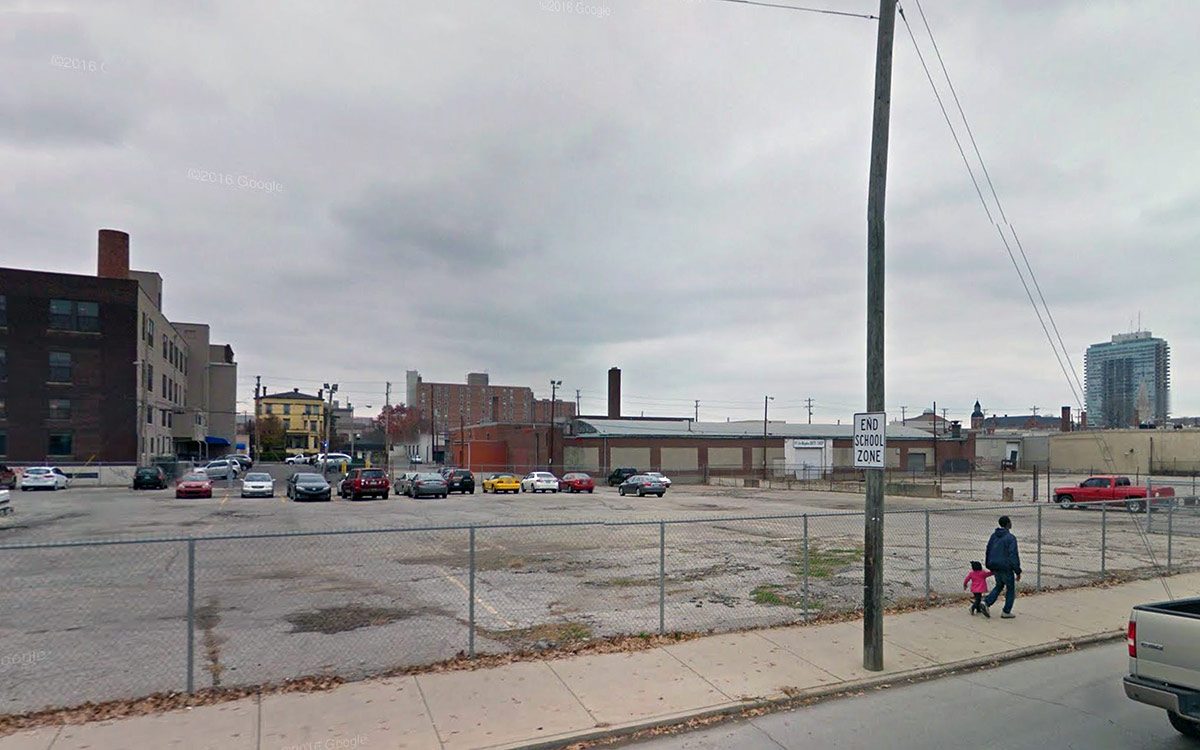 Over the weekend, Spalding University announced it’s putting the demolition of the historic Puritan Uniform Rental Building for a parking lot on hold. But the university is slowly moving forward with plans to remove a large parking lot at the other side of the block. The 1.72-acre parcel on the northwest corner of Second and Kentucky streets will eventually be converted into a recreational field for Spalding students.

The mega-block bound by Breckinridge Street, Third Street, Kentucky Street, and Second Street in the SoBro neighborhood is more than double the size of a normal Louisville block—1,100-feet long versus around 450 feet on a square Downtown block. SoBro’s block sizes are as much a challenge for the neighborhood’s walkability and development as its nationally famous expanses of asphalt, but that’s a story for another day.

Well over half the block is covered by asphalt, but with the addition of the planned recreational fields, at least there won’t be quite as much paving contributing to Louisville’s urban heat island effect. (Above: The parking lot site of a future recreational field. No official plans or renderings are yet available. Mockup by Broken Sidewalk.)

“At this point, we don’t have a plan, meaning something that’s actionable. What we have is ideas,” Beth Newberry, director of Media Relations & Executive Communication, told Broken Sidewalk on Friday. Keeping true to Spalding President Tori Murden McClure’s goal not to use tuition money for sports fields and student amenities, Newberry noted that the project will be funded through private donations. Fundraising is currently underway. “It’s in the brainstorming and fundraising stage,” she said.

Newberry said the site at 960 South Second Street is often referred to as the “LG&E Property,” and property records show it is still owned by by the utility. Originally residences, the property was the long-time site of V.V. Cooke Chevrolet and later Nordic Motor Works. V.V. Cooke announced it was closing in late 1981 amid recession along with neighboring dealership Summers–Hermann Ford on Third Street. The Cooke property then covered six acres in the surrounding area. It has remained a vacant sheet of asphalt for many years.

There’s no formal design for the space yet. President McClure previously told Broken Sidewalk that she had planned to install tennis courts on the site, but feedback from students revealed a bigger need for informal recreation space. Somewhere, for instance, where students could throw a frisbee. Newberry said the site is too small for an official playing field, but the eventual design would be “something that would fit the space.”

McClure said the nearby Mother Catherine Spalding Square, a large green space on Breckinridge between Third and Fourth streets, was designed more for its green infrastructure than recreation and drains in the lawn create a tripping hazard for active uses. Newberry also noted that this recreational space will be different from the planned athletic fields at Eighth and Kentucky streets, where a series of historic warehouses were demolished by the Dover Corporation several years ago. That multi-million dollar project is also in the fundraising stage, with over $1 million raised so far.

“[There’s] no set timeline, but that space will no longer be a parking lot.” Newberry said. “Its conversion to green space is part of one of Spalding’s strategic plan initiatives to green [the] campus and surrounding environs.”

The recreational field at Second and Kentucky is next to a single-story structure where, earlier this year in June, a mural was painted by the community. (Watch a timelapse here.) The mural, designed by Kentucky College of Art & Design student Lionel Jones, depicts cyclists, the Presentation Academy building, and the 800 Building, according to an article at Boxing Junkie. The design was chosen by a jury last fall. The structure is used for storage by Spalding.