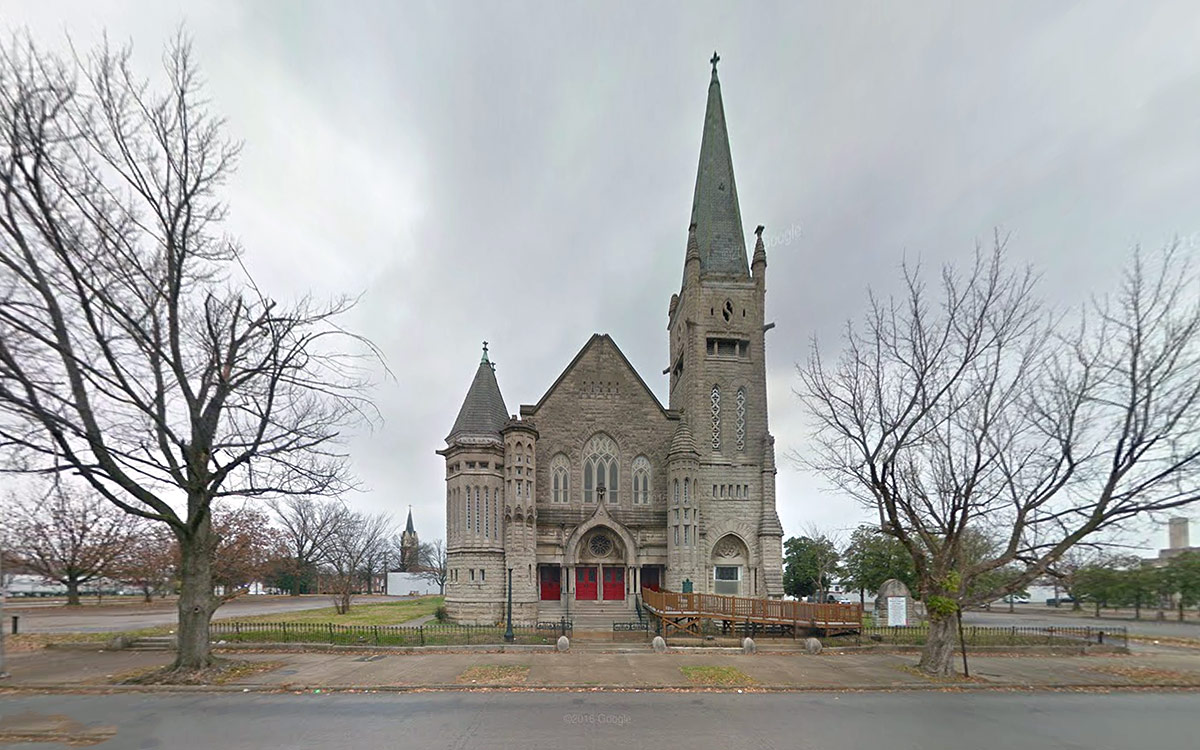 Clarke & Loomis’s exuberant Gothic-Revival St. Peter’s United Church of Christ still stands tall over West Jefferson Street after 121 years in the Russell neighborhood. It’s one of a handful of pre–World War II structures that were spared the wrecking ball in Louisville’s notorious Urban Renewal era that leveled most of the city west of Fifth Street.

The church, tracing its roots back to 1847 when it was known as St. Peter’s German Evangelical Church, has again fended off the wrecking ball as its congregation has struggled in recent years to adapt the historic church to modern times.

With mounting maintenance costs and accessibility issues for some in the congregation, plans were floated in 2014 to demolish the structure and build a new facility when the congregation of 100 moved to a rented space in the Russell Plaza strip mall at 15th and Jefferson streets.

After outcry from the Louisville Historical League, among others, those plans were quickly reconsidered. Rev. Jamesetta Ferguson, senior pastor at St. Peter’s, began to look creatively at how to keep the monumental limestone structure flanked by large towers.

And that’s certainly welcome news after so much of the neighborhood has been relegated to the landfill, including the church’s century-old parish house that once stood just west of the church.

“St. Peter’s is a highly decorative and three dimensional handling of the Gothic Revival style,” the structure’s 1980 National Register of Historic Places listing, by Marty Poynter Hedgepeth, reads, describing the structure as an excellent example of its style. “The building is one of the most beautifully detailed works of the prominent Louisville architectural firm of Clarke & Loomis.”

But this story is better than just saving the church—it’s about building back the neighborhood fabric to create a support structure for the congregation.

Philadelphia-based urbanism publication Next City recently investigated the larger plan to tear down and rebuild the Beecher Terrace Houses across the street from St. Peter’s. Author Oscar Perry Abello spoke with Ferguson, using St. Peter’s as a symbol of the area’s regeneration.

According to Abello, to save the church, Ferguson teamed up with the United Church of Christ’s Church Building & Loan Fund (CB&LF) to help create a growth strategy. “Rather than a loan for facility repairs,” Abello wrote, “the fund connected church reps to resources that could help them craft a plan to leverage a key asset: the property.”

That partnership brought St. Peter’s together with Bronx, New York–based AIM Development Group on a new construction project on the church’s parking lot.

Today, St. Peter’s is flanked by two large surface level parking lots on either side, reflecting the lack of neighborhood fabric characteristic of the larger neighborhood.

St. Peter’s plans to break ground this year on a $7 million retail and office building on the corner of Jefferson and 12th streets. According to Abello, 70 percent of the total budget comes from CB&LF.

“The eventual rental income from that development would fund the rehabilitation and maintenance of St. Peter’s original church building,” Abello wrote, “with what’s left going to support church programming.”

In a letter to the city describing the project, Ferguson said that restoration would would involve interior and exterior rehabilitation, repairing water damage, and removing lead paint, among other issues. A 1950s addition in the back of the church has deteriorated more than the historic structure and would be razed.

Last month, Ferguson submitted the church’s pre-application to rezone its parking lots from R-7 to C-R to allow for the new building. In it, the pastor described St. Peter’s block-long presence across the street from the to-be-redeveloped Beecher Terrace Houses as part of its significance to the evolution of the neighborhood.

“Our priority is improving the quality of life and opportunities available to the residents of Beecher Terrace and the surrounding community,” Ferguson wrote in her letter to the city. She serves on the Russell Choice Neighborhood Task Force, Abello wrote, which helps guide the Louisville Metro Housing Authority in the process of replacing Beecher Terrace.

The first phase of the project will construct a two-story, 30,000-square-foot building, designed by Jeffersonville’s Kovert Hawkins Architects, on the eastern parking lot, currently housing 66 parking spaces. The L-shaped structure wraps around the corner of Jefferson and 12th streets, masking a new parking lot behind the structure.

The building would house, among other things, offices for the church’s Molo Village Community Development Corporation, youth and senior programs, meeting space for health and counseling services, space for an Alcoholics Anonymous chapter, and storage space for Dare to Care’s food pantry.

According to Abello’s report, CB&LF partnered St. Peter’s with St. Louis–based wealth-building nonprofit Justine Petersen to help locals build their own credit through “financial literacy workshops” to be located in the building.

This development appears to mark the reversal of a decades-long trend of urban churches attempting to use parking lots as draws to bolster dwindling congregations. Many churches with the best of intentions have permanently scarred their neighborhoods, so it’s especially heartening to see this new effort that dually benefits the neighborhood and the church.

“Our pitch will be that we are within one mile proximity of downtown, that downtown is extending west, and we are right there in an area that will complement that growth,” Ferguson told Abello.