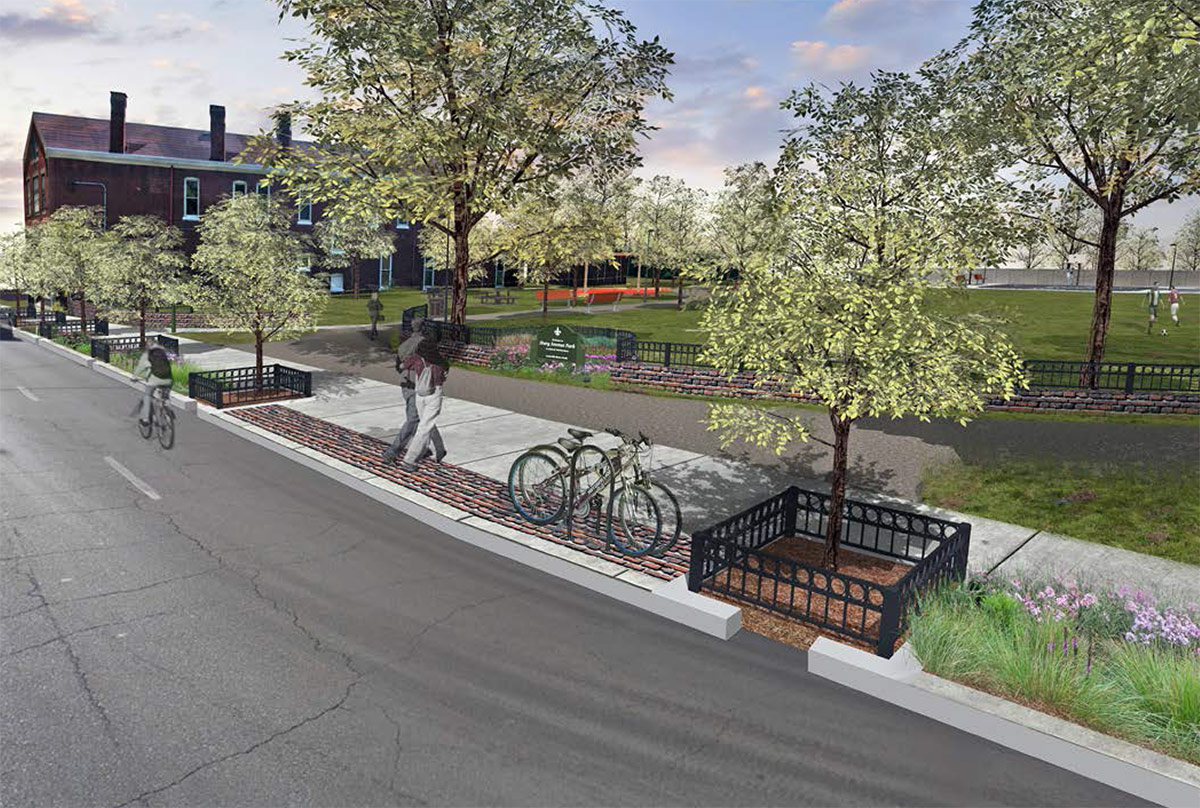 When you look down from a mile up, it’s unmistakable: Butchertown has been, well, butchered, sliced, and laid out on a charcuterie board. Over here you have a selection of cured sausages, excuse me, historic shotgun houses. Over by the jam, sorry, Beargrass Creek, an array of prosciutto and bacon. Swift is the stinky cheese. There you have a St. Joseph’s Church poking out of a crock of pate. Spaghetti junction is one giant slice of bread. Wash it all down with a glass of brandy.

While the metaphor might be welcome on an artisanally arranged table at the Butchertown Grocery, the scene is no way to plan a neighborhood. Yet that’s essentially what Louisville has allowed to happen to one of its most cherished quarters. Butchertown is sliced off from Downtown by a hefty Interstate 65, cordoned off from its waterfront by a sprawling Spaghetti Junction, tied in knots again by Interstate 64 and a serpentine flood wall, criss-crossed by a wild creek and some freight train tracks, and generally gutted by an industrial meatpacking plant. It’s hard to find a center where the neighborhood comes together.

But don’t fault Butchertown for not trying to find one. The neighborhood has proved time and again to be one of the most resilient in Louisville. And it’s again laying out another ingredient—this time a park—in hopes of pulling itself together.

In our meaty metaphor, Story Avenue Park is the chewed up gristle spat under the napkin. While the green space is over a century old, located just east of Adams Street on Story, the park today looks more like a leftover scrap of land tacked on the side of Interstate 64 than it does a proper playground.

A three-year effort by neighbors to spruce up Story Avenue Park is a testament to just how much Butchertown is in need of real public space—and how much people are willing to put up with to get it. Story Avenue Park dates to at least 1912 when it was listed as one of 14 children’s playgrounds across the city. (We assume it was that vacant lot in the above 1905 map.) A century ago, it was a lively play place, but like the rest of Butchertown, it has evolved with a bit of grit through the decades. After significant floods in 1937 and again in 1945, Butchertown and its playground were in need of some work. Much of the neighborhood was torn down, more of it was walled off, and by 1947, Story Avenue Park was described by the City Controller as filled with litter, broken equipment, and dirty restrooms.

Updates came in the 1950s, when the park at 1519 Story Avenue was remade into the East End Optimists Club, later the East End Boys Club, and eventually a Boys & Girls Club. In 2013, the structures housing that club were removed, creating a blank open canvas and spurring neighborhood interest in revamping the site.

After charrettes and public meetings, a plan to redo the 1.83-acre Story Avenue Park began to emerge. The design is simple, centered around a ten-foot-wide walking path circling the parcel.

A pervious driveway is shown connecting between Story Avenue north to Washington Street (formerly Maiden Lane) along a stretch of flood wall. A new pervious parking lot sits next to a basketball court. South from here, a swing set and picnic tables with grills are shown. Along Story Avenue, a low reclaimed brick wall and a new sign mark the entrance to the walking loop. The center of the park remains an open lawn.

The total budget for the new Story Avenue Park is $420,000, according to a report by Sheldon Shafer in the Courier-Journal. Three businessmen—Mac Thompson of White Clay Consulting, Mark Prussian of the Eye Care Institute, and John Moore of Atria Senior Living—are behind the park push.

To finish the park, backers are looking to raise the final $40,000 and have planned a fundraiser on Thursday, July 14 at Butchertown Grocery, 1076 East Washington Street, where you could find yourself in front of a selection of craft charcuterie. Watch out for the Époisses de Bourgogne. A website has also been launched if you’d like to donate online.

While it remains to be seen whether cosmetic upgrades to a sliver of land next to a highway can create a real community space, Story Avenue Park has momentum behind it. “We want to develop a neighborhood back yard, a safe place to walk at night and a more positive face to I-64,” Thompson told Schafer. And perhaps that’s what the park will do—serve as a backyard for neighbors looking to get out and grill or host special events, rather than a central square uniting a dishevelled urban area. It’s certainly worth a shot.