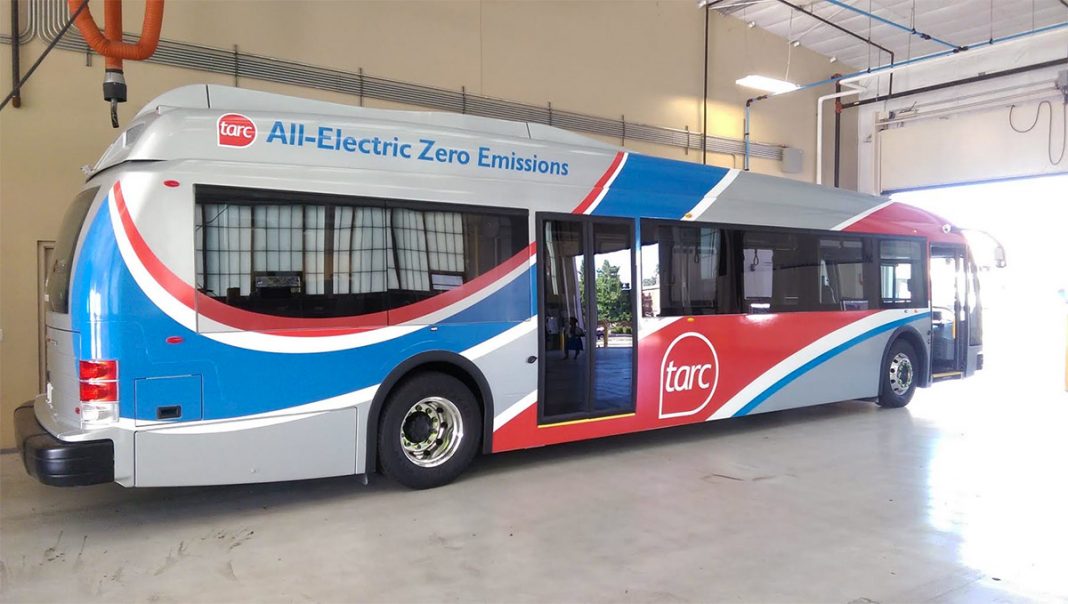 Have you ridden on the ZeroBus yet? Those big-eyed futuristic buses have been circling through Downtown fare-free for a year-and-a-half now—and they’re all electric. This week, TARC, the Transit Authority of River City, rolled out its next generation of electric buses, larger and longer, set to run on Route 4 along Fourth Street between Downtown and Iroquois Park.

The six new buses plus a fleet of nine ZeroBuses make TARC the second largest electric bus operator in the country, according to the authority, and the largest east of the Mississippi River.

One of these six new buses was actually acquired earlier this year as a trade for the tenth ZeroBus from manufacturer Proterra, which no longer makes the smaller model. As we previously reported in April:

In February 2015, TARC announced it received funding for five more electric buses, and [Kay] Stewart said because of the mix-up, Proterra is now making that order six so the total number of buses will still add up.

Route 4 covers many of Louisville’s top destinations, making it one of the city’s top bus lines. “They stop at or near Museum Row downtown, the University of Louisville, Speed Museum, Churchill Downs, the Kentucky Derby Museum, Old Louisville, restaurants, hotels, and much more,” TARC wrote in a press release.

One major perk of these new electric buses is their zero point source emissions. Diesel, and even hybrid, buses are notorious polluters. We’ve all seen the plumes of thick exhaust that sometimes accompanies a fast start. No such problem with the electric equivalent. That doesn’t mean these buses are pollution free, though. Rather than pollute the streets of Louisville, where we walk, bike, and breathe, their electricity is generated more efficiently at a central power plant.

According to TARC, these larger buses are “more than 40 feet long with seats for 38 compared to the 31-foot ZeroBus which seats 31.”

The six new buses include bike rack space for three bikes, like traditional buses in the city. Also like regular buses, the new electric Route 4 will carry a standard fare of $1.75 one-way for an adult. The Fourth Street route was chosen for the new electric buses so they can share the same charging infrastructure that was built for ZeroBuses.

The Federal Transit Administration provided $3.3 million of the $4.65 million cost of the new buses in the form of a Low or No Emission Vehicles Deployment Program grant. Additional federal and local funding covered the rest.